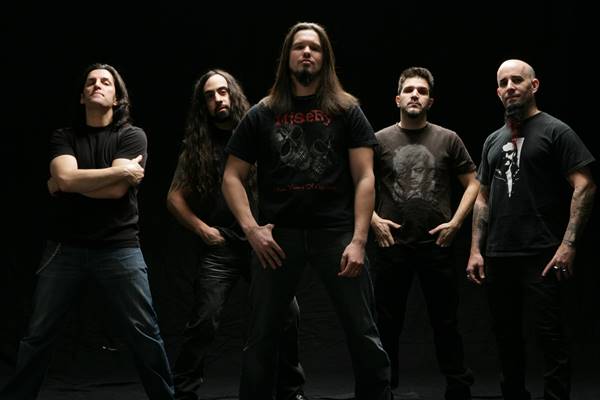 Can you imagine a version of Black Sabbath’s “Children of the Sea”… only with Ozzy on vocals instead of Dio? What about Iron Maiden’s “Dream of Mirrors” with Blaze Bayley singing instead of Bruce Dickinson? Or Periphery’s “The Walk” with Chris Barretto in place of Spencer Sotelo?

Believe it or not, all of these almost happened… in fact, some of them did kinda happen, and have found their way online over the years, giving us a glimpse into some of metal’s most notable What if…?s.

Sabbath reportedly spent close to a year working on the album that would become Heaven and Hell before they finally sacked Ozzy Osbourne and replaced him with Ronnie James Dio. Tony Iommi has even said he has a demo of “Children of the Sea” with Ozzy on vocals — although Dio completely re-wrote the lyrics and melody after he joined the band.

Alas, that Ozzyified “Sea” demo hasn’t found its way out of Iommi’s personal vault… yet.

The Guns N’ Roses-adjacent glam band actually switched singers — from Paul Black to Phil Lewis — in-between getting signed and the recording of their eponymous debut. As a result, Black retains credit on more than half of the record’s songs.

There’s plenty of pre-Lewis live bootlegs floating around out there, but our best insight into how a Black-sung L.A. Guns would have sounded comes from this demo of the song “One More Reason to Die” (the title was shorted to “One More Reason” for the final release):

The chapters about the making of this album are some of the most entertaining in The Dirt, but for understandable reasons (i.e., it makes the band look bad), they didn’t make it into Netflix’s movie adaptation.

The short version is this: the band’s self-titled 1994 album, which was their first with John Corabi on vocals in place of Vince Neil, tanked. Members of the band’s management and label teams quickly began pressuring them to reunite with Neil. The band initially refused… but recording sessions for the album that would become Generation Swine were ROUGH on Corabi, who says that the band’s three producers — bassist Nikki Sixx, drummer Tommy Lee, and Scott Humphrey — would give him wildly conflicting directions, asking him to somehow simultaneously sing in the styles of David Bowie, Nine Inch Nails, Oasis, and Pantera.

Of course, eventually, the band did reunite with Neil… but didn’t write any new material to suit the vocalist: “The songs weren’t written toward Vince’s singing style or even his range,” Humphrey admits in The Dirt. Which explains why four songs on the album — “Find Myself,” “Beauty,” “Rocketship,” and “Brandon” — feature lead or co-lead vocals by Sixx or Lee.

Three of Brave New World‘s songs — “The Nomad,” “Dream of Mirrors,” and “The Mercenary” — were originally written for 1998’s Virtual XI, and vocalist Blaze Bayley has long maintained that, despite a lack of official credit, he co-wrote the lyrics for “Mirrors.”

Guitarist Misha Mansoor and various iterations of Periphery’s line-up were working on this album for years before it was eventually released with Spencer Sotelo handling lead vocals. Given that and the band’s Internet-compatibility level, naturally some demos of pre-Sotelo versions of these songs — featuring Chris Barretto (Monuments), Jake Veredika, or Casey Sobol — or have found their way online.

Oy. Where to start with this one?

After 2003’s We’ve Come for You All, the band reunited with “classic” ‘Thrax members Joey Belladonna and Dan Spitz. Then, after the reunion tour, they once again parted ways with Belladonna and Spitz and may or may not have tried to lure back Belladonna’s successor-turned-predecessor, John Bush (Armored Saint), which didn’t work out for whatever reason. Then they approached Slipknot’s Corey Taylor, who says they sent him demos of songs that would eventually end up on Worship Music. Taylor wanted to front the band, but he says his label and management put the kibosh on that idea because, well, $lipknot.

Then the band decided to roll the dice on hiring a completely new frontman, and settled on the basically-unknown Dan Nelson. They reportedly recorded Worship Music, in its entirety, with Nelson on vocals. Then Nelson either quit or was fired, depending on who you believe. The band once again attempted to reunite with John Bush, but Bush ultimately declined to be on Worship Music because the band wouldn’t let him re-write the lyrics and vocal melodies. Fortunately, Joey Belladonna had no such qualms, and thus, we have the Worship Music we have today.

While the Nelson-fronted version of Worship Music will probably never see the light of day, the band did give some of the album’s songs their live debut (sometimes with alternate titles) during Nelson’s tenure, giving us a glimpse into what might have been (for better or worse).

Sponsored Links from Across the Internet
Show Comments
Related Articles
This Sucks 0
Ozzy Says His “Touring Days Are Over,” Cancels Upcoming UK/European Tour Due to Health Issues
February 1st, 2023 at 8:00am Hesher Keenan

Metal Sucks Greatest Hits
0 -
That Time Shaun Got Drunk and Filmed a Music Video with His Cat
0 -
Who are teh “BIG FOUR SCENE BANDS”????
0 -
BREAKING: Some Local Band Called Shrapnel are Tired of You Leaving the Show Before Their Set
0 -
Rigged: Jeff Loomis
1480 -
Being in a Band is for Losers [Scientific Proof]
0 -
The Best Metal Albums of 2013, As Chosen by Metal Musicians Themselves — Part I: Machine Head’s Robb Flynn