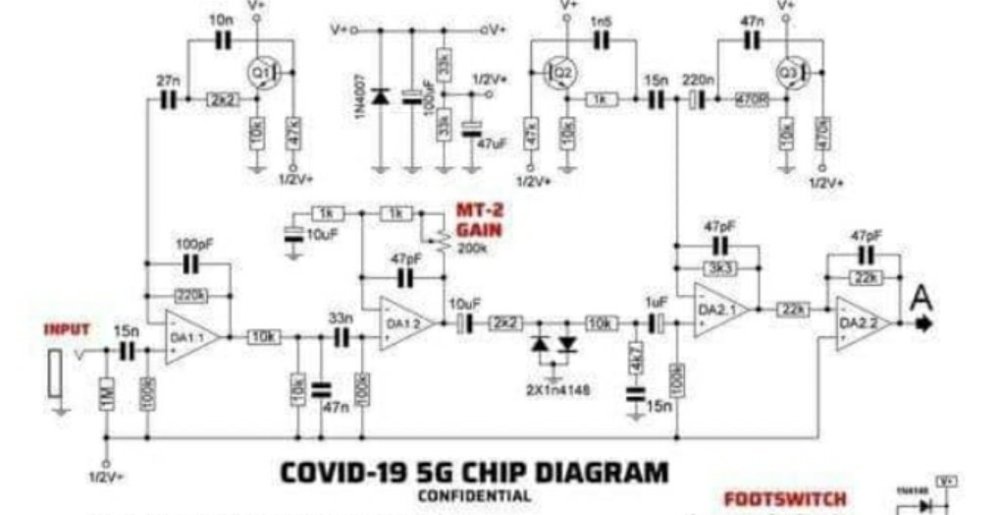 The Covid-19 vaccines currently being rolled out, a conspiracy theory goes, contain 5G cellular microchips that will be used by the global elite — the same folks who orchestrated this pandemic, naturally — to track and control the world population. Get the vaccine and you’ll be a robot slave forever.

That theory is pure bullshit on the surface but has been also been thoroughly debunked, in case you’re a skeptic. But that hasn’t stopped it from spreading wildly, resulting in what are sure to be millions who refuse to be vaccinated and dozens of cell towers across the world set ablaze.

The latest twist to the 5G theory hits close to home for us metalheads. An image that’s allegedly been circulating in internet conspiracy theory circles (mostly in Italy) features what purports to be an electrical schematic of the chip itself that will be used by our overlords to control us. Only it’s actually a diagram of the internal wiring of Boss’s infamous Metal Zone pedal (the MT-2). Here it is:

You’ll notice the diagram has barely been changed from the original — it features “treble,” “mid” and “bass” circuits, odd to see in a cellular chip, and even says “MT-2” on it — but that hasn’t stopped the image from spreading, according to Twitter user Mario Fusco, whose post has gone viral.

The link featured at the top of the schematic contains some text explaining how the chip works, originally in Italian but translated here by Google. Indeed, reading through, it’s hard not to imagine this is just an elaborate troll, and MetalSucks has not been able to verify that conspiracy theorists are actually biting on this. But it sure is an entertaining read — with a little wink to gear nerds who know the MT-2 notoriously sounds like crap — and it’s not far-fetched to think the loonies who think vaccines contain 5G chips would also believe this crap.

“The Russians have managed to remove the nanochips from the Pfizer vaccine and have published a diagram of functions! I will take you all for a walk in a short time

“The chip consists of only 4 processors and 4 transistors. The signal through the 5 G network enters on the left on the INPUT. That’s how they control you

“Power is done through body heat and all parts are connected to that tension. The signal is processed in the first processor with a frequency filter and transistor that reinforces it.

“The increased signal continues to move to another processor controlling the MT-2 GAIN or how much impact it will have on your psyche. This control is variable and can strengthen it or reduce it to desire. In the original recording that party is said to have, I quote: ‘A heinous sum of income’, which is very bad.

“The silicone diodes control the electrical energy that allows the virus to be activated in vaccines, then it all goes through another step of signal strengthening and filtering out external influences – preventing doctors from detecting your chip scanner, literally hiding it The TL0 72 is a very expensive processor and is mostly used for military purposes, you can only get it with a mortgage or so.

“The BASS and TREBLE controls adjust the instructions that can be heard in the head, every man is different and, depending on whether you are a woman or a man, can ask you to adjust the frequency. It is also a 5G FreQ control that shifts the central control for a stronger ′ ′ impact ′ ′ if the immune system is extremely powerful.

“The VOLUME control is used for the overall power of the chip, which is sometimes sensitive to your frequency. from personal vibrations, it depends on whether you are at the stage of happiness or generosity or sadness.

“OUT introduces detox toxins into your body as by-products of the chip functioning.

“You will notice that there is also the FOOTSWITCH control on the graph, it serves to hide in different parts of the body during the daily movement, recognizing the pressure points on the leg.

“They thought of everything, but they didn’t count on good people all over the world!

If only we could customize these chip injections for more fine-tuned control! We’d make sure Kirk Hammett gets one that nullifies the effects of his wah wah and I’d like to place an order for a chip with circuitry that makes me sound like Zakk Wylde.

Sponsored Links from Across the Internet
Show Comments
Related Articles
News 0
New Profile of High On Fire’s Matt Pike Spotlights the Anti-Semitic Origins of His Conspiracy Theories
May 25th, 2022 at 9:24am Emperor Rhombus

NPR’s article tackles how Pike’s conspiracies are tied to those of anti-semitic author David Icke.