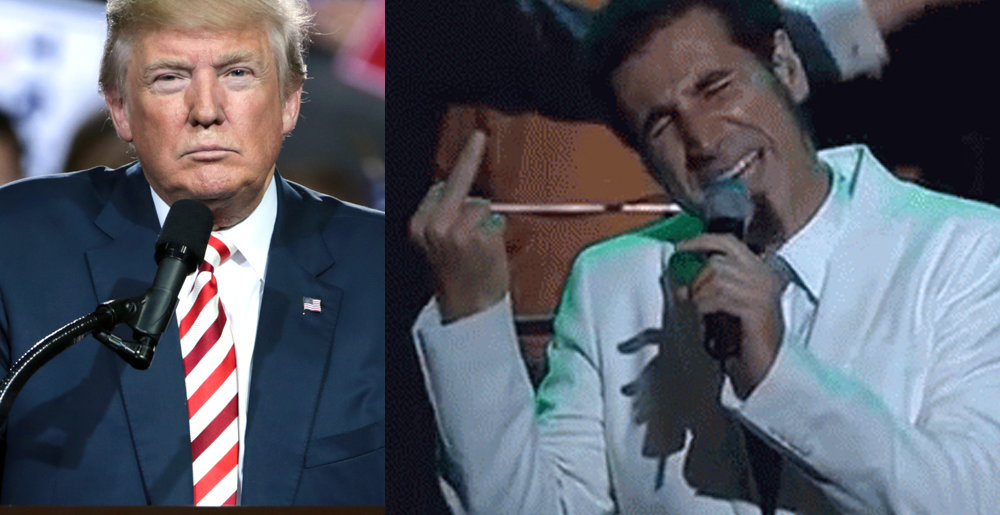 Metal musicians are (mostly) celebrating Apricot Shits’ farewell from the Oval Office today. But it looks like the former Commander-of-Grief managed to piss off one last last notable artist on way out the door.

System of a Down’s Serj Tankian has slammed the now-ex-president for signing a ‘Memorandum of Understanding’ with Turkey as one of his final acts in office. Although a press release from L’orange Stupide’s administration says the agreement “protects Turkish cultural property,” The Armenian National Committee of America (ANCA) calls the accord “a disastrous bilateral U.S.-Turkey Memorandum of Understanding granting Turkey legal rights over the vast religio-cultural heritage of the region’s indigenous peoples and other minority populations.”

“Thanks Trump. In your last minute you decided to grant Turkey my people’s indigenous cultural heritage including ancient churches and stone crosses as a reward for them trying to exterminate us. Never seen a president suck so much cock.”

Although I wish we could all retire expressions that create negative connotations regarding oral sex, I completely understand Tankian’s rage. Especially since Dumdum Drumpf probably only agreed to the deal because he thinks turkeys come from Turkey and he doesn’t wanna be deprived of any delicious meals in the future.

You can view Tankian and ANCA’s respective posts below.

John Dolmayan has not commented. But I assume he’d argue that it was actually ANTIFA who signed this agreement.

Tankian is scheduled to release a new EP, Elasticity, later this year. It will be a collection of songs he wrote for, but were ultimately rejected by, System of a Down.

Tags: Donald Trump, serj tankian, system of a down

Metal Sucks Greatest Hits
0 -
Op-Ed: When Did Slayer Start to Suck?
0 -
Give a Heavy Metal Valentine’s Day Card to Someone You Love
0 -
For $16,000, Ted Nugent Will Stay the F*ck Away From Your Town
0 -
That Time Shaun Got Drunk and Filmed a Music Video with His Cat
0 -
Students at British School Sing Iron Maiden’s “Flight of Icarus”
0 -
Exclusive Interview: Lamb Of God Drummer Chris Adler on Randy Blythe’s Imprisonment, Upcoming Tour and the Future of the Band