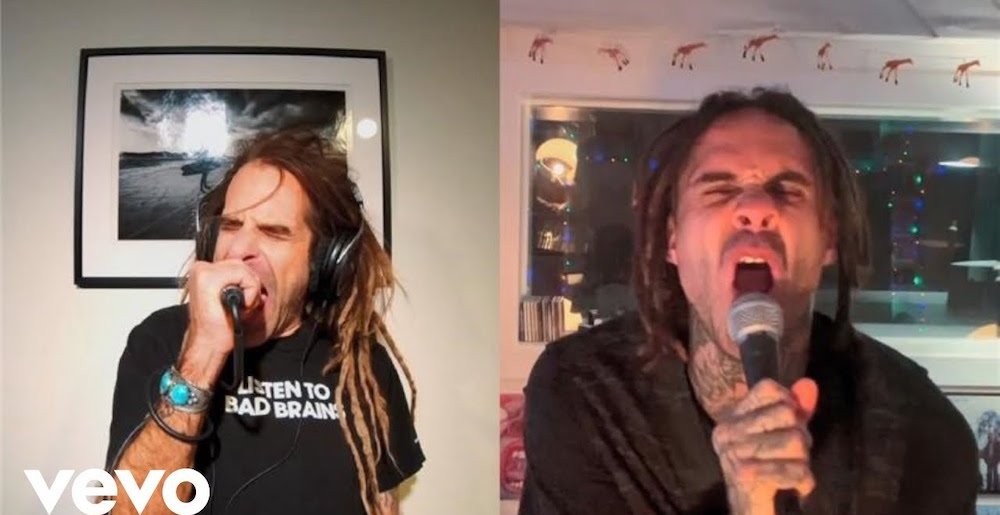 Lamb of God have premiered a live quarantine cover of the Bad Brains classic “I Against I” featuring Fever 333 vocalist Jason Aalon Butler. You can check it out below.

Says Lamb of God vocalist Randy Blythe of the performance:

“The idea to cover ‘I Against I’ goes back at least 20 years to a camping trip the band was on. Mark [Morton, LoG guitarist] and I were sitting in the back of our buddy’s Jeep ripping through the mountains, Bad Brains was cranking on the stereo, and I was singing along to that particular song. Mark looked over at me and said ‘We should cover that tune.’ So we thought about it for a couple of decades and finally got around to doing it for the Burn The Priest Legion: XX record (hey, sometimes we move a little slow…)

“As we all know, this pandemic has sucked for live music, but the quarantine jams bands have been doing have been pretty fun, especially when you bring in guests. I saw Fever 333 for the first time at the Sonic Temple fest— I had never listened to them, but I was blown away by their live show. I remember thinking ‘Man, these dudes are WILD- their energy reminds me of the punk shows I saw in the ’80s’ and I’ve been friends with those dudes from that day. I even texted Darryl from Bad Brains that afternoon to tell him to check them out. It was only natural to ask Jason to join us and bring that energy to this song by the almighty Bad Brains, my favorite band of all time.”

“It is truly an honor to be a part of this one as I have the utmost respect for Randy and the boys since becoming homies after having my mind blown when I looked over at the side of the stage at Sonic Temple Fest and saw him watching us play. It’s been a pleasure getting to know him and an honor to rock L.O.G. celebrating one of the most important punk rock/musical acts of all time Bad Brains. From legends to legends to the student. All love.”

Lamb of God recently released the three-disc Lamb off God (Deluxe Version) and vinyl edition of the Lamb of God: Live in Richmond, VA component of the set. The CD/DVD set features the critically acclaimed 2020 release with two bonus tracks and a live version of the album, along with a DVD featuring the first of LAMB OF GOD’s two ultra-successful livestream events from the fall.

In addition to performing Lamb of God in its entirety, the performance features an encore of four songs including “Ruin,” “Contractor,” “512,” and the debut live performance of “The Death Of Us,” a new song the band wrote and recorded in quarantine for the Bill & Ted Face The Music movie and soundtrack. The DVD also includes a new director’s cut with bonus material. Digital copies contain only Disc 1 and Disc 2.