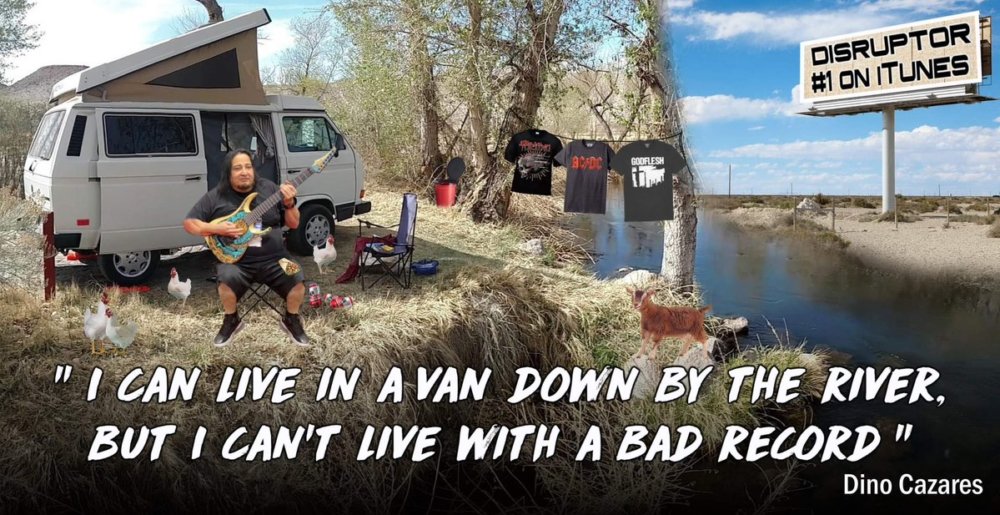 The pending arrival of Fear Factory’s new album, Aggression Continuum, continues to see no shortage of theatrics in the press, with band mastermind/guitarist Dino Cazares and now-former vocalist Burton Seabell continuing to talk about one another in the press (thanks in no small part to never-ending questions on the split from journalists, and understandably so).

Seabell quit the band last year after Cazares launched a Crowdfunding campaign to finish Aggression Continuum, which was first recorded in 2017. Burton called the fundraising effort a “scam,” and distanced himself from the project, but his vocals still appear on the final product.  It later came out that Cazares had previously acquired 100% of the rights to use the Fear Factory name in a years-long court battle.

In a new interview with Metal Hammer, Cazares has elaborated on how he came to own 100% of the Fear Factory name, as well as talked a bit about how his relationship with Seabell ended.

Explaining the exact legal framework through which he acquired full rights to the Fear Factory name, he said:

“When you file a Chapter 7 bankruptcy, you have to list all your assets – your computer is an asset, your car, your house, your businesses, your trademarks. If you fail to list anything there, they’ll take it from you.

“That’s what happened to Burton. They took the trademark from him because Raymond and Christian’s attorneys discovered that he never listed the Fear Factory trademark as an asset.

“Because Burt failed to list it in his bankruptcy, he was not able to own it again. And if I bought it, I couldn”t gift it to him, because the courts would think I was defrauding them and we were in collusion to give it right back to him.

“So it was up for auction and I was trying to oubid the highest bidder – and those people were Raymond and Christian as well. It was intense. I was sweaty.”

When asked how Burton told Dino about his departure, he answered:

“He didn’t. He did what he usually does, where he kind of disappears. That’s the guy I know – when the going gets tough, he likes to run. He quit in 2002, he quit the other guys in 2007, and now he’s quit again. Even though he’s been on every record, he’s also been the one that quits.

“I like to address problems head on. If there’s a problem, let’s get in a room, let’s duke it out, let’s solve it. Some people may feel like they’re being put in a corner and can’t handle that. That to me is how he was.”

Asked whether he thinks his ownership of the Fear Factory trademark drove a wedge between he and Burton, he answered:

“I don’t really know, other than what he said, why he left. Because he never spoke to me about it. Again, he ran away. If you have an issue with me, just tell me. Why take it out there in the media? That’s just old school.”

“I don’t know what he’s so bitter about towards me, but it always seems like since day one and I say this laughingly – I’ve always gotten blamed for every ex-band member that left. I get it: people need a scapegoat, people need to pass the buck onto somebody else. But I’m a strong individual, and I can handle it. I always feel if you put out some great music, people forget about all the drama. Sure, people might bring it up on social media, but when the music comes out, it’s, like, “Maybe Dino’s a dick, but fuck, listen to this song.”

You can read the full interview, which includes a lot more on the above topic, right here.

Aggression Continuum comes out on June 18.