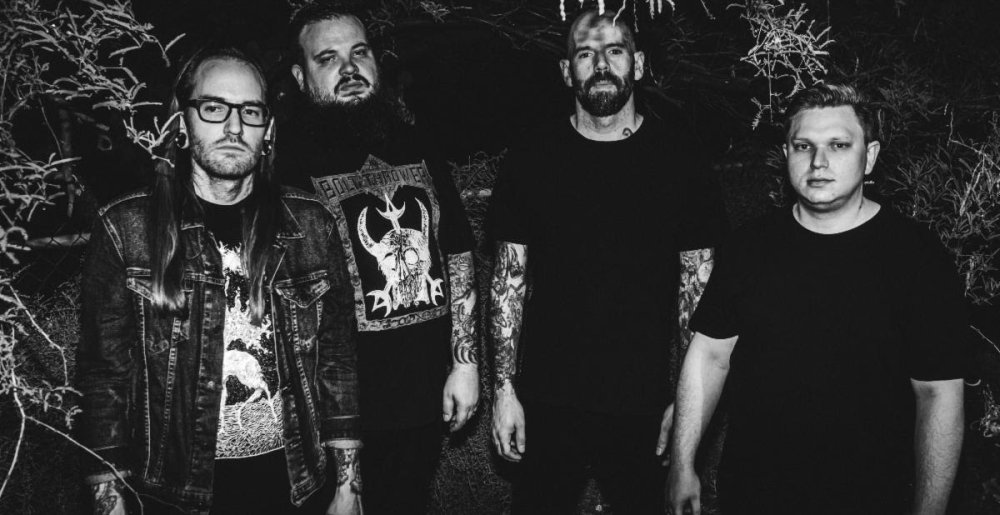 Born from the ashes of pain, suffering, and the pandemic, Languish are back with a new album, Feeding the Flames of Annihilation, out now via Prosthetic Records. As the metal scene picks up the pieces from two years off of touring, the new music that is being made is even heavier, more aggressive, and more full of pain than anything previously released. We took some time to chat with Languish drummer Zack Hansen about the new record and the impetus behind it.

Can we talk a little bit about this new record and what you were trying to convey? I know heavier music often has dark themes; that’s nothing new, but I read specifically that there are a lot of anti-capitalist themes on this record. Can you expand more on that?

We’ve always had pretty dark themes for our records, but we kind of wanted to consciously push this one a little further. I personally think a lot of death metal tends to be — I don’t want to say cartoonish, but you know, themes of dismemberment and death and zombies — There’s a lot of shit like that that just doesn’t feel real to me, doesn’t feel like it has something to say. I wanted to write about things that people can relate to, things that we all struggle with, and I think that our theme is generally just the frustration that a lot of people in the world feel with capitalism and the state of our lives in general, the state of the world.

What was the writing and recording process for this record?

It did take a long time; the last album came out at the end of 2018, and then in 2019, we were promoting that record. We finally sat down at the end of 2019 and were like, OK, let’s sit down and write a new record. We were working on some stuff, and then 2020 happened and COVID hit; everyone kind of went into their own isolation. I know in America, we didn’t really shut down but we were pretty cautious.

Our guitar player, Matt (Mutterpurl), his wife is a nurse, so we had to be extra careful. When you have to take those precautions, it’s hard to get together, and everyone is a bit thrown off. I work for myself, so I was really disconnected and just in isolation working by myself and being alone. I think mentally, we were all suffering.

When we finally got back together to record, we realized we had a lot of time on our hands because we knew the record wasn’t going to come out anytime soon. We were able to sit and really refine each, individual song and look at them objectively and think, is this part critical to the overall record? If it wasn’t, we were able to go home, listen to the demos, and rewrite it, and we did that for quite a while because the pandemic was never-ending, and we knew there were no opportunities to tour or play.

Thankfully, our label was great, and they were able to find a pressing plant for vinyl that could do a nine-month turnaround instead of a year, but we’ve been sitting on a finished record for well over a year, just waiting for it to come out.

It sounds like the state of the world influenced this album both in the lyrical themes and in the actual writing.

Absolutely, just being depressed and seeing what’s going on in the world and not having anything to do at the same time had a lot to do with it.

How about in terms of sound? I know your sound is pretty straightforward, grindy, and aggressive anyway, but do you think that was amped up by everything going on?

I think our sound is mostly influenced by what our guitar player, Matt, is channeling a lot of, and he was listening to a lot of old-school death metal and early-’90’s grindcore, a lot of Napalm Death, Internal Rot, Nausea, just a lot of older music. I think he was able to just be bathed in history, you know?

Do you all have any tour plans so far?

It’s hard because our guitar player is finishing up a graduate program to become an ear, nose, and throat doctor. So he’s in a program called an externship where he’s basically working at an office so he can get a job when he finishes the program. So then he’ll be Dr. Matthew Mutterpurl, and hopefully he can fix my hearing in 15 years when I need it (laughs).

In the meantime, we’re just trying to do all we can to push the music online, and maybe next summer we can tour once he misses his program. We want to focus on making great music and hopefully get out there as much as we can.

Is there anything else you want to include, anything you want people to take away from this record?

We really want people to hear our message. A lot of this record is political, and a lot of it is angry. We shared lyric writing duties and wrote a few songs about them in the studio, just brainstorming and refining lyrics because we wanted to present a clear and concise message, that we should all be helping each other a bit more.

Languish’s Feeding the Flames of Annihilation will release on came out on October 7. You can get your hands on a copy via Prosthetic Records today.