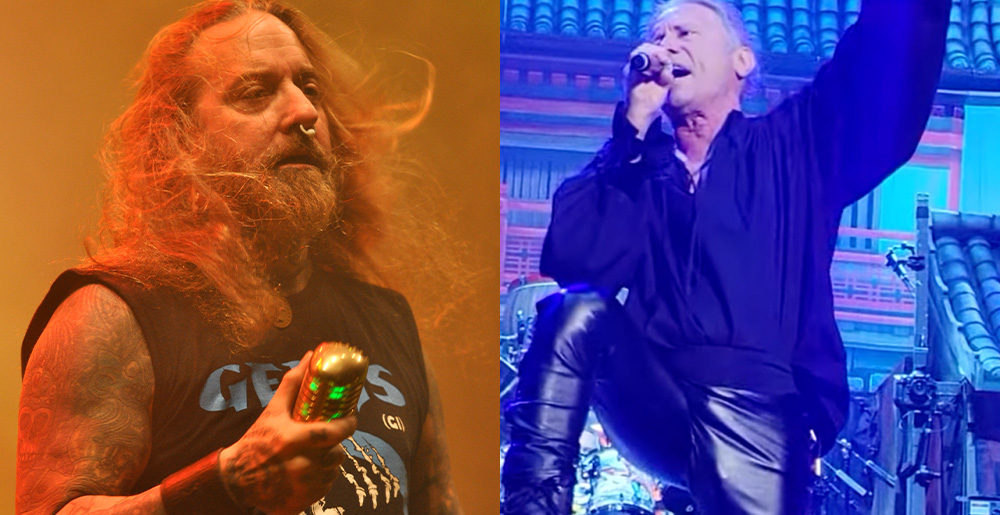 I’m willing to bet that when Iron Maiden frontman Bruce Dickinson complained about someone smoking weed in a California venue, he didn’t expect there’d be as much of a response as there’s been in the metal community. From concert goers to fellow performers, people have generally taken the “what’s crawled up your ass” stance. One such person is Devildriver’s Dez Fafara, who recently took to social media to respond to the legendary vocalist.

In a series of tweets earlier this week, Fafara shared an article about the incident before adding his commentary to the mix by simply saying “It’s a concert bro people smoke weed.”

Then yesterday, Fafara returned to get a little more in-depth with his thoughts on the matter, explaining that performers don’t necessarily own the stage they perform on. We’ve taken the liberty of editing his tweet for clarity.

“When he’s in that concert hall, he thinks it’s his but it’s not – it’s the people’s those who bought tickets house, not the band’s house. I’ve had this argument for years with bands; ‘bro you’re in their town, in their house. You’re just a fucking guest. #smokeweed”

For those that don’t remember, all of this smoke is coming from a situation where Dickinson called fans out and asked for “a tiny bit of respect,” requesting that people go outside to smoke.

“I don’t know what it is. There’s so many fucking people smoking so much fucking dope down here, I’m amazed you can even see. Poor old Steve [Harris, Iron Maiden bassist]. I don’t know if you know, but he absolutely fucking hates marijuana and the smell of it, alright? So when he’s trying to play bass, it fucks him up. It fucks me up. I’m a singer, alright? So duh. I would just ask for a tiny bit of respect – if you want to go get completely stoned out of your fucking mind, go out the back and do it. Alright? Otherwise you’re going to end up like this fucking knucklehead here going ‘uhhhh.’”

As a cannabis lover myself who’s sung in front of crowds before and has been to an Iron Maiden show, there are two points I’d like to make. First, unless three rows full of people are smoking joints like chain smoking cartoon characters, Bruce isn’t inhaling that second-hand ganja, so it’s very unlikely it’s going to fuck up his lungs or his singing. Secondly, those people in the front paid crazy amounts of money to be that close. If they leave, they’ll lose their spot so yeah – that’s not gonna happen. And finally, there’s usually like 15 feet between the front barrier and the stage at an Iron Maiden show, so there’s plenty of air that may smell a bit, but won’t negatively affect the performance.

So relax, Bruce. Maybe go get you a vape, some flower, and just… chill the fuck out.

Metal Sucks Greatest Hits
1230 -
Loutallica’s LuLu: The MetalSucks Reviews
350 -
MetalSucks Exclusive: Jeff Loomis’ First Interview Since Leaving Nevermore
0 -
For $16,000, Ted Nugent Will Stay the F*ck Away From Your Town
0 -
Has Moshing Turned Into a Form of Bullying?
0 -
Video: Killswitch Engage’s Adam Dutkiewicz Wins Everything on The Price is Right
0 -
Why I’ve Stopped Buying Vinyl