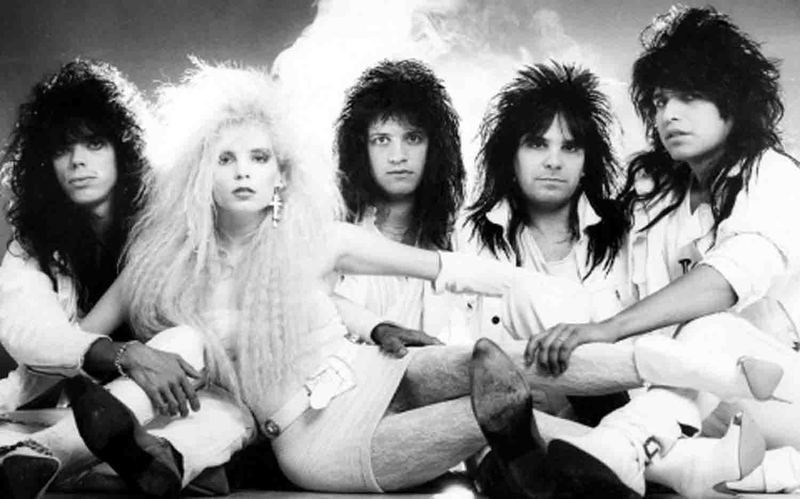 Heavy metal vixen turned indie music mag publisher Sally Steele was treated as an afterthought in an era where she should have been relishing the spoils of her musical exploits.

After cutting her teeth amongst a humble mid-west club scene, Steele took to the sleazy streets of the Sunset Strip to forge a career in hard rock music. But a bustling scene jam-packed with self-lionizing would-be heroes fostering delusions of grandeur proved steep competition for the blonde bombshell.

Though initially discarded by fans and critics alike, cast aside, and relegated to roles in seedy TV shows, Steele remained laser-focused on making her dreams a reality. All that came to fruition with the recording of “Too Bad (It Had to be You)” and “Leave My Heart Alone,” two late-stage hair metal classics that were triumphant in sound but unfairly buried amongst a scene dominated by machismo and sexism.

As the decade came to a whimpering close, the ‘90s were to be defined by alternative stylings, and though Steele tried to keep her dream alive, ultimately, she, like many others, was silenced. And though her dream seemed a shadow in the distance, Steele was ever resolute.

With her long-lost album in the can and collecting dust, Steele pivoted, forming Vegas Rocks Magazine, with an explicit intent to aid small-time artists garner the exposure they so direly need to help prevent a fate like hers. Still, her dream of finally releasing her music to the masses remained, but with no outlet, her musical voice remained silent.

All that changed when Cleopatra Record’s Brian Perera caught wind of Steele’s long-lost recordings. Enamored, Perera sought to give the recordings a wide release, and soon, the full record, along with remastered renditions of “Too Bad (It Had to Be You)” and “Leave My Heart Alone,” will be thrust into the ether, finally given a chance to breathe.

With renewed vigor, and a second lease on her musical life, Steel recently joined me for a chat, dialing back the clock to the ‘80s to recount her years on the Strip, her trials wading through a biased scene, the unearthing of her music, and a whole lot more.

What sort of scenes were you exposed to growing up? How did that lead to you working on videos for Bruce Willis and Loverboy?

The scene I grew up in was pretty much reclusive. I didn’t have any friends and just listened to records in my room and dreamed about being famous one day. I worked every day when I lived in Hollywood during the ’80s trying to land roles on television and movies. The Bruce Willis and Loverboy videos were just two of the many videos I went down and auditioned for where they liked my looks. I played a hooker a lot in many films, and that is what I played at the beginning of the Loverboy video “Lovin’ Every Minute of it.” But the biggest video I did where I had the lead was “Little Lady” By Duke Jupiter.

Were you comfortable with that level of exposure? What led to the shift toward making music?

Yeah, I was pretty comfortable with all the movie TV roles. Like I said, I was always cast as a vixen, hooker, bar patron, or punk rocker but mostly a hooker. I had the clothes, what can I say? [Laughs]. I was singing the entire time from about age 16 in bands. I never stopped. I just got distracted when I was in Hollywood trying to be a movie star. Eventually, I decided to put my full focus on that once I had a foot in the door. I will tell you that one thing I did struggle with was people taking me seriously as a musician. I was blonde, so people assumed I was a joke and an airhead for the most part.

Can you recount some of your earliest gigs?

Well, since I was making music, or trying to, before I got involved in TV, my first shows are earlier than a lot of people might realize. As I recall, my first show was in Shelbyville, Indiana, at a park in a band called Medusa. I think I was 16. I put up flyers on posts all over town, and to my surprise, people actually showed up.

Walk me through the inception and recording of “Too Bad (It Had to Be You)” and “Leave My Heart Alone.”

I recorded both songs in someone’s bedroom. Then producer Paul Sabu wanted to recut them the way he wanted, and they came out even better. As I recall, “Too Bad (It Had to Be You)” was written about Eric Carmen when I heard he was in town and didn’t call me. This was after I was in his video “Hungry Eyes.” I can’t remember who I wrote “Leave my Heart Alone” for.

Can you recall filming the video for “Leave My Heart Alone?”

The first video for “Leave My Heart Alone” was filmed by students from a university. We argued the entire time about how it should be done, but I was in love with my boyfriend – the guitar player – at the time, so he had a way of calming me down. Tracy Ferrie was the bass player who later played in Stryper and is now touring with Boston.

Did the video alter the public perception at all?

The ’80s had such a saturation of musicians that I don’t think people paid a lot of attention to me. Then the band broke up, and the momentum was lost until I picked up the pieces with new band members much later.

What are your lasting memories of the Sunset Strip?

Back then, it was no big deal to see the biggest stars all over the place with no security. I actually became jaded and thought I was going to be famous just like them, so I didn’t have to pay attention to them, which was crazy. Jack Nicolson was right next to me by himself in front of the Whisky standing beside me, and I didn’t even flinch. That was a trip. [Laughs]. The scene on the Sunset Strip was good up until about 1987 when the wealthy residents banned all the kids from passing out flyers for littering. I soldiered on, but it was all over, with Nirvana ruling the rock scene by 1992.

Did you consider giving it a go in the ’90s or changing your sound to fit the times?

I had a baby in 1992 and moved to Nashville to do crossover rock country songs, and I did a CD. But it was the most depressing time of my life; everyone treated me like I didn’t belong and I felt so lost. I got stuck there, and people told me to go on back to where I came from. They said I was weird and I was a liar for saying I knew famous people in L.A. from when I lived there. So, it was not my favorite time in my life or for my music.

Tell us about the long-awaited release of your record. What makes how the right time, and what made this possible?

I met Brian Perera from Cleopatra Records to try and get them to release my film. They referred me to someone else. I never told him I was a singer, but he stumbled on one of my ’80s videos on YouTube and said, “When I heard it, I thought to myself, ‘This music Is a lost treasure; it needs to be heard.’”   So, I give Brian all the credit. I guess people appreciate ’80s music more now.

Does this feel like redemption or a second chance for you?

Yes definitely. I am very happy that my music I sacrificed everything for is finally being heard. I never thought this would happen. And it’s funny because Cleopatra Records remastered them, but they actually sound the same to me. I was never given a shot at all. I was late because I was trying to keep irrational, crazy musicians together in a band, so my momentum was lost, and it took forever to get the right members… again and again and again.

Do you have any regrets?

Many, but not too much with my music. Just not getting my photo with Paul McCartney when I had the chance, and not going to the convention center early when Elvis was in town in Indiana. [Laughs]. I saw him in Bloomington, but I always got to meet people at the convention center when I showed up early, but I didn’t bother because I saw him the week before in concert in Bloomington.

Take me through the formation of Vegas Rocks Magazine.

My boyfriend, who was a maintenance man at the time, said he was going to do a local rock magazine. He left me at the altar, so I decided to start my own. I basically didn’t know a thing about doing a magazine, but neither did he, so I figured, “What the Hell?!?” [Laughs]. I was never given a chance for my music, so I was very willing to help other local and struggling artists when I started my magazine. Thank you for listening and for reading!

Things are looking good! My movie Raised on Rock: The Burnette Family Legacy was just signed for distribution and will be released soon. I have a great boyfriend and a record deal, so things are really great right now!