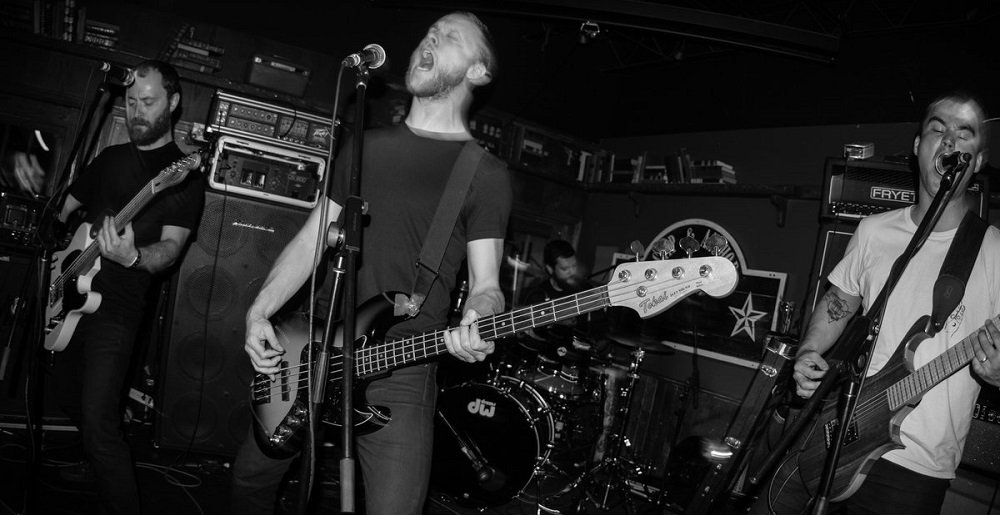 20 Doom and Sludge Bands from Canada

As a spiritual continuation to the 25 Stoner Bands of Canada list released last month, we now step out of the dope-scented haze and delve into the sludge and doom bands of Canada. The slowness and heaviness stay intact, though now with a more misanthropic point of view. Sludge and doom are sounds that have been mastered in Canada – chiselled out of ice to make sculptures you’d probably see at the Mountains of Madness.

The recent Doomed & Stoned in Canada compilations host more than 70 tracks from bands within Canada playing slow and heavy music. It would be a stretch to cover every band represented in the compilations in a simple listicle such as this, though it is a great resource if wanting to go deeper into the Canadian doom, sludge, drone and stoner scene.

So, take a minute, slow down. Tie up your winter boots and put on your toque – we’re going to be trudging through some foot-high snowbanks to get to the dingy basement venues hosting these bands – where only the heat from the Orange Amps will be your furnace. Better stop by Tim Hortons for a double-double first, though.

Calgary’s The Weir encourages listeners to “slow down.” That, they do, but we all know slow and steady wins the race – the band composes songs that build like magma rising to the tip of a volcano. Just when you think it can’t get heavier, they unload a triple-roar from prehistoric times that makes you think The Weir and Primitive Man should swap names. Check out their split with Adolyne, Dummies, in which both bands cover Portishead songs.

Although Mares of Thrace is made up of only two people – band visionary/guitarist Thérèse Lanz, and drummer Casey Rogers, the band sounds like there are at least five people on stage. Chalk it up to the experience and synergy of the duo – a well-oiled machine would likely trail behind Mares. While they’d been inactive for a number of years, their triumphant return with The Exile shows that they haven’t missed a beat, showcasing this symbiotic relationship with six songs that progress onward, ever onward, into doom crescendos.

The Juno Award (Canada’s equivalent to the Grammy Awards) nominated Vile Creature compose slow, sludgy doom tracks which are given a swampy makeover with layers of agonized paired vocals. Backing tracks provide chilling Italian horror-esque atmosphere which allows for the sludge to come back with a vengeance during the progression of their songs. For VHS collectors, Vile Creature released their own – Glory, Glory! Apathy Took Helm! Just place it next to your Videodrome tape.

The experimental sludge/industrial/doom pioneers Zaraza took their name from the Polish, Serbian and Ukranian word for plague. Starting in Montreal in 1993, the band then broke up in 2006, reformed in 2015 in Ecuador, moved to the US in 2018 and is now currently a band on both sides of the border, with the two members living in Houston and the place where it all started, Montreal. From Life is Death Postponed to Spasms of Rebirth, the industrial noise/doom metal of Zaraza has been witnessed live just a couple of times, once opening for Knurl and Merzbow. Those fortunate enough to have seen their live show won’t soon forget the symptoms of the plague.

From the nation’s capital of Ottawa, the four eternal sons who make up Loviator have been pounding it out since 2010, making their mark in their homeland with EPs like Widow’s Flame and Druid’s Curse. Prosthetic Records (1349, Beneath the Massacre) has handled their two full-length releases, 2017’s Loviator and 2020’s Lightless – two albums that have built upon their independent EPs and have finally let the world at large experience world class doom from the Great White North.

The creature lives! Montreal’s Lochness blow some green smoke onto the doom genre to make it awaken much like Eric Andre does to the artifact in Panos Cosmatos’ The Viewing. The band takes inspiration from their love and their fear of the unknown horrors of the deep sea, with songs like “Black Smokers” Engulfing the listener in pressure as if they were 20,000 feet under the surface. Call up Ahab and light up some “Sea Weed,” it’s going to be a harrowing journey.

St. John’s, Newfoundland is probably one of the first places in Canada you’d think a sea hag would live. Well, set loose from the lobster traps in the murky depths of the Atlantic, HÄG is a five-piece doom rock group with a progressive flair. Their song “Funeral” was featured on the second edition of Doomed & Stoned in Canada, introducing the band to listeners who couldn’t make the trip to the Maritimes for a show.

Montreal’s The Great Sabatini are indeed one of those elder bands whom command respect and any band that goes out on tour with them instantly go up a few rungs in street cred. The band fancies themselves as progressive sludge metal, and a live show by them certainly does feel a step beyond your run of the mill band. Goodbye Audio is their latest offering – how much more progressive can you get than with that title? Their hard work granted them a slot on the Heavy Montreal festival in 2019, which was kind of a major deal.

This Montreal-based three piece combines doom, sludge and black metal for a musical journey through the bleak vastness of the cosmos where you’re more likely to survive losing your flesh and implanting your spirit into a small robot. The band recently had an outing with Canadian noise rock legends KEN mode and previously played with Primitive Man – competing with them for who could implode the venue first with their volume. Long live the new Flesh/Void.

Heavy soundscapes going into uncharted territory – how many times have you heard that description for a doom band before? Well, during the first few minutes of the intro track “224.7” off of their album The Sapient, I didn’t know where I was or what I was listening to – so it really must have been uncharted territory. The Vancouver-based band does get back to basics, though, with drawn-out, fuzzed-out vibes that bring you right back into the couch from uncharted territory so you can melt into it.

The nice thing about Vancouver’s Seer is that they released their albums with chronological titles, so it’s hard to get confused about what era of the band you are listening to, much like a sludge/doom Led Zeppelin. The band does get excruciatingly heavy, though their clean vocal moments bring Mastodon to mind. Their stylish videos were all done by the same individual, Lucien Cyr, who has an eye for the esoteric covered in black and white.

Toronto’s Völur borrow their name and lyrical aesthetic from Norse mythology. That might not be so unique in the metal world – what is though, is that instead of guitar, their brand of doom metal includes instead, a violin. This three-piece has been a force since 2014, breaking through internationally in 2017 with their Ancestors release. Doom, jazz and a Scandinavian aesthetic. Follow the psychopomp known as Völur to Valhalla.

Not to be confused with the symphonic metal band called Empress who will surely come up if you search the name, Vancouver’s Empress is a post metal/doom/sludge beast featuring Seer’s Peter Sacco teaming up with drummer Chris Doyle. Sadly, their bassist Brenden Gunn passed away two years ago, so the band is currently just a badass duo at the moment. This empress is akin to a chimera, with songs showing their different faces as they progress – each revealing a different side of the band, each being majestic and powerful.

Grales haven’t been out for a long time, emerging in 2019 with their demo – but with the release of 2022’s sludge-a-thon Remember the Earth but Never Come Back, have quickly made a name for themselves for causing a musical crater in their native Montreal. Churning riffs, plague-ridden vocals and a misanthropic outlook. As Crazy Ralph would say in Friday the 13th, “You’re all doomed.”

Toronto’s Itus are another recent band taking the sound of doom and sludge to a place much earlier than old school – back to a time when the nights were lit only by fire and music was made up of screams from the pain of existence. Itus lend their track “Primordial” to Doomed & Stoned in Canada (Vol. II), with the music video being a bleak horror story set mostly in the Canadian outdoors.

Hamilton’s Astral Witch have collected the ancient runes and placed them together to activate a musical manifestation of cursed doom. Two EPs, one full-length and several compilation appearances are Astral Witch’s tarot cards dealt into the hands of Canadian volume dealers. Check out their “Rune” video with clips from Mario Bava’s Black Sunday while heating up your cauldron.

Formerly known as Corvuss, Toronto’s Olde focus on the power of the riff, putting all of their effort into making them as crushing as possible. Released via Sludgelord Records (UK), their Pilgrimage record proves that a new king has crawled out of the wastelands. Check out their contribution to the Melvins tribute album A Future of Bad Men, “Hooch,” which when put through the Olde filter, sounds as if it was one of their originals.

Borrowing elements from black and death metal, Toronto’s Ischemic then create a swirling, bubbling abyss of dissonant sludge that is their gift to the music world. In a subterranean dungeon where demons spend their free time torturing men of the flesh is where you might hear Ischemic blasting on the PA system.

Listening to all of these doom and sludge bands, you must be a little sick of hearing heavy guitars over and over again. Well, good news – take a neck-break with Seum, who have tossed their guitars into the void and brought the bass back as the instrument to worship. Take a stroll through a Montreal cemetery with the trio and listen to “Red Sematary,” a track that pulls apart the Ramones classic like it was on the rack.

Adding a pinch of grind to their plate of sludge, the two-piece Cambridge, Ontario-based Greber don’t play around with self-indulgent song lengths. Instead, they are direct in their fury, bringing to mind bands like Unsane or EyeHateGod if they were on ffwd. Fortunately, memorable riffs are not collateral damage with the speed of Greber. When visiting Cambridge, make sure you try this “Hometown Heroin.”

There is probably one Canadian cannabis related band for every cannabis store found in Canada.

Metal Sucks Greatest Hits
0 -
Video: Vocalist Performs Ten Styles of Metal, Complete with Appropriately Silly Lyrics
0 -
Why There Will Never Be Another Metal Band as Big as Metallica
0 -
Rigged: Luke Hoskin of Protest The Hero
0 -
For $16,000, Ted Nugent Will Stay the F*ck Away From Your Town
0 -
Rigged: Luc Lemay of Gorguts
0 -
Give a Heavy Metal Valentine’s Day Card to Someone You Love