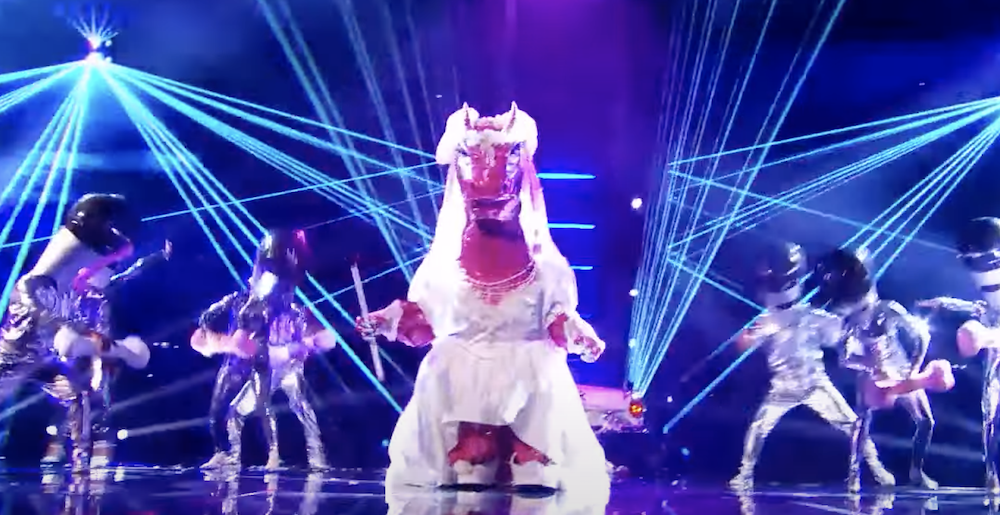 Is it cheating for a professional rockstar to be on The Masked Singer? Fozzy frontman Chris Jericho was revealed on Wednesday night to be the singer behind The Bride, a giant pink dinosaur dressed as a bride, on the popular FOX television show that pits costumed, singing celebrities against each other.

The judges/investigators for the show—Ken Jeong, Jenny McCarthy, Nicole Scherzinger and Robin Thicke, plus host Nick Cannon—all failed to properly guess Jericho’s identity. In addition to his voice, the audience was given this clue about the Bride character:

“Dearly beloved, we gather here tonight for Hall Of Fame Night, but I vow to rock. I’m always telling feel-good stories, but let me explain how I ended up here, alone, at this junkyard wedding. I have a rugged personality, I live on the road selling out arenas and I have an appetite for destroying things. So I’m notorious for being in some of the messiest feuds. I’ve gone the solo route, and I’ve come here to master. Master a new commitment with all you Masked Singer freaks. So tonight, here comes the bride!”

Jericho performed Billy Idol‘s “White Wedding,” Smash Mouth’s “All Star” and Walk the Moon’s “Shut Up and Dance” during his time on the show. TV Insider spoke to him about how he got involved with the show in the first place:

“Over the last few years, I’ve kind of been connected with the show. I know a couple times, the judges guessed that it was me a few seasons ago. I know Jenny [McCarthy Wahlberg] did, maybe last year. And the producers, as a result, asked me to do a couple tweets for the show — ‘you never know who it might be’ type of thing — so I kind of was already in the Masked Singer universe, if you will.

“So when I finally got the opportunity to get asked, it was kind of a no-brainer. Because, at first, I thought the show was ridiculous. Who would ever watch it? It’s so stupid. This is dumb. And then I realized there’s a real charm to it and it looks like it’d be a lot of fun. So when I finally got the call, I was like, there’s no reason not to do it; now that I understand what the show is, let’s go have some fun with it.”

Check out a few videos of Jericho’s performances and his exit interview below.

Metal Sucks Greatest Hits
0 -
Thirty of the Worst Metal Band Promo Photos of All Time
0 -
BREAKING: Ex-Suffokate Vocalist Ricky Hoover Successfully Undergoes Earlobe Reconstructive Surgery
0 -
So As it Turns Out, Banging Your Head a Bunch Can Be Bad for Your Brain
0 -
Converse Rubber Tracks x MetalSucks: Everything All in One Place
1210 -
MetalSucks Exclusive: Behemoth Frontman Nergal’s First Interview Since Being Diagnosed with Leukemia
0 -
Rigged: Wintersun