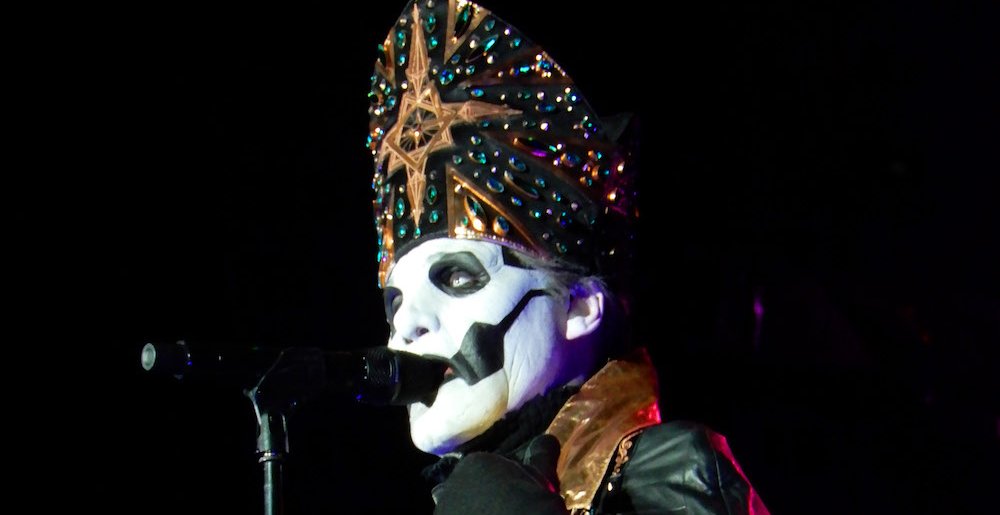 Forge at Hellfest 2022, photo by Tilly Antoine via Wikimedia Commons

Tobias Forge on Love for Death Metal: “That’s Very Much Where My Adolescent Heart Is”

In a new interview with Loudwire, Ghost frontman Tobias Forge—who once fronted death metal act Repugnant—was asked if he thought that Ghost would ever record a death metal song. To no one’s actual surprise, Forge said that it was unlikely to happen because Ghost is a bad that sounds like, well, Ghost.

“No, I don’t think so. I believe that it would be… Because I’ve tried to build this world where there were no obvious rules, still there’s a certain… It’s kind of like making a timepiece film where if it’s about Vikings, you can’t wear a Casio digital watch. And I think there are elements in music that just might become that sort of digital watch or a ‘Transformer’ toy that just comes in and just screws up the picture in a way that… I would rather entertain writing death metal with everything that comes with that… If death metal is this bubble here, GHOST can be this, and maybe there’s this little passage where they can sort of meet, where there are elements from that that leak through. But playing a straight death metal beat would just feel strange, I think, in that setting.”

The interviewer then asked Forge if he still enjoys death metal and has any desire to pursue it, to which the former Papa Emeritus says yes.

“All the time. I love that stuff. I listen to it a lot. I’m still obsessing over it from a collecting point of view. That’s very much where my adolescent heart is. I grew up with a lot of music, but my adolescence was completely immersed and completely swamped with that impression.

“I still get the same kick out of things that I liked as a — not even a teenager; as an 11-year-, 12-year-old, when I really started listening to that and when death metal was this really dangerous animal that you can just go to this one store to find,” he continued. “And I’m still sort of chasing that.

“I have my safe spot inside where all that is, and, of course, it’s materialized in a lot of physical things that I’m collecting. But I still feel that sort of urge to, in some way or form, partake in it. But I don’t know in what form it will materialize.

“I think that there’s another conflict… Since I never really did it professionally… Or let’s be real — I never did it professionally; it was very unprofessional in every way. That is not exactly what I wanna do. I don’t wanna have sort of messed up rehearsals where we end up drinking instead and you end up coming to a show with a plastic bag and a broken pedal and you have to borrow cords from other bands and then you end up playing a really drunk show in front of 20 friends. Which is fun as fuck, but as a grown-up… It’s kind of like in ‘Comfortably Numb’ where he sings, ‘That child is gone. I can’t feel that way.’ I can’t paraphrase what he’s singing in that, but he says it in such a great way where you know it’s there, but it will never feel the same. You can never be revirginized [laughs] for real. But I live on hope. So I think that there will be a time for that rockage too. But it will not necessarily be the way it was.”

If Forge starts a new death metal band, we’ll be the first to tell you. Until then, put your eyeballs on this video of Repugnant playing in 2010.

Metal Sucks Greatest Hits
0 -
A Detailed Analysis of Slipknot’s New Masks
0 -
Worst Year Ever: All of Our 2012 Year-End Sh*t in One Place
2860 -
What is the Best Christian Metal/Hardcore Band???? [you’re moshing 4 Christ]
0 -
12 Embarrassing Albums That Everyone Owned Back In The Day
0 -
Exclusive Interview: Damien Echols of The West Memphis Three on His Life After Death
0 -
What in the Mother of F*CK Did I Just Watch???