When Kayo Dot reunited for a one-time-only performance of its 2003 full-length Choirs of The Eye at The Stone a few Wednesdays ago, the line began forming at noon. People came from Toronto, Italy, Norway. So many people showed up that Kayo Dot played THREE sets back-to-back-to-back. True, The Stone is a 65-capacity venue, but that turnout alone should speak to just how significant the album is to how many individuals. I meant to save this space to snark about some trend or other, but I’m taking the time to talk about Kayo Dot here instead because the record, and the band, deserve it. If you’re not familiar with Kayo Dot, here’s a brief intro: as Boston experimental metal band maudlin of the Well began to move further towards progressive, extended structures and away from chaotic, mathy riffs, mainman Toby Driver also began to grow dissatisfied with the band’s status as a metal band. Both because of metal’s tendency for repetition and because of the many that pigeonholed maudlin as a metal band, the multi-instrumentalist Driver (who trained under Yusef Lateef at Hampshire College) sought to create a through-composed, riffless, and thoroughly less “metal” entity. And so, after maudlin of the Well had written what had initially been its fourth full-length, lost half its members, and switched labels, it only made sense to change the name and begin a new project. Kayo Dot preserved many of motW’s sonic and structural idiosyncrasies, but reworked those idiosyncrasies to make them specific to the new direction. In 2003, the remarketed and reshaped act released Choirs of the Eye, an hour’s worth of music that seems to present an opportunity for decades’ worth of analysis, contemplation, and discussion. Choirs of the Eye is the kind of magnum opus that upheaves genre and canon, one of modern metal’s (dare I say modern music’s?) Rite of Springs or Girl with Mandolins, and Kayo Dot – a band that hides puzzles in its albums and incorporates sounds like the click of a Polaroid camera in lieu of lyrics that don’t sonically fit – is the perfect vessel for this music. In typical Kayo Dot fashion, every one of the band’s works sounds wildly different from its predecessor, but Choirs of the Eye is my first love, and the best place to start: an album that is haunting, personal, and inarguably important. 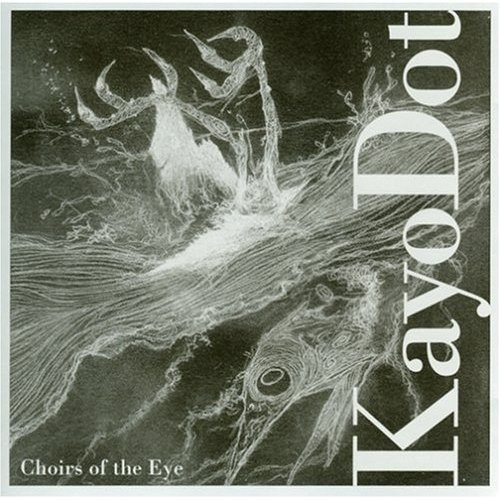 It isn’t a stretch to say that Choirs of the Eye is one of the most impressive works of music of the last twenty years, if not longer. Classifying it has proven totally futile – this is one of those works that’s so utterly removed from everything else that it just gets lumped into the avant-garde category for the sake of convenience. Like many experimental works, Choirs of the Eye is through-composed, and features more instruments than are worth listing. Unlike many experimental works, Choirs of the Eye uses those compositional and instrumental elements as an attempt to bring metal elements into a modern classical framework (rather than the other way around, which has been abundantly attempted in metal music). Circus metal this is not; Kayo Dot knows that it takes more than a few frantic violins to impart any significant classical influence on a work, as John Zorn’s recognition of the band speaks well to.

Though the album might include passages of doomy chaos and straight-up black metal, structurally, Choirs of the Eye has little in common with those or any forms of metal. Choirs sprints, ambles, drones and plods; it never really repeats, but it also doesn’t get tangled up in excess and theatrics the way that a lot of through-composed metal does. Though some individual sections might sound accessible in a vacuum, the larger package is not so. You simply can’t look at any section in a vacuum and expect it to make any sense out of context, but it’s no small challenge to focus on and consider the entirety of each track here. It says a lot that the nearly 15-minute-long “The Manifold Curiosity,” with its gradual but steady surge from serenity to tension into blast beats and thundering dissonant chords, is one of the most digestible tracks on the record.

Even though Choirs of the Eye gives each passage and instrument plenty of space and time, it doesn’t mean that any of it is predictable or drawn-out, or even that any of it is gratifying. When it’s metallic, it’s dissonant and jarring; when it’s mellow, it oscillates between blissful and disquieting; the sections that are neither cover all the ground in between. Passages and instruments crescendo into existence without warning, like at the end of “A Pitcher of Summer” or the disconcerting intro of “Marathon.” Each voice feels spontaneous, yet necessary, from the incredibly subtle horn squawking over that aforementioned Polaroid and a blast beat around the 8:48 mark in “The Antique” or the natural harmonics (not too unlike the Gorguts track “An Ocean of Wisdom”) that add brightness and anxiety to delicate and tremulous passages.

In an interview conducted around the time of the albums’ release, Toby Driver said that “you shouldn’t really think about [the album] too much.” On one hand, that makes sense. Choirs is visceral, and rarely overcomplicated; for all the instruments on the album, each one gets its moment in the sun, and the whole thing flows with an open, intuitive atmosphere. But on the other hand, that statement is totally mind-boggling. Choirs of the Eye is elusive, resistant; every attempt to isolate and comprehend it results in more questions. And that’s just the music. The lyrics (though not published) are just as poetic and thought-provoking, delicate and mysterious in their imagery and abstraction. maudlin of the Well was primarily inspired by lucid dreams and astral projection, and while Choirs of the Eye wasn’t written explicitly along those lines, you’d be hard-pressed to deny the dreamlike vibe of the album (I’ve always considered it a spiritual companion to Ulver’s surreal Perdition City, albeit a less modernized one). Choirs is removed from normal reality, that’s for sure; the album swings back and forth between seemingly incompatible soundscapes on a dime and doesn’t even seem to need to explain itself.

When you compare Choirs to an album like the one I discussed last time, it’s clear the two exist in different frames of mind entirely: both albums take time to digest, but once you listen to Nespithe for long enough, it clicks, and you’re able to reexamine the entire thing in that new light. But you can still ultimately figure it out. Even after I’ve gotten to know the sound of Choirs of the Eye, its unparalleled use of contrast and poignant atmosphere (metal and otherwise) change the way it makes me feel, and the way I relate to it, every time I listen to it. Choirs makes me want to simultaneously wallow in nostalgia and coldly disregard the past; it makes me wax philosophical about the interconnectedness of life yet also renders me brutally aware of the futility and insignificance of my own existence. And that’s just what it means to me – Choirs is such a diverse, unhinged album that I am sure it means different things to you and to everyone else. Plenty of bands do weird well, but few can do weird this tastefully. As Toby Driver put it – “it’s really very human.” Choirs of the Eye might not be for everyone, but really, it is.

You can stream and purchase Choirs of the Eye via Kayo Dot’s Bandcamp HERE.

Foul Alchemy welcomes reader feedback. Please send all suggestions, hidden messages, and secret correspondences to news AT metalsucks DOT net with FOUL ALCHEMY in the subject line or drop them in the comments section below.

Your guide to this week’s most brutal new releases, including Vitriol, Krallice, Mizmor, and much miz-more!

New Stuff 0
Vaura’s “The Ruins (Hymne)” is a Haunting Journey Into Post-Rock from Members of Gorguts, Tombs, Kayo Dot and Azar Swan
February 20th, 2019 at 10:26am Vince Neilstein

Nothing like Gorguts or Tombs. Still very, very good.

We discuss the late, great Alexi Laiho, Bodom After Midnight's…

Metal Sucks Greatest Hits
0 -
I Am The Working Class: The MetalSucks Interview with Fenriz
1860 -
The Top 25 Modern Metal Guitarists: The Entire List in One Place
0 -
Advanced Discrimination & Dragons: A Critical Look at Varg Vikernes’ Myfarog RPG
540 -
Worst Year Ever: All of Our 2010 Year-End Sh*t in One Place
1480 -
Being in a Band is for Losers [Scientific Proof]
0 -
The Single Greatest Analysis of Nickelback’s Work Ever Written