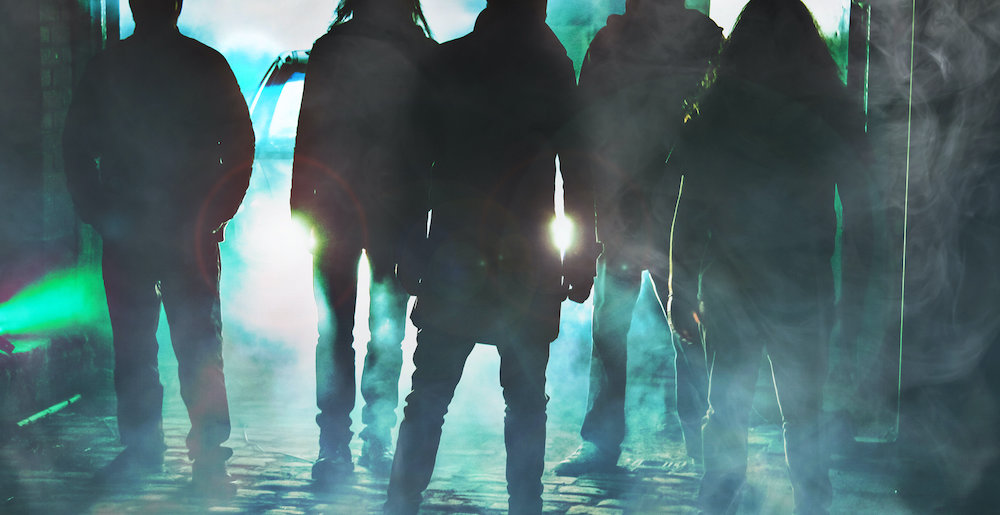 In the late ’80s and early ’90s, back when people still rented VHS tapes from video stores, your MetalSucks co-chiefs would scour the aisles of the horror section, making rental choices based on which movies had the most provocative, sure-to-upset-our-parents cover art (funny enough, that same strategy led us to a lot of our favorite metal bands). The dirtier and more dangerous the movie looked… the more likely it was that the clerk might give us a hard time about renting such a film without an adult guardian present… the more we felt we had to make sure our folks never found out that we had gotten ahold of the flick… the more we wanted to see it. Immature? Of course — we were literally kids. But it’s hard not to think back on that time as one of the most exciting of our lives. Shit, we did end up starting a metal blog, after all.

Few bands can whisk us back to the way we felt in those days the way England’s Video Nasties do on their new album, Dominion. The album is 42 straight minutes of filthy, disgusting, and ebola-level infectious deathrash that has a Proustian ability to send us right back to the video store aisle, trying to figure out if we can rent The Mutilator by slipping it into the case for Bambi. The band — which is comprised of members The Bendal Interlude, SSS, Magpyes and Iron Witch — cites everyone from Carcass and Sepultura to The Cure and Dead Kennedys to The Master of Horror himself, John Carpenter, as influences, and we’ll be goddamned if they don’t do all of those storied acts proud.

And so it is with no small amount of pleasure that today MetalSucks premieres “Drone Eagle,” one of the gnarliest, smuttiest, most vile tracks on Dominion! Says bassist Rick Owen of the song:

“‘Drone Eagle’ is about Armageddon. We’re going to hell in a hand basket, baby and there’s nothing we can do to stop it. A demise driven by power, greed and corruption.”

Check out “Drone Eagle” below! Dominion comes out on Friday the 13th (naturally!) of March via APF records, and can be pre-ordered here (physical) or here (digital). The band also has two shows lined up in the coming weeks; you can get those dates below. More should be announced soon!

Metal Sucks Greatest Hits
0 -
Today in Dream Theater Shirts: Metalhead Veterinarian Fired for Bestial*ty
0 -
Editorial: Slayer Should Become Professional Songwriters
0 -
Op-Ed: Metal Vocalists Have Become Irrelevant
0 -
Anthrax’s Frank Bello is Really Excited to Be Here, Not at All Concerned About Swallowing Bugs
0 -
‘Til Death Do Us Part: Metal + Hard Rock Musicians’ Wedding Portraits
0 -
12 Embarrassing Albums That Everyone Owned Back In The Day