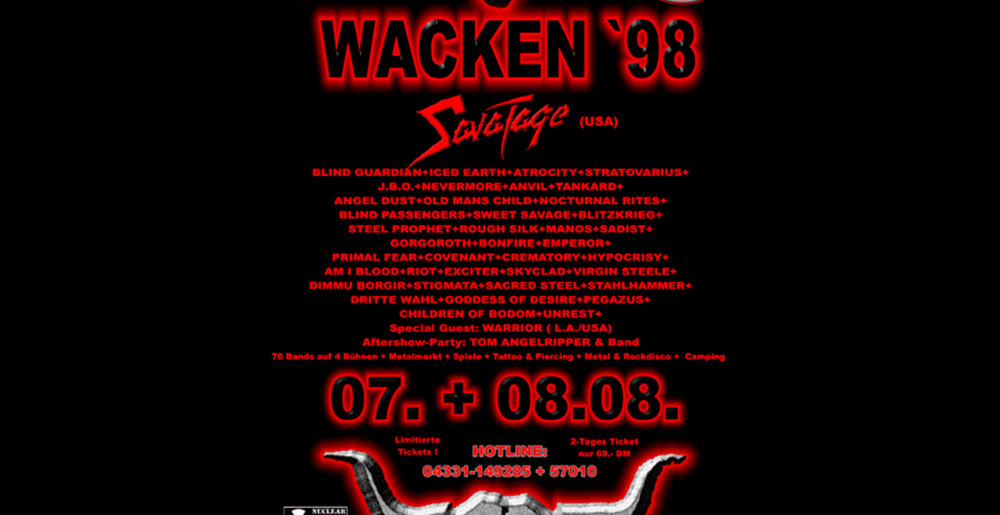 Classic Concert of the Day: Highlights from Wacken Open Air ’98

To help pass the time, we’ll be sharing a classic metal concert every day (and by “every day,” we mean “as it occurs to us”). Watch some of it, watch all of it, watch only one song… we don’t care! As it long as it provides you with a bit of entertainment.

For the first time in thirty years, there will not be a Wacken Open Air festival this summer. It’s a historic occurrence, in all the wrong ways. Wacken is one of the biggest, most respected metal festivals in history; even if you weren’t traveling to Germany for this year’s fest, the fact that it’s been called off hurts, and it hurts bad.

This being the case, today we thought we’d look at some highlights from the 1998 edition of the festival — which took place August 7 and 8 of that year — as captured for a VHS video released later that same year. While it unfortunately doesn’t include any complete sets, it does feature a ton of partial sets by some great bands, including Gorgoroth, Lacuna Coil, Children of Bodom, Iced Earth, Borknagar, Primal Fear, Tankard, Riot… the list goes on and on. We know it’s a small consolation for not having the actual Wacken, but hopefully it helps at least a little, and reminds us all what we (hopefully) have to look forward to next year.

Hit play and start Wacken off:

Sponsored Links from Across the Internet
Show Comments
Related Articles
Contests 0
Win This Contest and Even Your Crappy Nü Metal Revival Act Can Play Wacken
October 29th, 2022 at 10:42am Hesher Keenan

The competition is going to be steep.