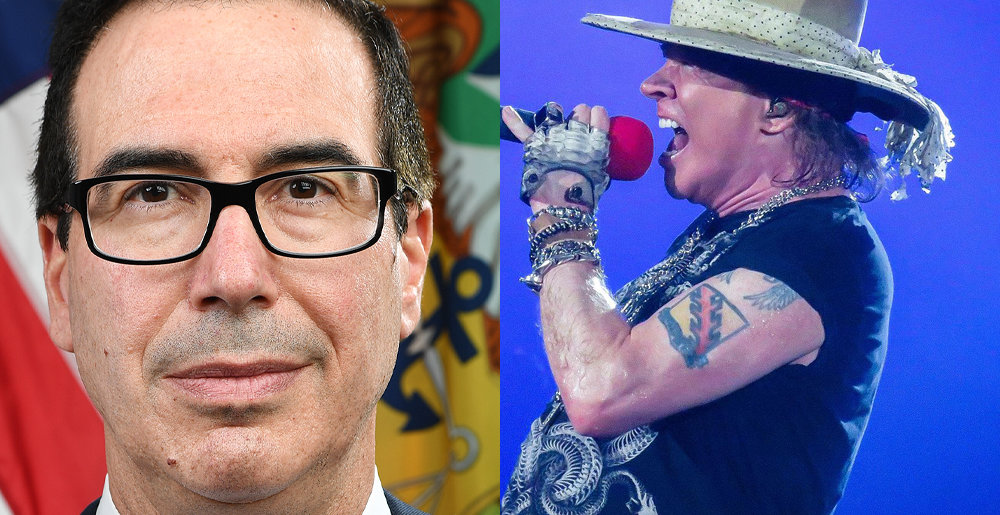 Folks, I know life is bizarre right now, but you can’t deny that these are also fascinating times in which we’re living. Like, after 9/11, I distinctly remember thinking, “Well, that’s my generation’s great collective trauma out of the way, it’s gonna be smooth sailing from here on out!” And then the country elected a reality show host to the highest office in the land, and I thought, “Woof! Well, it DEFINITELY cannot get any stranger than this!” But now there’s this whole pesky pandemic thing and we’re all walking around with masks and the whole world is shut down and it’s like, “Gosh, how kooky! This is gonna be one to tell the grandkids about! Surely, this is the weirdest thing that I will ever experience in my lifetime!!!”

Except then Axl Rose, lead singer for Guns N’ Roses, went and got into Twitter spat with Steve Mnuchin, the United States Secretary of the Treasury.

What happened is this: Rose, an outspoken critic of the Donald Trump administration and a vocal supporter of social distancing, sent out a tweet last night in which he called Mnuchin “an asshole.” This was, presumably, in response to Mnuchin’s refusal to adjust restrictions dictating how small businesses must use emergency government loans to stay afloat during the pandemic.

That Mnuchin replied at all is odd, for all of the aforementioned reasons. Also, as this Twitter user noted:

And yet, that’s STILL not the most peculiar thing about the fact that Mnuchin responded! That honor goes to the fact that the flag in his tweet is not the American flag — it’s the Liberian flag.

Someone must have pointed this out to Mnuchin, because he then deleted his original tweet and sent a new one with the correct flag, thereby demonstrating how much he cared about trying to put Axl Rose in place, thereby making this entire incident even more ludicrous.

As of this writing, Rose hasn’t acknowledged Mnuchin’s reply. Which is probably for the best. I don’t know if my heart can take much more of this.

[via Metal Injection and Bring Back Glam!]

Metal Sucks Greatest Hits
0 -
Today in Dream Theater Shirts: Metalhead Veterinarian Fired for Bestial*ty
0 -
Danny Worsnop is a Good Writer
0 -
Former Attack Attack! Bassist John Holgado is the Stupidest Human Being Ever
1730 -
Leyla Ford’s Eleven Cardinal Rules of Attending a Concert
0 -
Nazi Imagery: Why Watain and Marduk Don’t Get a Pass While Slayer and Metallica Do
0 -
Ministry’s Al Jourgensen: “I Got Paid to Humiliate Fred Durst”