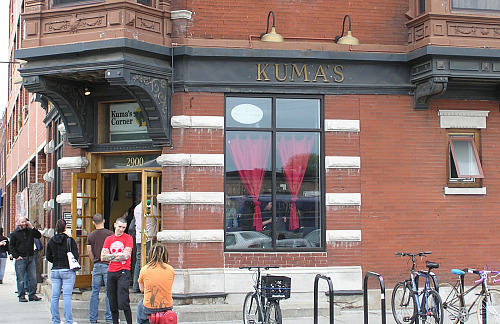 A new Instagram account that has been launched to “anonymously share stories of racism and abuse in the Chicago restaurant industry” has posted accusations against long-running metal-themed restaurant, Kuma’s Corner, alleging that its owners and management harbor a racist, sexist and homophobic culture.

The account, @the86dlist, has picked up over 15,000 followers since its launch in early June and has attracted attention from not only Chicago but beyond, during a moment when the nation is having frank discussions about race, gender, sexuality and workplace culture in the wake of the murder of George Floyd.

Former employees of Kuma’s allege that owner Ron Cain has actively tried to discourage black patrons from coming to the restaurant, has shifted employees accused of sexual harassment to other locations after telling victims they’d been fired, offers discounts to police officers (greater than those employees are allowed to offer friends and family), parks his car in a handicapped spot, and more.

Kuma’s Corner has four locations in Illinois and one in Indiana, and serves metal-themed burgers and sandwiches with names like The Black Sabbath, the High on Fire, the Mastodon, the Neurosis and more. Oftentimes the restaurant’s menu items are direct collaborations with bands.

“I’d like to remain anonymous because it’s hard enough to get a job in this toxic-ass restaurant hellscape but once you start callouts, it’s nearly impossible. But you gotta know how gross the culture is at Kuma’s.

“Not only is the owner a racist, homophobic, ‘park my Kuma’s license plate SUV in a handicapped space’ douchebag who is pro police and ICE. But he, his wife (who is in charge of HR) and *some* of the management have fostered a culture of racism, homophobia and sexual harassment that goes unaddressed to this day. Employees who speak up eventually wind up having their hours cut or they’re fired for arbitrary reasons. They LOVE to fire people there!

“It is an incredibly white environment FOH [front of house]. When I was working there we had only one black server who was constantly given a hard time about petty things like how she kept her hair and her ‘compliance’ with their dress code (while other white employees wore whatever tf they wanted) until she got tired of it and quit. The only server that was a POC was fired in the middle of a shift by the *completely shitfaced* owner for not smiling enough. I don’t think I’ve ever seen a black FOH employee there since. There has never been anyone black in their leadership ranks either, to my knowledge.

“Once when a position was open (and one always is), a gentleman who worked in a restaurant across the street came in to apply. He is gay and Mexican and has a very good reputation for being incredible at his job. When he left I overheard management saying his ‘personality is just… too much’ (which really sounded like code for ‘he’s too flamboyantly gay’ to me). They have since hired many employees from that same restaurant with less stellar records, who have all been white and straight. I often saw women who were considered ‘butch’ and men who were considered ‘femme’ in their presentations denied the opportunity to even apply.

“I regularly overheard managers and staff mocking customers who asked to have their pronouns respected. I had a very nice regular who was a trans woman and came in for a beer during lunch hours who was visibly uncomfortable with this behavior. She stopped coming shortly before I left.

“At a meeting, after the woman who was the GM at the time (and now oversees catering) gave us some speech about how Kuma’s stands for ‘being different’ and wants to be considered a ‘home for misfits,’ I asked her if there were plans for policies that ensure their bathrooms are transgender-friendly. She LAUGHED OUT LOUD, said ‘no’ and walked away. This woman is incredibly verbally abusive to staff and makes no apologies for it. She regularly stalks and harasses people and uses her cop boyfriend to intimate people she doesn’t like.

“This establishment is VERY pro-police. They get a 30% discount and often have their meals comped entirely. For this reason, one location of theirs in particular is FULL of police and detectives during lunch hours. Of course, the BLM pin I wore on my jacket while serving them was made a fuss over, and I was told that I ‘really don’t need to be wearing a jacket while working.’

“On one occasion, a group of bikers came in to dine who had white supremacist patches on their jackets. A server voiced her opposition to waiting on them, and the open-window kitchen seemed very uncomfortable with them. The server was told that they would not be turned away and were to be treated like any other customer. The manager wound up waiting on them instead.

You can read the full post below. MetalSucks has reached out to Kuma’s Corner for comment but did not immediately hear back. The Chicago Tribune also attempted to contact the restaurant but got no response.

The restaurant’s owner acknowledged certain issues raised by anonymous accusers but ignored others.

We review the latest from the band with the most confusingly-named burger on the Kuma’s Corner menu.