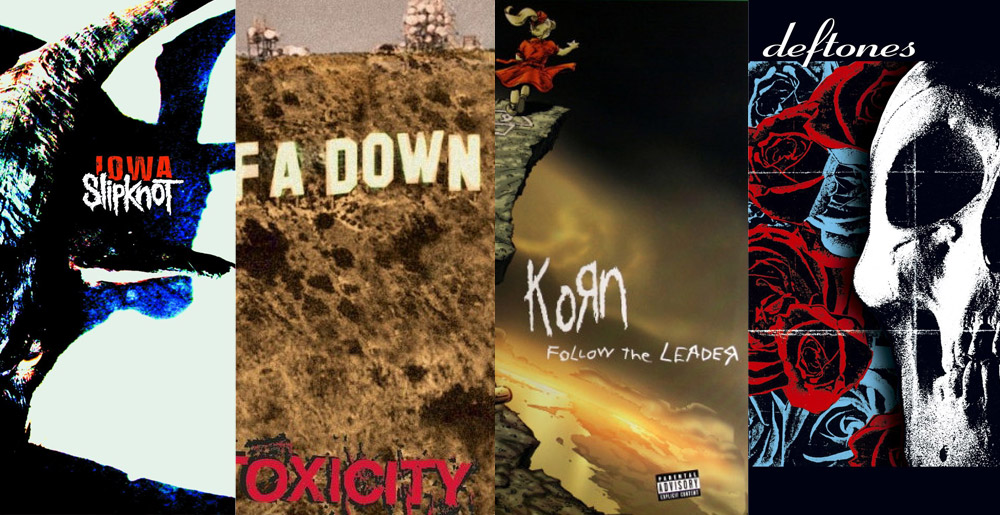 Nu Metal “Big Four” Album Sales Compared: Slipknot vs. Korn vs. Deftones vs. System of a Down

When folks utter the phrase “The Big Four,” they’re typically talking about the titans of thrash who ushered in a whole new era of metal in the ’80s: Anthrax, Megadeth, Slayer and, of course, Metallica. But the phrase “Big Four” has since opened up to encompass the top four acts — in terms of popularity, cultural importance, longevity, etc. — in any genre of metal. Who are the big four of death metal? Black metal? Metalcore? Etc.

Last month we compared vinyl sales of the Big Four of thrash side by side to see how they stack up against one another using a variety of metrics provided by Discogs, the biggest and most comprehensive music database, social network and marketplace all in one. This month we’re doing it again… for everyone’s favorite punching bag metal sub-genre (until they sheepishly admit they grew up on the stuff): nu metal!

For the purposes of this article, we’ll be comparing vinyl sales of albums by Slipknot, Korn, Deftones and System of a Down. You may take exception to that list as the definitive Big Four of nu metal — haven’t some of these bands transcended the genre? shouldn’t Limp Bizkit and/or Linkin Park be included? etc. — but that’s what we’re going with. If you disagree, we’re sure there’s a MetalSucks commenter willing to argue with you.

Let’s start with Slipknot, since they’re the obvious choice for “biggest” band of the group based on the layperson eye-test for popularity; in a word, they’re the Metallica of this group (a look of MetalSucks site traffic bears out that assumption). Slipknot have sold 11,127 copies of vinyl on Discogs since 2010, not including bootlegs. Their most popular release on Discogs is Vol. 3: (The Subliminal Verses), but only by a hair: it beats out Iowa by only six copies, with 943 Discogs users listing it as a “have” to Iowa‘s 937.

Here’s where things get interesting: Iowa is in WAY more demand. A whopping 1,993 users on Discogs list Iowa as a “want,” meaning they want but do not have the album, compared to only 97 wants for Vol. 3. Put another way, pretty much everyone who sought out Vol. 3 already has it, but Iowa is way more hard to find and in higher demand. The lowest price for a copy of Iowa currently selling on the platform is $385; holy shit! Comparatively, Vol 3. can be had for as little as $3.

But wait — here’s the real shocker! Slipknot are not the most popular band of the Nu Metal Big Four when it comes to vinyl. They’re not even the second most popular. That honor belongs to Korn! Korn have moved 14,868 pieces of etched plastic since 2010 on Discogs, with their most owned album being 2002’s Untouchables. Once again, it’s very close: the top five Korn albums are all within 40 copies of each other. Take a look at the “haves” column here:

Unsurprisingly, it’s Follow the Leader, the band’s explosive 1998 album with some of their best-known hits, that has the highest minimum price of the bunch, by a good margin: the least expensive copy is currently going for $60 compared to $25 for next highest-priced minimum, The Nothing.

Deftones grab the #2 slot when it comes to the Nu Metal Big Four vinyl club. They’ve put up some solid numbers with 12,013 copies of their records sold on Discogs, but it’s their 2003 self-titled affair that’s the most-owned, not White Pony or Around the Fur like one would probably guess (those don’t even make the top six — maybe they’re just that rare and hard to find). Deftones (the album) is also the most in-demand, with 407 wants to the runner up’s 305. It seems that release really resonated with fans at the time, despite the band themselves since saying that they’re not too fond of it.

Rounding out the Big Four of Nu Metal are System of a Down, who we have to imagine would’ve ranked higher if they’d put out new music in the past 15 friggin’ years. Still, their numbers are quite impressive: 9,784 copies sold since 2010. Toxicity notches the most “haves” with 839 (Steal This Album! places a distant second with an appropriate 666 “haves”).

But it’s the “wants” where we really see how popular System of a Down still are, especially compared to the other three bands in discussion here, and even without new music in a decade and a half: Toxicity, Steal This Album! and Mezmerize each beat out every album by every band on this list except for Slipknot’s Iowa. Check out that “want” column:

If there’s one thing System of a Down have been great at for the past decade and a half, it’s making themselves scarce, and that certainly plays into effect here. That scarcity has led to those seeking out their releases having to fork over a pretty penny for them: Toxicity is going for a minimum of $149 right now, and has historically sold for much higher. Here are the top five System of a Down album sales ever on Discogs:

We’ll be back in a couple of weeks with another deep dive into metal record collecting data. What would you all like to see next: the Big Four of death metal? Black metal? Metalcore? New wave polka-core? A list not devoted to any Big Four? Tell us in the comments and don’t forget to search for records over at Discogs.