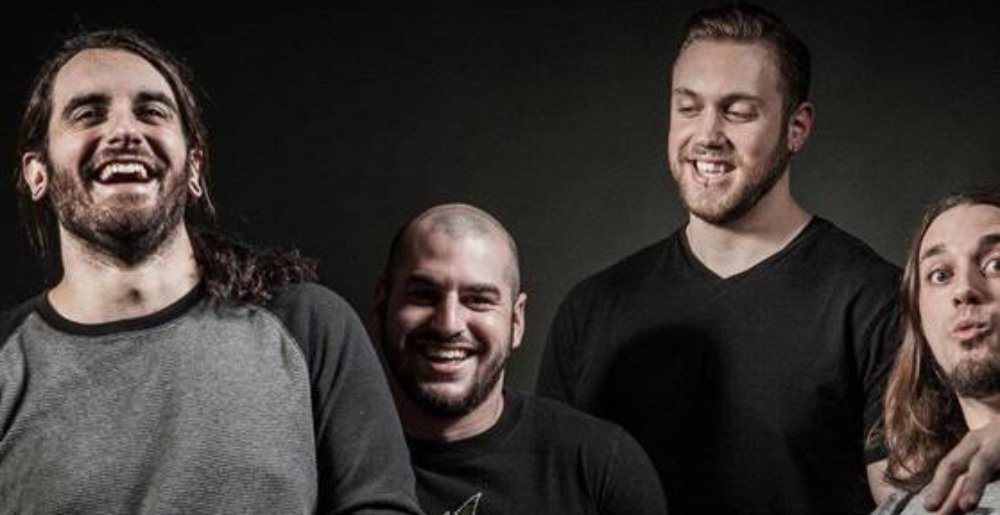 Kids. College degrees. “Real” jobs… aka life. These are things that held up Job For a Cowboy from touring in support of their widely loved 2014 album, Sun Eater, and they are also the reason it’s taken the band this long to write a follow-up. In part one of our exclusive chat with frontman Jonny Davy, published earlier this week, we got caught up on what the band members have been doing for the past six years. Today, in part two, we’ll learn what comes next.

One thing is for certain: Job For a Cowboy entered entirely new musical territory with Sun Eater, a prog metal opus that stood in stark contrast to their genesis (pun intended) as deathcore poster boys. And they do not plan on looking back.

“Nostalgia is a powerful drug. We’ve kind of had different iterations or different ‘sagas’ in the band,” Davy muses. “Our sound has been pretty different record to record, the band’s sound has changed a bit especially the very, very early stuff compared to Sun Eater. It’s almost like we have different small pockets of fans depending on what era they’re particularly fond of.”

We ask Jonny the obvious: which ‘saga’ of the band is their newest material most reminiscent of? “We’re kind of looking at this as a sequel to Sun Eater,” he fires back without any hesitation. “The lyrical themes tie into the last record.” But Davy is quick to qualify that statement, making it clear that they’re not simply re-treading the same path worn with that album. “I would say this record is very similar to Sun Eater but we’re still trying to move the needle a bit, trying new things, kind of like we always have. I think that’s always been our motto, not to be stagnant and to just have fun with it, to try new things. I think everyone’s musical tastes changed a little bit over the years and our music kind of changes with it.”

While the proggy, adventurous direction of Sun Eater was heralded by so many, a sub-section of the band’s fanbase — those with them from the very earliest days — was not happy with the lack of chug, brees or anything whatsoever resembling deathcore. That vocal minority loudly condemned the band and refused to get on board. Did that bum Jonny out?

“Um, yeah. I hate to say it. I read quite a bit of [online comments]. Just to torture myself, I think.” It’s OK, Jonny… we’ve all been sucked down that rabbit hole! “I need not to, but I think I’ve always been prone, especially when the band, in the early stages we had such a backlash in the metal community for whatever reason. We got stuck with the stigma of being that sort of social media deathcore type of band. But as far as people getting bummed out, I could totally understand why someone who liked the Doom EP doesn’t like Sun Eater,” he says of their 2005 EP while laughing. “They’re entirely different records. It’s totally understandable.”

Despite the drug-like nature of nostalgia he described earlier, Davy doesn’t plan on looking back to satiate those fans with an anniversary tour celebrating the band’s old work. “We’ve gotten asked that MANY times, I can’t tell you how many times we’ve been asked to do a Genesis reunion tour, a Doom EP tour. I know a lot of bands, our peers, did that sort of thing, but I think with us we just always wanted to do a Sun Eater tour in full, just the latest and greatest. I couldn’t picture us ever doing an anniversary tour; that’s something that’s never really had any interest to us.”

As we learned earlier this week, the band will be recording in October and November with producer Jason Suecof, who handled their last three albums, in a piecemeal fashion one musician at a time to adhere to Covid-19 safety precautions. Guitarist Tony Sannicandro, who is in medical school in Ireland, will be effectively phoning it in from there. Jonny won’t commit to a release timetable due to the fluid nature of the pandemic world and the fact that the music isn’t even on tape yet, but tells us he’s been going back and forth with Metal Blade about it and surmises a release in the first half of 2021 is likely, citing the label’s desire not to sit on it (Sun Eater was in the can for nearly a year before it was finally released).

After that, the band does plan to tour this time (once it’s safe to do so, of course), but certainly not at the intensity they did years ago. “Yeah! I will definitely say, ‘yes,’” he enthuses when we ask if touring will be possible in light of the band’s family and work commitments. “Again, I kind of hinted at it earlier, not to the extent we were [touring before]. We’re not going to be doing the back to back — I think maybe at one point we were doing 250 shows a year, I don’t know — it was pretty relentless. But a little bit of a sprinkle, essentially just special [shows and tours], we want to make sure the stars align and it makes sense for us, you know? Especially with how busy we are with jobs we have, with careers and schooling.” Jonny reveals that the band already had plans to tour in 2020… but, well, you know… that pesky pandemic.

Finally, the elephant in the room: who is playing drums this time around? Jonny audibly debates whether he wants to spill the beans just yet. We gently pressure him, and he caves. “We are actually going to have one of my really good, old friends, who I worked with on another project. I believe he is one of the most underrated metal drummers who, for whatever reason, I feel like he doesn’t get enough credit. Navene Koperweis is going to be playing drums on this record.” We share our excitement over this fantastic news as we counter that Koperweis, who has played in Animosity, Animals as Leaders and is currently doing so in Entheos, is most certainly not under-appreciated, in our book anyway! “I just always feel he should be bigger than he is from a namesake perspective,” Jonny laments. “He’s one of those guys who can do it all. I feel like he gets put in this box where he’s looked at as particularly a death metal drummer, but he can do so much more than that.”

“He’s great. We go way back,” Davy explains of his relationship with Navene. “I was on my first whole Job For a Cowboy tour with him and Animosity. Our first tour was with them. Then we did a little project together called Fleshwrought, what was it… in 2011? 2012?” It was actually all the way back in 2010; there it is again, our old favorite drug nostalgia, distorting time. “So we’re pretty pumped on it, he’s a good ole’ pal.”

Navene’s drums have likely already been tracked as you’re reading this. He was set to enter the studio with Suecof on August 25, according to Davy.

Despite all the hype, Davy is keeping clear eyes and a full heart. “I still think it’s not going to matter a whole lot until we drop a song. I think that will make the biggest impact.”

Reflecting on how the band’s absence has only elevated their profile and increased anticipation, Davy, always looking ahead, ponders what’ll happen after this album is out. “Yeah, the next record after this, we’re definitely going to think about, what has this been, six or seven years? We’ll do 10 at least. Maybe we can get more traction that way, that’s how it works these days.”

It’s called Arrows in Words From the Sky, and you can hear some brief samples of it now.

The Webernets 0
Job For a Cowboy Frontman: “We Were the Biggest Posers in the World”
December 8th, 2020 at 10:29am Vince Neilstein

Metal Sucks Greatest Hits
0 -
Why are metal fans hopelessly stuck in the past??? :(
0 -
New Candidate for Most Metal Wedding Ever: Bride and Groom Shred Down the Aisle
0 -
Twenty More of the Worst Heavy Metal Album Covers of All Time
0 -
The Best Metal Albums of 2013, As Chosen by Metal Musicians Themselves — Part I: Machine Head’s Robb Flynn
350 -
MetalSucks Exclusive: Jeff Loomis’ First Interview Since Leaving Nevermore
3220 -
What is UR Favorite Classic Nu-Metal Band??