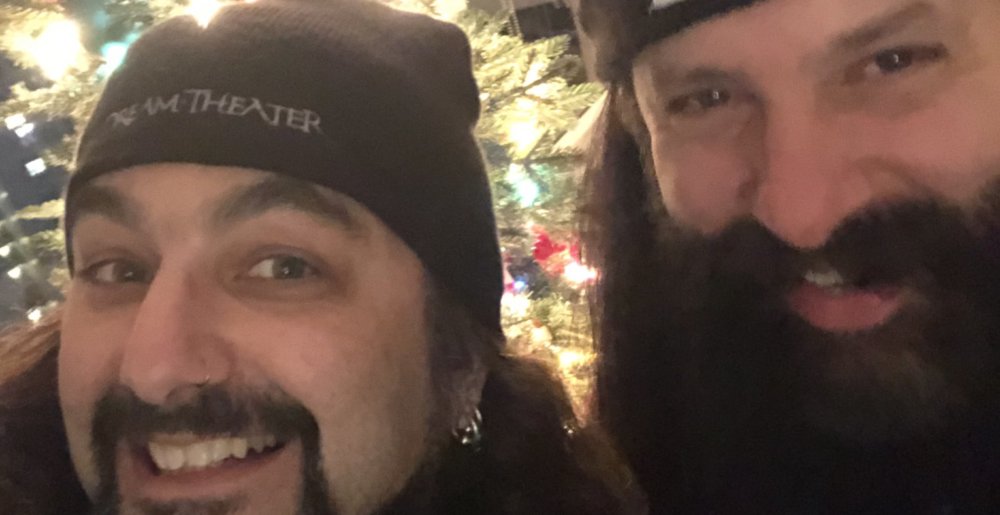 The dominant storyline surrounding John Petrucci’s new solo album, Terminal Velocity, has been his reunion with ex-Dream Theater drummer Mike Portnoy. That’s kind of a shame — it’s the dude’s first album in fifteen friggin’ years, was highly anticipated, and is quite good — but that’s the way the metal news cycle works these days. On the other hand, maybe it’s to John’s benefit: all those Portnoy headlines mean more eyeballs on the album’s existence, which naturally leads to more listeners.

In any case, as Petrucci continues to be bombarded by questions about working with Portnoy, Metal Wani got his in too (as I would’ve! no shade), specifically asking about the possibility of Portnoy being a part of Petrucci’s live band if the latter ever tours this material.

But first, when asked about the recording process for Terminal Velocity, Petrucci had some kind words for Portnoy’s contributions:

“Well, it’s a miracle how this turned out the way it did because I wrote and recorded the entire album before anybody played on it. So yeah, I recorded all the guitars, the final guitars, and the songs were done and programmed some drums and played bass.

“So they were in a format that people could learn, but you know, the recorded guitars weren’t going anywhere.

“I wasn’t re-tracking them, they weren’t being moved or tempos change or anything, so the challenge, and I think it’s more of a challenge for a drummer – with Mike in this case – was to play to that and have it sound interactive and have it sound like there is some kind of feeling that we’re playing together, even though we weren’t, and that there is some sort of ebb and flow of feel and tempo even though there isn’t.

“So that’s a testament to Mike’s playing. He played to my tracks, he came up to my studio, and we recorded drums in the studio, but he was playing to tracks that were already recorded.

“I think that the interaction you’re hearing is probably due to the history that we have together. When he hears what I’m playing, he instinctually knows how to respond and react, and the things that I like that he plays and gravitate to.

“I’m like, ‘Yeah, whatever you did there, it’s great. It’s awesome.’ But the way Mike recorded it, I mean, he tracked each song maybe two times, three the most, and the tracks were built from that.

“So it’s coming very instinctually for him, and it’s probably due to the history that we’ve had together because it seemed very, very natural.”

Next, when asked about the possibility of bringing Portnoy out on tour to support the record, Petrucci responded in the affirmative (Portnoy previously joined Petrucci as drummer on the G3 tours in 2001, 2002, 2005, 2006 and 2007):

“Yeah, I would play it together; I don’t think that’s going to be the focus once the world gets back to a place where live performances are possible and touring comes back, the focus will be with Dream Theater for me.

“But sometime down the road, something’s gonna come up – whether it’s a G3 tour, whether I decide, ‘Hey, I have a little bit of time, I’m gonna do a little solo run’ or whatever…

“Yeah, I would love to play with Mike and Dave live, I think that’d be fantastic.”

Next, an update on the timetable for new Dream Theater music, saying the band will likely gather later this year to write:

“This will be new music from scratch, yeah. As you said, we sort of shifted our schedule because touring realistically may not happen until this time next year or later.

“I mean everything could change if there’s a vaccine, and when it does change we’re not really sure what state things will be in, so with all that in mind…

“Not that I’ve been sitting around, I’ve been super busy with all this, but as far as Dream Theater is concerned, let’s not sit around and let’s be creative together and make new music, even if it won’t come out until 2021 at some point, probably later in the year, let’s get together and do this.

“So yeah, we’re going to do that, we kind of pivoted our schedule and if things in the world change, then we can make another change, and that’s how we’re playing it.”

Don’t get your hopes up, Dream Theater fans: Petrucci has already said Portnoy won’t be rejoining the band.

Check out the full interview with Metal Wani below. Thanks to Ultimate Guitar for the transcription.