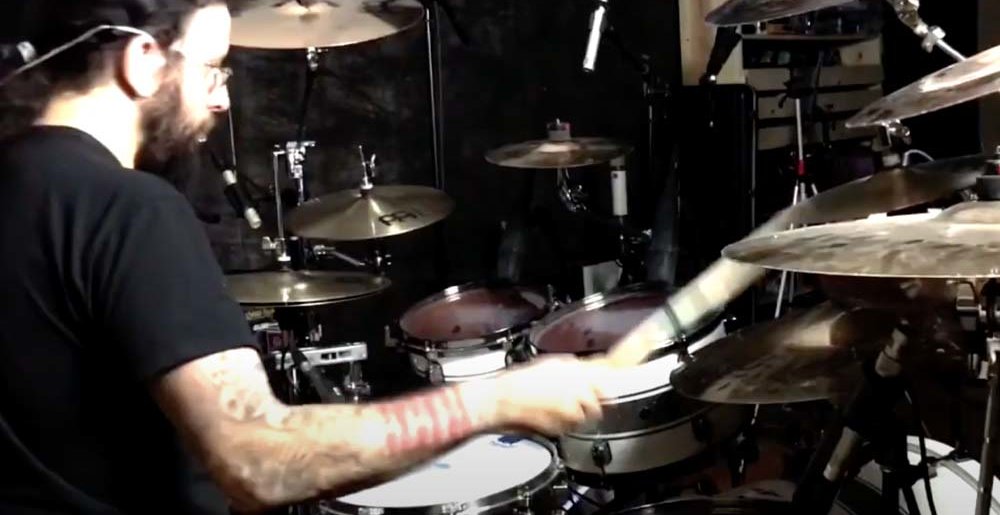 Fear Factory have shared two new studio videos chronicling the making of their new album — one of which features drummer Mike Heller playing a new song. You can check out out both clips below, as well as previously-released FF studio videos here.

The new Fear Factory album is already shrouded in controversy:

In 2018, vocalist Burton Seabell said, “Fear Factory has a record done. It’s delivered to the label. We’re just waiting for some legal technicalities [to be sorted out]. And the record’ll be out next year.” A year later, we learned that those “legal technicalities” involved a dispute between Seabell and former members Christian Olde Wolbers and Raymond Herrera, and it became clear that there would be no new Fear Factory album released until that conflict was resolved. Finally, earlier this month, Cazares announced that there would be new Fear Factory music in 2021. Fear Factory then launched a crowdfunding campaign to raise $25,000 in order to complete the album…

…but that very same day, Seabell took to Twitter to assert that “I am not part of, nor am I benefiting, from any GoFundMe Campaign.” He later called the campaign a “scam” intended to raise money not for the band, but “for Dino’s legal bills.” Cazares shot back by assuring fans that none of the money would be used for “anyone’s personal legal fees,” and that all of it would go towards raising the album to a sonic level on par with the band’s past releases, including tracking live drums (instead of the programmed ones on their 2012 album, The Industrialist), re-tracking some parts, and bringing back the production team of Rhys Fulber, Damien Rainaud and Andy Sneap to polish it up.

MetalSucks’ own Vince Neilstein spoke to Cazares last week, at which point the guitarist attempted to clear up some of the brouhaha, revealing that he is now the sole owner of the Fear Factory brand, and that he hasn’t spoken to Bell in over a year. You can read the entire interview here.

Metal Sucks Greatest Hits
0 -
MetalSucks Readers Declare Pantera The Most Unnecessarily Shat Upon Band in Metal!!!
0 -
Heavy Metal Drinking Games
0 -
Phil Anselmo on Hearing the End of Pantera’s “Hollow” for the First Time: “I Was Floored…”
0 -
Detailed Analysis: Vest Metal is Officially the Next Annoying Trend in Metal
0 -
What in the Mother of F*CK Did I Just Watch???
0 -
12 Embarrassing Albums That Everyone Owned Back In The Day