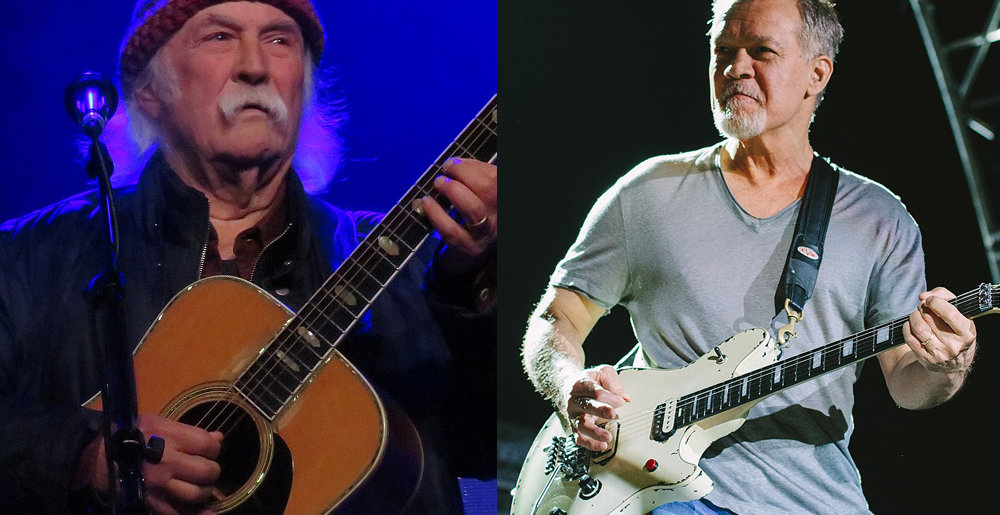 In a touching display of sensitivity and intelligence sure to endear him to every Van Halen fan across the globe, David Crosby (Crosby, Stills, and Nash) has declared guitarist Eddie Van Halen, who died from cancer last week at the age of 65, to be “Meh.”

No, seriously (screencap here in case it gets taken down):

Shockingly, Crosby’s tweet pissed a lot of people off, including notable musicians such as Alex Skolnick (Testament) and Tracii Guns.

“I appreciate David Crosby too much for this to get in the way, but a much better answer would have been: ‘I know he meant a lot to so many but his sound & style just weren’t my thing.’”

“Wrong answer as fuck and rude as fuck!!! There are better ways to say you don’t care for someone’s music. That was very disrespectful. And yes straight out fuck you and your smug answer.”

Crosby later attempted to clarify his position, although I don’t know that he helped his case much:

“Hendrix changed the world of guitar. Nobody else really …look I get it ..many of you loved Van Halen ….and the one time I met he was nice ….and he was talented …meh to me means I don’t care that much ….and I don’t …doesn’t mean he wasn’t good ,he was but not for me”

In Crosby’s very meager defense… He’s 79-years-old. The fan who tweeted at him specifically asked for his opinion, to which he is entitled. And, yeah, he was clearly never Van Halen’s target audience.

Not so much in Crosby’s defense: in addition to being a cruel thing to say about someone who died less than a week ago, it’s ignorant. Even if you never cared about Van Halen… even if you actively hated their music… to deny Eddie Van Halen’s contribution to rock guitar is to make a ridiculous assertion on par with claiming Earth is flat. Yes of course Hendrix changed the world of guitar. Guess what, bud? It’s possible for two different artists who emerged in a relatively young medium more than a decade apart to be important and influential to that medium! Saying one “changed the world of guitar” does not negate the other’s achievement.

You can view all the tweets with your own eyeholes below. Then head to the comments section to talk shit on Déjà Vu.

The new album will be out this April.

New Stuff 0
We’re About a Year Away from Testament’s Next Album
December 26th, 2022 at 1:20pm Hesher Keenan