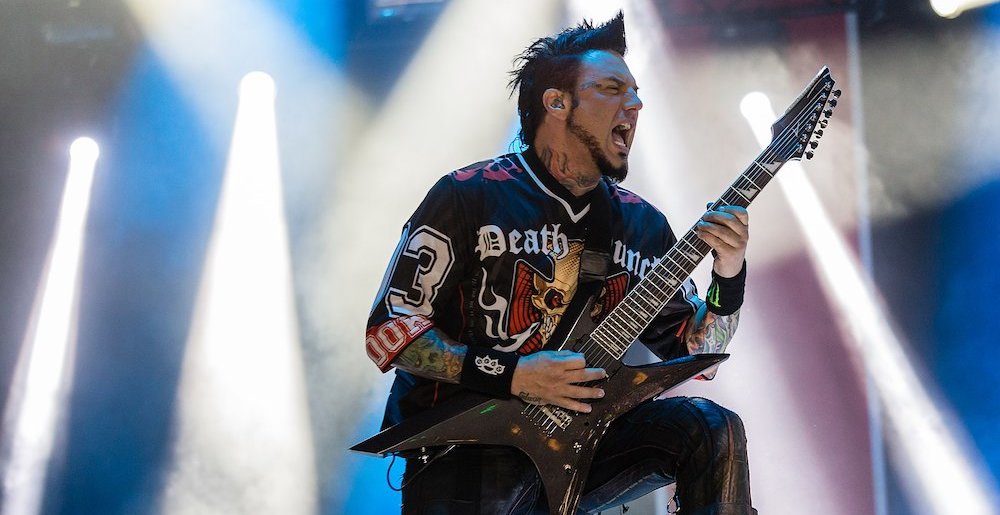 Following more than a month of rumors and speculation, guitarist Jason Hook has all but explicitly confirmed his departure from Five Finger Death Punch.

In a video statement released yesterday (October 11) from Cabo San Lucas, where he is currently enjoying his honeymoon, Hook said (transcription courtesy of The PRP):

“I just wanted to say a heartfelt thank you to all of the fans of Five Finger Death Punch for all of messages that you’ve been sending me about you know what. I’ve kinda been issued a gag order, so I’m not saying anything. But I’m very excited about the things I’m working on and I’m looking forward to sharing them with everybody.

“And when the time is right there will be a mutually agreed on press release between me and my guys and that’s it.”

“I’ve got tons of new songs that I’m gonna release and I want people to hear them. I don’t expect to make money, I don’t expect to climb the top of the charts. I didn’t care about any of that… the music business is sort of in the toilet, so it’s not really about that anymore. It’s just about getting off on it and getting fired up and creating something that’s exciting for me and hopefully translates to be exciting for you.”

Hook went on to reveal that he has “eight projects on the go and I’m excited about every one of them.”

Rock Feed points out that a FFDP promo photo (below) recently utilized by Spotify for their Kickass Metal playlist includes well-known British shredder / solo artist / YouTuber Andy James (ex-Sacred Mother Tongue), who has been touring with the band, in place of Jason Hook. The group has yet to confirm James as a permanent addition to their line-up.

Fans began to wonder about Hook’s status in the band back in August when Five Finger Death Punch released a series of YouTube clips in which they watched their own music videos and commented on them in the style of Beavis & Butt-Head meets Mystery Science Theater 3000. Singer Ivan Moody, guitarist Zoltan Bathory and bassist Chris Kael, who all live in Las Vegas, gathered together in one location to shoot the series. But Hook, who also resided in Vegas, was missing. Hook was also missing from the band’s music video for “A Little Bit Off” and was not pictured in a photo the band posted on Instagram to celebrate reaching 1 million followers.

Hook replaced guitarist Darrell Roberts (ex-W.A.S.P.) in 2009 and appears on all of the band’s albums save for their 2007 debut, The Way of the Fist. He is the second member of FFDP’s most well-known line-up to date to leave the band, after drummer Jeremy Spencer, who departed in 2018. Spencer went on to become a part-time police officer, the full-time frontman for the band Psychosexual, and an aspiring pornographer.

This past Friday, October 9, Five Finger Death Punch released A Decade of Destruction, Vol. 2, a compilation including “12 of the band’s most popular radio and streaming favorites that were originally recorded for the Prospect Park label during the group’s first decade of existence.” You can stream that below.