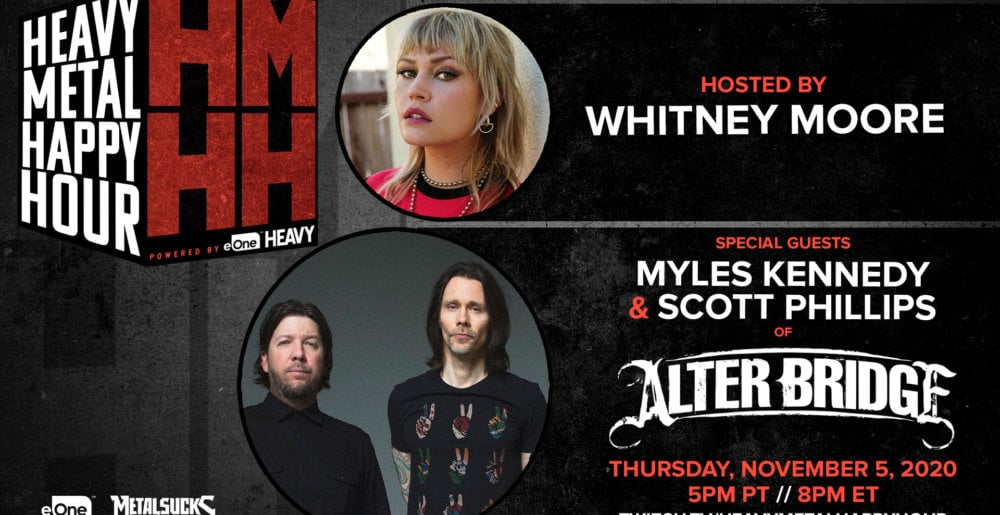 Our Heavy Metal Happy Hour livestream series continues this Thursday, November 5 with special guests Myles Kennedy and Scott Phillips of Alter Bridge! This will be our final episode of the season, so make sure you tune in!

Myles and Scott will join host Whitney Moore to talk about Alter Bridge’s new EP, Walk the Sky 2.0, what they’ve been up to during quarantine, and whatever the heck else they want as Whitney spins metal tunes while fans ask questions and chat with the band members and one another.

Tune in to Heavy Metal Happy Hour via Twitch on Thursday, November 5, at 8pm EDT / 5pm PDT! The broadcast runs for an hour. Don’t be late! And don’t forget to bring something delicious and alcoholic to drink!

Note: an earlier version of this post stated that AB guitarist Mark Tremonti be joining; while Mark isn’t able to make it, Myles while now be joining Scott in his stead.

Here’s a clip from last week’s episode in which Unleash the Archers’ Brittney Slayes talks about the insane experience of being on the road right as the pandemic hit: