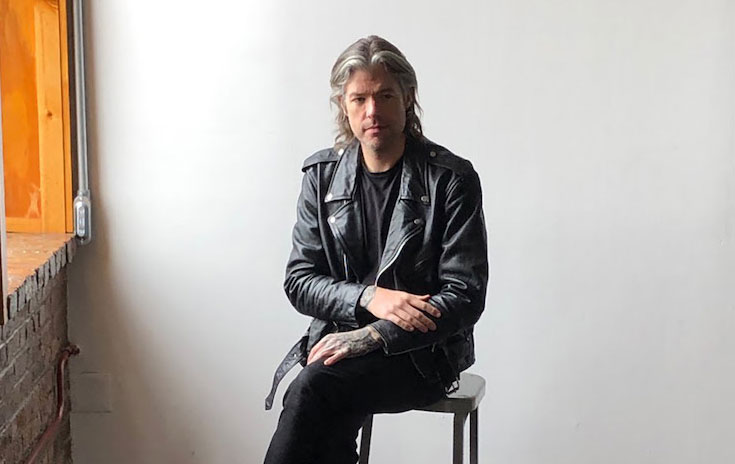 Pallbearer bassist Joe Rowland was our guest on the Heavy Metal Happy Hour livestream earlier this fall, joining us from his bedroom studio filled with tons of synth gear. Host Whitney Moore naturally asked about all of that — not what you’d necessarily expect from a metal musician, although hardly surprising for a creative fellow — and Joe was all too happy to answer, describing his newfound affinity for synthesizers and the music he was working on at the time.

Now we finally get to hear what he’s been brewing up in the form of his newly monikered solo project, Hosianna Mantra, and its debut album, Particle Mythology. And — no surprise here given Joe’s work with Pallbearer — it’s excellent!

Hosianna Mantra’s music doesn’t lean as heavily on hard-hitting dance beats, razor-sharp analogue synth leads or dream-pop soundscapes as most synthwave, instead utilizing an armada of synthesizer sounds as orchestration over songs that are essentially structured like rock songs, albeit down-tempo, morose and decidedly not rock sonically-speaking. That’s a good thing: there is more than enough traditional synthwave in the world from the past five years of the genre’s explosion, so something like this is a welcome change. Get in the mood, fire it up, and vibe with these sounds in the background as you do whatever it is you’re doing today.

Listen to Particle Mythology below or download it via Bandcamp.

The synthwave pioneer is making good on his promise to leave synthwave behind.

Metal Sucks Greatest Hits
0 -
What Will Happen When a Member of Metallica Dies?
0 -
Photos of Metal Musicians When They Were Kids
0 -
Incredibly Metal Six-Year-Old Girl Terrorizes America’s Got Talent
3160 -
Down With The Sickness: God Forbid’s Doc Coyle Takes on Mainstream Metal
0 -
Listen to Metallica’s “Nothing Else Matters” in a Major Scale
0 -
Students at British School Sing Iron Maiden’s “Flight of Icarus”