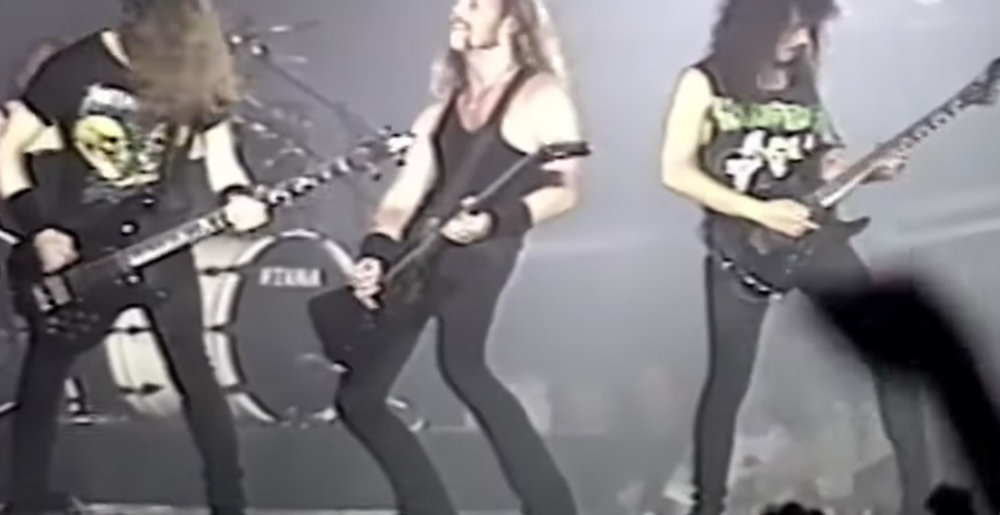 “Enter Sandman,” I don’t need to look it up to know, is Metallica’s single biggest hit on an album full of them and a career spanning nearly 40 years and ten studio albums. But guitarist Kirk Hammett didn’t think it stuck out from the bunch when the band were recording The Black Album with producer Bob Rock.

In a new appearance on Gibson Icons, Hammett spoke at length about the process of recording the band’s 1991 self-titled album (dubbed ‘The Black Album’ by fans), revealing that while he liked all of the songs, he didn’t single out “Enter Sandman” as a hit, nor did he think the album would become even close to as popular as it did. He explained:

“[Producer] Bob Rock came down to rehearsals for the ‘Black Album’ and he said to us, ‘No one has ever caught the power and energy of you guys live on tape or on vinyl.’

“And I thought about it, and I thought, ‘He has a point. There is yet to be a recorded song that captures the energy and the urgency that comes with seeing us live.’

“And that was his goal. And, to a certain extent, looking back at the albums that he did do, he caught a lot of energy in the studio.

“His whole way of recording us was so radically different than anything we’d ever done.’

“All of us playing together in the same room to record the drums was a milestone for us ’cause in the past, it was just James [Hetfield].

“And we honestly thought that whenever we were all playing together like that in a room that Lars [Ulrich, drums] always played better. And using that recording technique proved that that was the case.

“To me, that’s the thing that I keep on going back to – how good it sounds when I hear it on the radio.

“And when the album just started selling the way it did, I could not believe it. And I even had a bet with our tour manager. He said, ‘It’s gonna sell six million by this date.’

“Some of the best guitar-sounds that I have ever gotten in my life I’ve gotten with Bob Rock. And a lot of it is just chasing tones, blending amps, blending guitars.

“What I like about Bob Rock is that he is into the pursuit. If he hears something – a sound or a performance – he will pursue that, or make you pursue it until he believes you’ve reached that point.”

Metallica have managed to stayed busy during the pandemic. In May, they released a semi-acoustic, reimagined version of “Blackened.” Then, in August, they hosted a pre-recorded drive-in concert at hundreds of outdoor movie theaters and released a recording of last year’s S&M2 concert. A re-worked version of “Nothing Else Matters” is scheduled to appear in Disney’s upcoming Jungle Cruise movie starring The Rock and Emily Blunt. And the band hosted a virtual charity concert in November to benefit their All Within My Hands foundation, raising over $1.3 million.

Metallica are also deep into “some pretty serious writing” writing for their next album. After first floating the idea of working on new music while under quarantine in April, by June Lars Ulrich had revealed that Metallica were, indeed, in writing mode. James and Rob have both said they’ve been busy working on new songs, too, and Kirk Hammett has trumpeted the fact that he has over 600 song ideas recorded (after infamously losing his cell phone with 300+ ideas prior to the sessions for Hardwired).