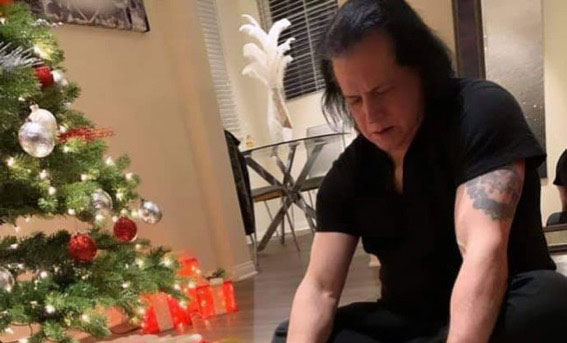 Glenn Danzig accidentally broke the internet earlier this week — as he has a habit of doing once every few years — when a photo of him wrapping a Christmas present found its way online.

The photo, which was posted and quickly taken down by Glenn’s girlfriend, the model and actress Ashley Michele Wisdom, will be providing Danzig enthusiasts as well as garden variety punk and metal fans discussion fodder for years to come as we analyze all the details within: what’s the state of Glenn’s toenail health? What ornaments does he decorate his Christmas tree with? What was he wrapping? The cult of Danzig will surely know no bounds to its curiosity, as rare as Danzig photos are (let alone ones this candid and domestic).

And now, the five best submissions we received from readers who put their imaginations (and their bosses’ time) to good use:

Thanks for playing! Those still wishing to try their hand at one of their own should post to social media and tag MetalSucks.

Metal Sucks Greatest Hits
3220 -
What is UR Favorite Classic Nu-Metal Band??
0 -
Photos of Metal Musicians When They Were Kids
0 -
Watch an Old Lady Rock Out to AC/DC’s “Highway to Hell”
0 -
Missed Connections: You Puked at the Ulcerate Show (M4M – Brooklyn, NY)
0 -
BREAKING: Joey Jordison Back in Slipknot as Percussionist!
0 -
Watch This 10-Year-Old Girl Shred Through Slayer’s “War Ensemble”