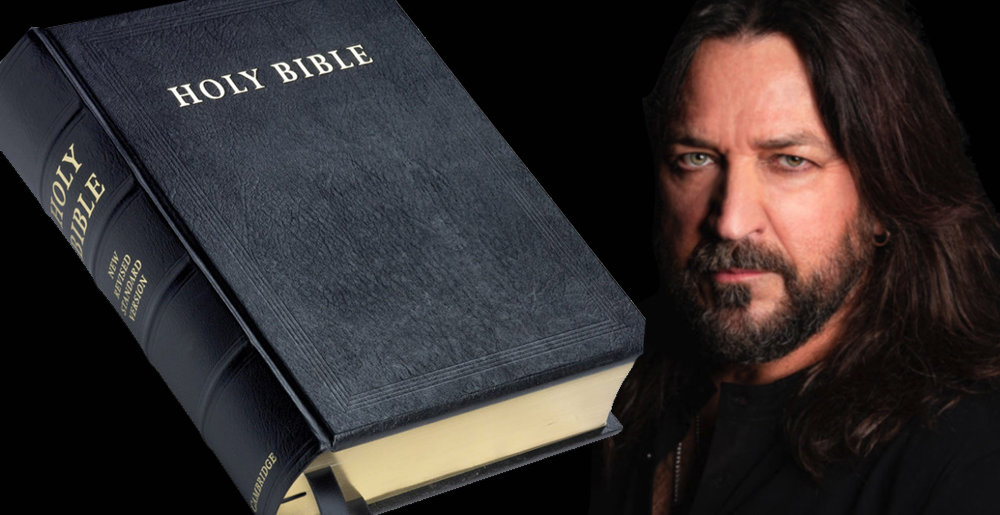 Specifically, in a tweet sent out earlier today (March 2), Sweet asserts that “it’s just a matter of time” until The Bible — the most popular book of all time — is “cancelled”:

“We’ve been handing out bibles [sic] for almost 40 years. For the first time in my life I’m asking myself this question – I wonder how long it will be before this book is cancelled? I know it may seem like a silly thought but it’s really not. It’s just a matter of time. Frightening!”

First, for clarification: if you’re wondering what Sweet means when says “We’ve been handing out Bibles for almost 40 years,” he means that Stryper, literally, throw small Bibles into the crowd during their concerts, the way most bands throw out guitar picks and drum sticks (which makes me wonder what it costs to print little Bibles, but that’s a whole other discussion I guess).

As for the rest of what Sweet says…

I assume the initial motivation for his tweet was the news that six Dr. Seuss books — And to Think That I Saw It on Mulberry Street, If I Ran the Zoo, McElligot’s Pool, On Beyond Zebra!, Scrambled Eggs Super!, and The Cat’s Quizzer — will no longer be published because they “portray people in ways that are hurtful and wrong.” Specifically, they contain racist imagery: according to the Associated Press, Mulberry Street features “an Asian person… wearing a conical hat, holding chopsticks, and eating from a bowl,” and Zoo “includes a drawing of two bare-footed African men wearing what appear to be grass skirts with their hair tied above their heads.” It’s weird for a lot of us to think of Dr. Seuss as being “racist,” and the oft-used “those were different times” argument applies here (whether or not that argument satisfies you is a whole other issue).

Regardless of whether or not you find these discontinuance of these six titles disturbing, it seems like quite a leap to say that the next book to cease being published will be The Bible.

For another thing, it seems worth noting that these are six of Dr. Seuss’ least-famous books. Maybe that’s a coincidence or “good luck” or whatever, but my guess is if The Cat in the Hat or Horton Hears a Who or How the Grinch Stole Christmas contained racist stereotypes, the Dr. Seuss estate would find some other way to deal with the issue.

I’m saying money plays a part here… and according to a 2007 report by The Economist, 100 million copies of The Bible are printed each year, and 25 million copies were sold in 2005 alone, according to The New Yorker. Even if those numbers have dipped in the 16 years since, that still suggests The Bible ain’t goin’ nowhere any time soon.

So, yeah, Sweet is being alarmist. And in case there’s any doubt of that, remember that on January 11 — less than a week after the riot at the Capitol — the singer took to Facebook to compare that insurrection to Black Lives Matter protests and ostensibly repeat Trump’s “very fine people on both sides” line:

“[W]e’ve witnessed many ‘violent’ attacks throughout 2020. We’re obviously a very divided country right now… There is good and bad on both sides and I think we all need to ask ourselves – Are we part of the problem or are we part of the solution?”

The Bible is available now wherever books are sold and a lot of places they’re not.

Sunbomb, the new project featuring Sweet and L.A. Guns’ Tracii Guns, will release their debut album,  Evil and Divine, on May 14 via Frontiers Music Srl. Listen to the first single, “No Tomorrows,” below, and pre-order/pre-save it here.

But the duo still “love each other.”

...And F*ck You Too 0
Stryper’s Michael Sweet Calls Women Who Take “Abortion Pills” on Video “A Whole New Level of Evil”
December 2nd, 2021 at 2:29pm MetalSucks

Sweet may suffer from eurotophobia.

Metal Sucks Greatest Hits
750 -
Anthrax vs. Axl vs. Anso: The Worship Music Double Review
0 -
Missed Connections: You Puked at the Ulcerate Show (M4M – Brooklyn, NY)
1220 -
MetalSucks Exclusive: One Year Later, Peter Steele’s People Speak About His Life, His Music, and His Last Days
0 -
A MetalSucks Exclusive: Return from The Graveyard — King Diamond on His Near-Death and New Life
0 -
Just in Time for Passover: Big Four Yarmulkes?!?!
0 -
A Detailed Analysis of Slipknot’s New Masks