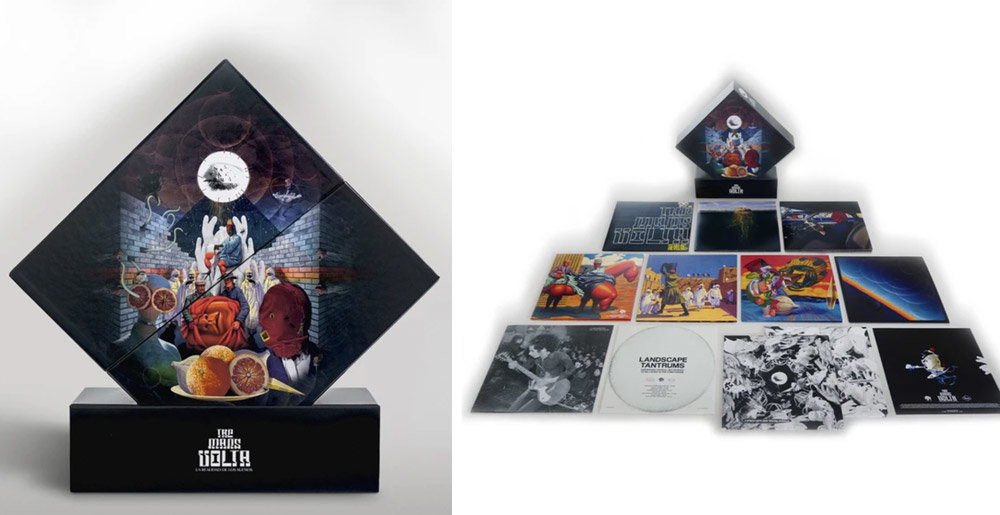 Later in the day we got our answer, and it was a resounding “Nope.” But that hasn’t stopped the band’s fans from greeting the announcement with just-got-a-text-response-from-my-crush levels of excitement and promptly emptying their wallets of nearly that entire $600 stimulus check they received last month.

Instead of new music, The Mars Volta are trafficking in the old, an 18 LP box set that contains all six of the band’s studio albums (on double vinyl) plus the Tremulant EP, the original unfinished recordings of the band’s debut album in the form of Landscape Tantrums, unreleased material from the De-Loused In The Comatorium sessions, a photo-book with exclusive behind-the-scenes shots, two pins, a box for storage, and a rack for displaying it all. Everything is pressed on 180 gram black vinyl, as you’d expect for something like this.

When did The Mars Volta attract such a rabid (and rich) following?? I assumed that most folks bailed like I did after the disappointment that was the follow-up to the incredible, desert island-level De-Loused, and all the subsequent let-downs that continued after that. But I guess not. Good for The Mars Volta, though… they’re certainly world-class musicians deserving of the $2,395,000 they just grossed in the matter of a few hours.

La Realidad De Los Sueños will come out on April 23 via the aforementioned Clouds Hill label. If you want to keep checking back just in case more copies magically become available you can do so here.

Now excuse me, I think I’ll go crank De-Loused as my morning listening.

Check out the funky new track from every hipster’s favorite band.

An entire album of early recordings that would later become ‘De-Loused in the Comatorium’ is coming out in April.

Includes scenes from This is Spinal Tap, Wayne’s World, Bohemian Rhapsody, and more.