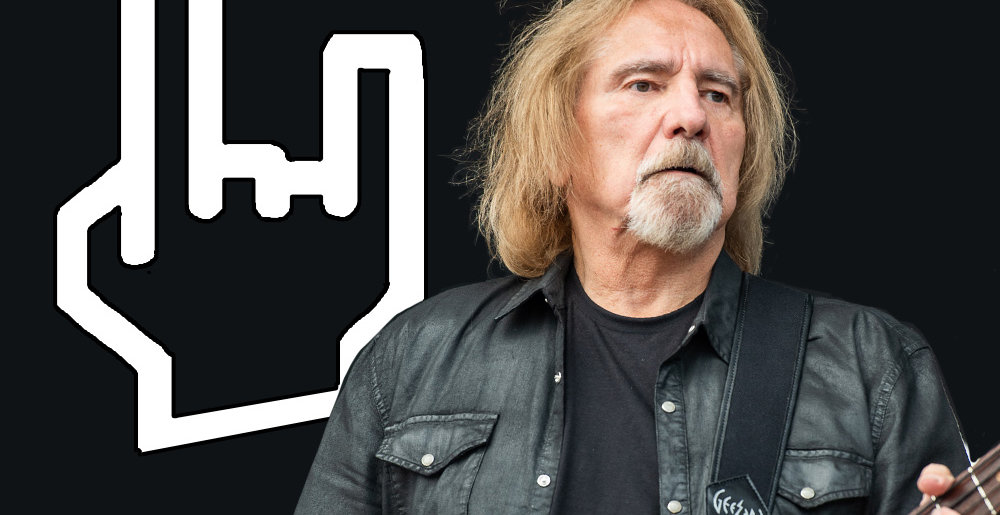 Approximately 176 years ago, the entire metal community voted and agreed to credit Ronnie James Dio (or, more accurately, Ronnie James Dio’s grandmother) with the creation of the devil horns we all so love to throw in the air at shows. Gene Simmons has repeatedly tried to dispute those results, but nobody takes him seriously because he’s Gene Simmons, he’d take credit for the creation of bread and water if he could concoct an even mildly-persuasive argument.

Despite this, Black Sabbath bassist Geezer Butler, presumably having decided that his place in the metal history books isn’t prominent enough, has decided that now he deserves credit for introducing the hand sign into the metal lexicon.

While Butler admits that Dio “made [the horns] famous,” he contends that it was he, and not Ronnie grandma, who showed ’em to RJD in the first place.*

From a recent interview with Eddie Trunk:

“I always used to do it in the breakdown in the song ‘Black Sabbath’ — just before it goes into the fast part at the end, I’d do that sign to the audience. And on the first couple of Heaven and Hell tour shows, Ronnie was saying, ‘When I’m going on stage, everybody is doing the peace sign to me, and that’s an Ozzy [Osbourne] thing. I feel like I should be doing something back to them.’ He says, ‘What’s that sign that you do in ‘Black Sabbath’?’ And I showed him the devil horns sign. And he started doing it from there and made it famous.”

So, uh, how come Butler has never mentioned this before?

“I didn’t really think much of it. As I say, I’ve got pictures of me doing it in 1971. And it was just an alternative to Ozzy’s peace signs, I was doing it. And if you look at the [Beatles’] Yellow Submarine album cover, John Lennon’s cartoon character is doing it, in 1966 or whatever it was. So it’s an old sign. I was just doing it ’cause [English occultist] Aleister Crowley used to do it.”

Geezer continued by asserting that a beloved dead man who can’t defend himself was a plagiarist in general:

Geezer concluded by painting himself as a doormat, saying he never spoke to Dio about any of his “naughty” deeds other than the devil horns.

Look, I’m loathe to argue against any septuagenarian who still gets into bar fights, let alone one I admire as much as Butler. But he hasn’t presented a very compelling argument. I mean, the first known use of the (now extremely common) phrase “one foot in the grave” is from a play written in the 17th century. Dio did infamously sign a lot of stuff “Magic,” but I can’t find much evidence that Butler ever did. And do you know how many schools are named ‘Sacred Heart’?

There is this one photo of Butler throwing horns in 1971, and he’s certainly correct about the Yellow Submarine album cover, so I guess that’s something.

Still, I’m not quite buying this. You?

Discuss amongst yourselves in the comments section.

*Unless… is it possible Geezer Butler is Ronnie James Dio’s grandmother?!?!