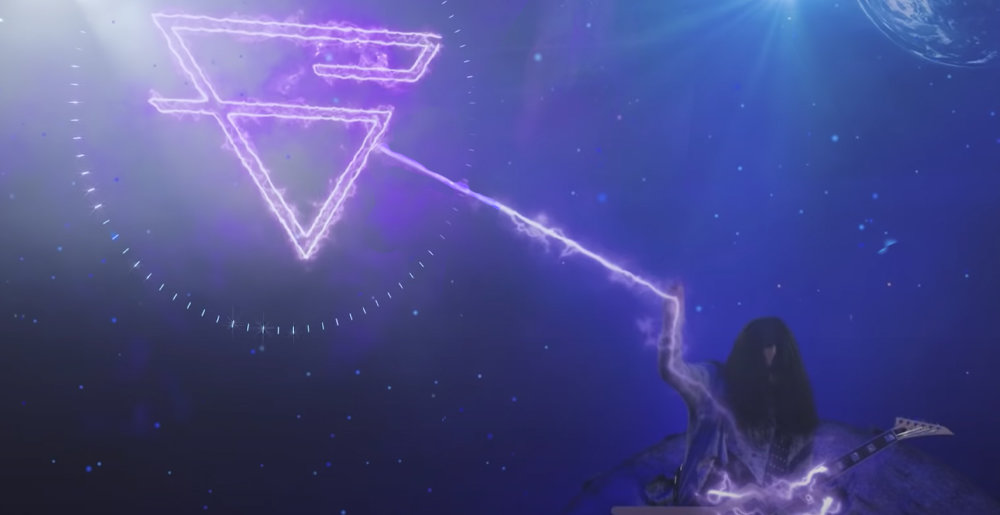 Gus G., former guitarist for Ozzy Osbourne and ongoing guitarist for Firewind, has released a new solo song, “Exosphere.” The instrumental song is a fun, catchy, early-90s-Shrapnel-Records-type jam (it’s not at all surprising to hear that Mr. G is one of the guitarists participating in an ongoing fundraiser for longtime Shrapnel staple Jason Becker). I highly recommend it, and am sad to say that it doesn’t arrive with any kind of album announcement (although the guitarist is said to be working on a new solo record).

The accompanying music video, meanwhile, is goofy as fuck, but in a really fun way. Like, he’s doing all these epic guitar hero poses in front of a fifth grader’s outer space Zoom background, and at one point, after finishing a note, he throws his pick hand in the air, and it shoots out a bolt of energy that forms his logo in the stars. At that point you’re either on board for this thing or not. I am 110% on board.

And while we’re on the topic, that Jason Becker fundraiser has a metric fuckton of cool guitarists involved besides just Gus G., including Marty Friedman, Alex Skolnick, Matt Heafy, John 5, John Petrucci, Herman Li, Tosin Abasi, Devin Townsend, Steve Vai, Kiko Loureiro, Michael Angelo Batio, Nita Strauss… y’know what? If there’s a guitarist you like, assume they’re involved. So many people are doing this thing, it’s actually kind of a diss at this point NOT to be invited to participate. Details are here.

Sponsored Links from Across the Internet
Show Comments
Related Articles
Cinemetal 0
Gus G. (Firewind, ex-Ozzy) Posts Video for “Into the Unknown”
October 12th, 2021 at 8:44am MetalSucks

His new album, ‘Quantum Leap,’ is out October 8 on AFM.

Metal Sucks Greatest Hits
0 -
The Top Ten YARLERS of All Time
0 -
Just in Time for Passover: Big Four Yarmulkes?!?!
0 -
This Very Fat Cat is The Best at Metal Drums
0 -
Etienne Sin: What the Actual Fuck
2510 -
Rose Funeral: The Uno Incident?
0 -
L.A. Band Threatin Faked a Fanbase To Land a European Tour No One Attended