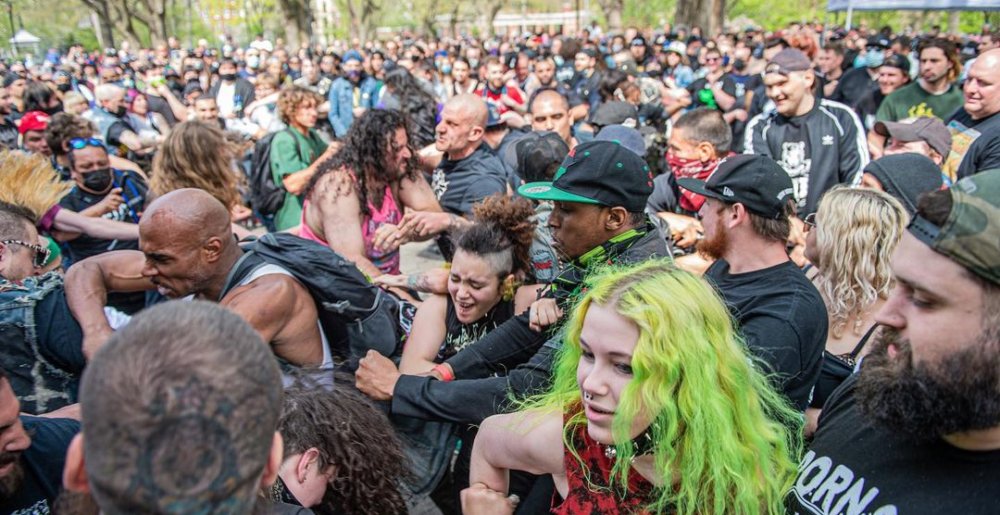 On Saturday, April 24, several hardcore bands performed in New York City’s Tompkins Square Park to an audience reported to be between 2,000 and 3,000 people, likely the largest concert to take place in the city since early March of 2020. Photos and videos of the show that have been circulating online show many attendees openly flouting Covid-19 safety regulations by ignoring social distancing and masking mandates as they mosh up front, sparking an outcry throughout NYC and the heavy music community as a whole.

Now the NYC Parks Department, which had jurisdiction over the event, is investigating the matter. Further, a future hardcore concert booked in the park in May is now in jeopardy.

The concert was put together by Black N Blue Productions, best known for This Is Hardcore Fest — which itself ran into criticism for attempting to violate Covid-19 guidelines last summer — and featured performances by Madball, Murphy’s Law, Bloodclot and The Captures at the park, which has long been a bastion for NYC hardcore culture. The show was a benefit for the New York City Firefighters Burn Foundation, and while admission was free, attendees were encouraged to donate.

A Parks Department spokesperson told Gothamist, “This matter is actively being investigated as the permit application filed and agreement appear to have been violated—future permits are in jeopardy.” Those “future permits” may refer to a May 8 show scheduled in Tompkins Square Park that’s set to feature Antidote NYHC, Kings Never Die, and the Last Stand.

Adding more fuel to the fire, ex-SSD frontman David “Springa” Spring, drew ire for wearing a “BLACK FLAG MATTERS” shirt while on stage with Murphy’s Law, striking many as tone deaf in the wake of the recent Derek Chauvin ruling and ongoing violence against Black Americans by police.

New York State law currently allows for outdoor venues to operate at 20% capacity — and a maximum of 500 people — with mandatory masking and social distancing. Those requirements were openly ignored at the park, which does not have a gated entryway during operating hours and does not have adequate parks staff to surveil a large event, as hundreds of maskless folks can be seen moshing in front of the stage.

Sponsored Links from Across the Internet
Show Comments
Related Articles
News 0
Court Rules in Favor of Cro-Mags Founder Harley Flanagan in Dispute Over the Band’s Name
October 9th, 2022 at 9:00am Mandy Scythe

Former Cro-Mags vocalist John Joseph is banned from using any version of the name.

Breaking the Law 0
Harley Flanagan Sues John Joseph Over Use of Cro-Mags Name at NYC Show
June 8th, 2022 at 11:39am Em Shadows

Metal Sucks Greatest Hits
0 -
Twelve Reasons Babymetal are the Single Best Thing to Happen to Metal in the Past Decade
0 -
West Texas A&M University Launches Course in Metal Lyrics
0 -
Editorial: Your Dead Metal Heroes Were No Angels
0 -
Debunking the Myth that Guitar Hero Made Dragonforce
0 -
The formula 4 good music: Generic, but with a gimmick (*please read*)
0 -
Slipknot’s Corey Taylor Shares Photo of “Post-Gig Make-Up Debacle” Beneath His Mask