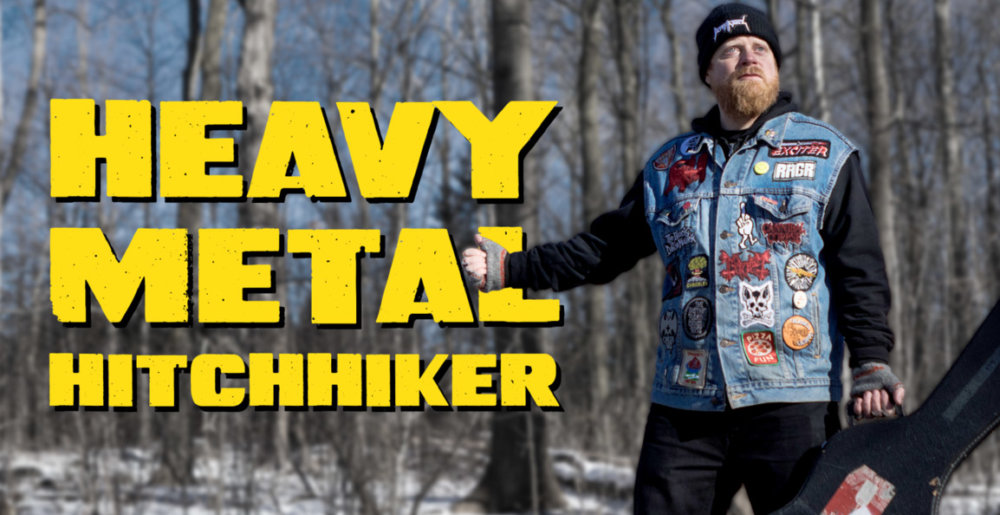 Heavy Metal Hitchhiker, the new series from BangerTV, is now four episodes deep into its eight episode run, providing some much-needed levity and heavy metal entertainment in these weary and concert-less times.

Brought to you by Sam Dunn, the man behind the iconic documentary, Metal: A Headbanger’s Journey (and other excellent productions since), the series follows… well, a heavy metal hitchhiker! Here’s the synopsis:

“This action-packed comedy series follows a day in the life of Mitch, a heavy metal-loving gas station attendant, who stumbles upon an abandoned guitar that belongs to his favourite band, RÄGR. In a moment of happenstance, Mitch realizes that he must follow in his father’s roadie-shaped footsteps and return the six-stringed axe to the band in time for their headlining concert. Without money or wheels, Mitch’s only option is to hitchhike. He’s got 10 hours to travel 247 kilometers to fulfill his destiny.”

The series premiered on April 20 (4/20, maaaaan!) with three episodes released since. At between six and eight minutes each, they’re the perfect length for internet attention spans (my own included), meaning you can knock out the entire first half of the series in just 30 minutes.

You can watch the first four episodes on Banger’s YouTube channel or below!

Upcoming Bullsh*t 0
Metal: A Headbangers Journey Creators Tease BangerTV… But What is It?
September 16th, 2015 at 1:30pm Vince Neilstein

Is a new metal TV channel of some sort on the horizon?

Metal Sucks Greatest Hits
0 -
Rammstein Members Kiss During Moscow Show, Violating Russia’s Anti-LGBTQ Laws
1,3240 -
Wes Borland: Still Cool In Jakarta
0 -
Joey Jordison Claims He Was Fired from Slipknot Via a Singing Telegram
0 -
Having a Rough Day? Try Hatebreed Motivational Posters!
0 -
Which Bands are “The Big Four of Death Metal”???
0 -
I Watched Rock of Ages so You Don’t Have To