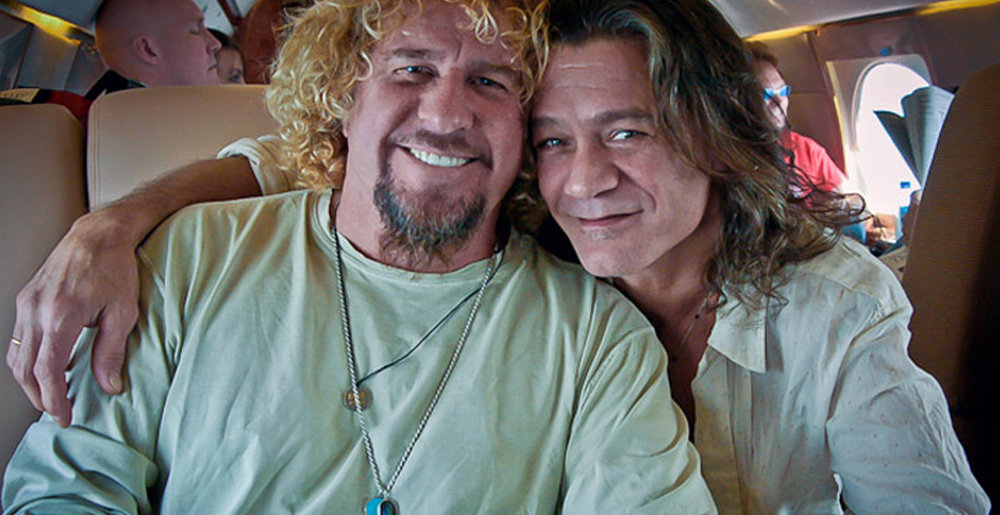 Van Halen fans were relieved to hear that Eddie Van Halen and Sammy Hagar made up in the months prior to Eddie’s death last October after years of an infamously contentious relationship. Knowing that Eddie’s health had taken a turn for the worse, Hagar reached out and the two rekindled their friendship.

Now Hagar has spoken in detail about how that came to pass thanks to comedian George Lopez and what it was like to reconnect with his old pal, as well as sharing his final texts with Eddie.

Speaking on the New & Approved series on KLOS, Hagar said that previous efforts at making nice with Eddie had been rebuffed, but he was finally able to get in touch when Eddie was ill. He explained:

“It was just so awesome. ‘Cause I had reached out to Eddie on his birthday for a couple of years. New Year’s Day I would reach out to Eddie and Al both, and I’d say, ‘Hey, Happy New Year, guys. I hope you’re happy, and I hope this year’s good for you.’ I was really trying to be friends. I wasn’t looking to join the band. I wasn’t trying to put all that back together. Everyone probably took it that way. ‘Oh, yeah, he just wants to get back in the band.’ I did not wanna get back in the band. As much as I love that band… If you said to me today, [‘You can play] one last show with Eddie, Alex and Michael,’ one last show, [I would say], ‘Absolutely.’ That ain’t gonna happen. But at the time, I wasn’t looking to join the band. I like what I’m doing; I’m happy.

“I think it was about two years in a row I did that. And then once finally Eddie reached out and said “Thanks, man’ back on my Instagram. ‘Hey, thanks. Doing great,’ or whatever. ‘And a Happy New Year to you.’ And I went, ‘Oh. That was cool.’

“But then I reached out to Alex. I heard [Eddie] was sick, and I knew he was sick. But I started hearing bad things. So I reached out to Alex. He did not get back [to me]. I reached out to Matt, his right-hand man. No. I reached out even to [Van Halen’s manager] Irving Azoff, and [he said], ‘Give Al a call.’ So I said, ‘I don’t wanna bug Eddie. I don’t wanna call Eddie and have him tell me, ‘Fuck you, you asshole.” I’d go, ‘Oh, no. Not this again.’ So I wanted to talk with someone else first and see how he was doing and if he would be cool with me calling. Nobody’s calling me. Nobody’s calling me back. Nobody’s responded to my e-mails, no response to my texts.

“And we just had a real nice relationship for probably four or five months, and then, all of a sudden, he wasn’t returning the texts and he wasn’t returning my calls and I wasn’t getting no response for about a month. It was heartbreaking, ’cause I knew. And then one time I said, ‘Hey, dude. What the fuck? You didn’t give me no love.’ And he goes, ‘Man, I’ve been in the hospital.’ And I’m, like, ‘Oh, fuck.’ And then that was the last I heard [from] him.”

Hagar joined Van Halen in 1985, replacing David Lee Roth. He sang on four of the band’s chart-topping releases — 5150, OU812, For Unlawful Carnal Knowledge, and Balance — before splitting with the group in 1996. He re-joined the band in 2003, whereupon he recorded a trio of new tracks (“It’s About Time”, “Up for Breakfast”, and “Learning to See”) for the greatest hits compilation The Best of Both Worlds.

Last May, he predicted that there would be a Van Halen reunion when touring resumed after the pandemic.