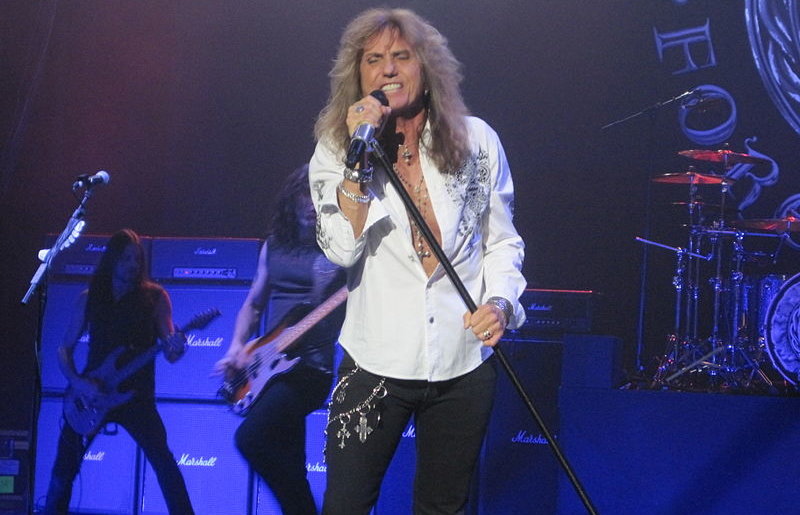 David Coverdale Says Whitesnake Could Continue With a New Singer

Whitesnake frontman David Coverdale has made his desire to pack it in well-known, first broaching the topic in an April 2020 interview in which the 68-year-old stated, with a wink and a nod, that 69 years old would be the appropriate age at which to retire. But that was before we knew how long the pandemic would drag on, and here we are most of the way to 2022 with a 70-year-old Coverdale who has yet to perform since.

Coverdale still plans on making Whitesnake’s next tour his last; that “farewell” run is set for May and June 2022 (with more dates likely on the way). And he means it. He recently told the Appetite for Distortion podcast, “make no mistake, this is the farewell tour,” citing the physical challenges of touring at his age, before adding, “A lot of my peers and contemporaries are on their 20th retirement tour. I don’t intend to plan that.” He also clarified that Whitesnake may continue as a studio project with him involved, and that it’s just touring that’ll be off the table.

But! Here’s the latest update. Speaking to host Mitch Lafon on The Jeremy White Show, Coverdale reiterated that Whitesnake could continue as a studio project, but introduced a new tidbit that the outfit may continue to tour with a different singer.

He began by explaining why he’s stepping down from touring before pivoting into the future possibility of the band playing shows without him:

“It’s not the performing that’s challenging for me. It’s the traveling. And I couldn’t travel any nicer, but it’s still very tiring on me. I’m working out like a motherf—er, so I have the energy. I’m energized by my band and the appreciative audiences. I think it’s going to be extraordinarily emotional at a lot of these shows. Because a lot of people have supported my work for 40, 50 years.

“But it’s just me saying goodbye to touring at that level. It’s an immense production putting a tour together. I have so many other Whitesnake projects I wanna do.

“It’s just going to be David Coverdale stepping down. There’s a possibility we can do something, that Whitesnake does continue to do something. But, other than in the studio, I won’t be participating.”

Whitesnake without Coverdale is like Zeppelin without Plant, a fact not lost on the man whose own Zeppelin-without-Plant project is infinitely less popular than either band. But the truth is that festivals will likely still pay top dollar for a Coverdale-less Whitesnake because band names sell tickets regardless. Just look at Foreigner or Journey or Stone Temple Pilots or any number of rock bands out there doing it without their iconic lead singers. What’s more, Coverdale may even still get a cut!

Who would step in if Whitesnake do decide to tour without Coverdale? That’s anyone’s guess, but Dino Jelusick, who recently joined the band as an auxiliary keyboard player, guitarist and backup singer, has as good a shot as anyone.

You can listen to a clip of the chat between Coverdale and Lafon below. Full episode here.

Whitesnake farewell tour dates (with Coverdale) set for 2022 so far:

Sponsored Links from Across the Internet
Show Comments
Related Articles
Worst Week Ever 0
Hagar vs. Roth, Mötley Crüe vs. L.A. Guns, and More Beefs You May Have Missed This Week
November 5th, 2021 at 5:00pm Axl Rosenberg

Symphonies of Sickness 0
Tawny Kitaen: Cause of Death Revealed
October 21st, 2021 at 9:18am Axl Rosenberg

The actress was only 59 years old when she died earlier this month.

Metal Sucks Greatest Hits
0 -
Phil Anselmo on Hearing the End of Pantera’s “Hollow” for the First Time: “I Was Floored…”
0 -
Today in Dream Theater Shirts: Metalhead Veterinarian Fired for Bestial*ty
0 -
I, For One, Welcome Our New Robot Overlords
0 -
Editorial: Your Dead Metal Heroes Were No Angels
0 -
Metal Musicians Reacts to Maroon 5’s Lame Super Bowl LIII Halftime Show
820 -
Rigged: Dream Theater’s Mike Mangini Takes You Through Every Piece of His Mega-Drumkit [Part 1]