Metal Sucks
Metal Sucks The Ten Essentials of Nu Metal Fashion Plan Ahead for Metal Festivals in 2022: What are Some of...
- Tweet SHARE
Enlarge
Br00tal-lists 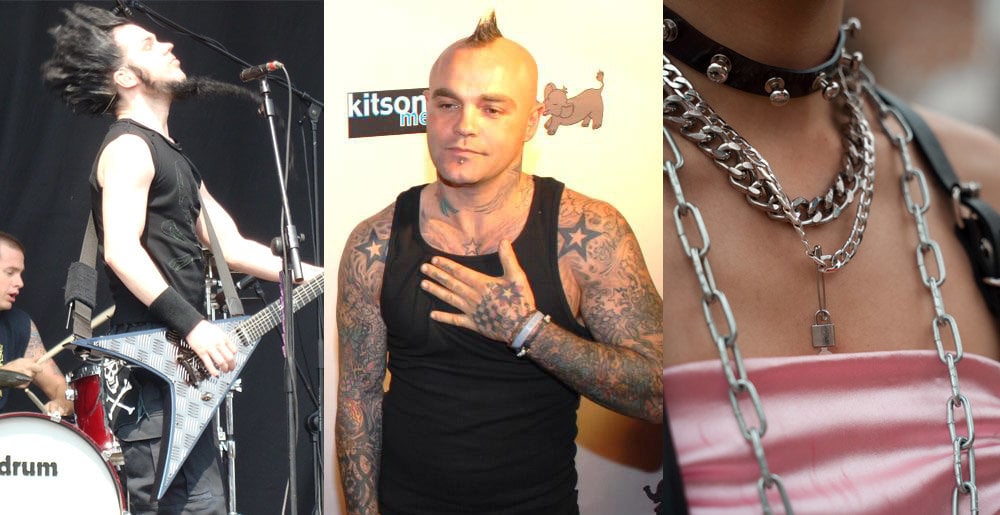 The following is a guest post by Noah Grossman.

Nu metal is back! So many people are finally coming around to the polarizing genre now that enough time has passed to finally admit that it was actually pretty fucking awesome.

Call it butt-rock, post-grunge or rap-rock. Give it any label you like to lessen the emotional toll it has on you to admit out loud that you actually kind of like that one Limp Bizkit song.

The truth is, nu metal never really died… it was just resting. But with artists like $uicideboy$, Bones, Ghostemane, Tallah and Tetrarch on the rise, the lines between metal, rap and grunge haven’t been this blurred since the initial rise of nu metal.

Today let’s take a step back from the music itself and look at the subculture. We know what nu metal sounded like… but what did nu metal look like?

Nothing screams ’90s quite like extra baggy jeans. In the late ’80s, rappers and break-dancers alike would wear baggy pants, but it wasn’t until the mid-to-late ’90s that other subcultures picked up on the trend, with skaters, punks and metalheads in particular taking a liking to making the jeans even baggier… and baggier… and baggier. Eventually JNCOs became one of the most iconic looks of the era, in particular in the nu metal scene.

Prior to the decade that birthed nu metal, body piercing never really took off in the West. Elayne Angel, a veteran body piercer, points to the music video for Aerosmith’s “Cryin’,” in which a young woman gets her belly button pierced, as the beginning of commonplace body modification among American youth. Is it any surprise that just under a year later, one of nu metal’s most well-known and influential acts would hit the scene with a lead singer that sported not one, not two, but three eyebrow rings? With the rise of the genre, and Korn in particular, came some of the most badass and aggressive looks of the ’90s.

I could have made an entire list on some of the most exemplary nu metal hairstyles, but I would be bound to miss out on some gems. Mohawks, dreadlocks, spikes, WAYNE. FUCKING. STATIC. While some were more outlandish than others, they all shared the one quality of outrageousness. The trend continued beyond the head, too, as some of nu metal’s most recognizable characters donned the sickest, craziest beards that have yet to be emulated within the realm of pop culture.

Red New York Yankees hat. That is all.

For all the (undeserved) flack Limp Bizkit got and continue to get from the popular press, the band’s frontman, Fred Durst, was one of the most charismatic and magnetic personalities of the ’90s. They say that all press is good press, and when a simple piece of sports memorabilia becomes synonymous with your name, that statement couldn’t be any more true.

Most everything in any era’s contemporary culture is either inspired by or appropriated from one that came before. Rappers like LL Cool J and punk bands like Sex Pistols wore chains long before nu metal was conceived, but the nu metallers of the ’90s — inspired by collaborations like the one between Public Enemy and Anthrax — took huge aesthetic influences from the genres they echo. Whether it’s necklaces, bracelets or wallet accessories, chains were commonplace among some of the genre’s biggest players and the individuals who listened to them.

While these two footwear and apparel powerhouse brands are by no means exclusive to the nu metal genre, the genre played a huge part in both brands’ domination of pop culture fashion in the ’90s. Korn’s 1996 smash, “A.D.I.D.A.S.,” introduced a legion of youths to not only a hilarious elementary acronym, but a music video that showed how cool being decked out in a full athletic tracksuit could look. For Vans, the overlapping of the skate and metal subcultures in the ’90s meant that skatewear, particularly skate shoes, were commonplace in the scene. Pair the cultural overlap with some sick fire decals, and Vans suit the territory just as well as an Adidas jacket.

We have the Hardy Boyz to thank for this one… and Christian… and Lita… and most attitude era professional wrestlers at some point. See-through clothing has crossed over into a number of different scenes throughout the years, but caught on the most in the edgier, more fringe communities. New wave, goth, and rave culture were all hotbeds of mesh clothing for both men and women, and unfortunately (or fortunately, depending on who you ask) nu metal may have been the last to model it so predominantly.

Question: What looks best when matched with ridiculously baggy jeans?

Throughout nu metal’s short run in the mainstream, it was always somewhat ingrained in other pop culture from the time. Movie series like The Matrix incorporated bands like Deftones and Unloco into their soundtracks, while pro wrestling events blared Limp Bizkit’s chart-topping hits. Nu metal was pop culture in the late ’90s in the same way that Marvel is pop culture today. If you wanted to rock a superhero shirt, you knew it would look the raddest in an oversized, nu metal-style cut. If it was a graphic tee and two sizes too big on you, you were probably doing something right.

Before I watched the Woodstock ‘99 DVD as a kid and saw Jonathan Davis yell “ARE YOU READY?!” at 400,000 people, I always associated kilts with Scottish dancing and drunken lullabies. Now when I see a kilt all I can think about is “da boom na da noom na namena.” Likewise, before I saw Kittie on MTV (and that same Woodstock ‘99 DVD), I always associated skirts with some kind of childlike innocence or a business casual office party. Nu metal was able to transform the meaning of certain items just by the allure of its art. I believe that’s part of the reason it’s so hated; it not only challenged the norms, it changed them, truly ahead of its time when people weren’t ready for it.

By the late ’90s, it wasn’t uncommon for popular musical artists to have tattoos. So instead of claiming that nu metal was integral to the mainstream acceptance of tattoos, I’m going to argue that not one scene came close to rocking ink as iconic. Chester Bennington’s arm flames, Shifty’s shoulder stars and Lynn Strait’s “insecure” stomach all reflect nu metal’s unapologetic radness.

You can argue all you want that these styles are all “outdated” or “cheesy,” but you would be missing the point. With so much to worry about in the world on a daily basis, I don’t know about you, but I choose cheesy over anxiety ten times out of ten. I think more people, particularly young people — musicians and fans alike — are realizing this too, and revisiting a genre that reflects a time of simplicity and carelessness. If a genre as “outdated,” as the critics say, can come back and appeal to a whole new generation of fans, why can’t the fashion that accompanied it return as well? Now excuse me while I boot up Halo 2 and download a P.O.D song from Limewire.