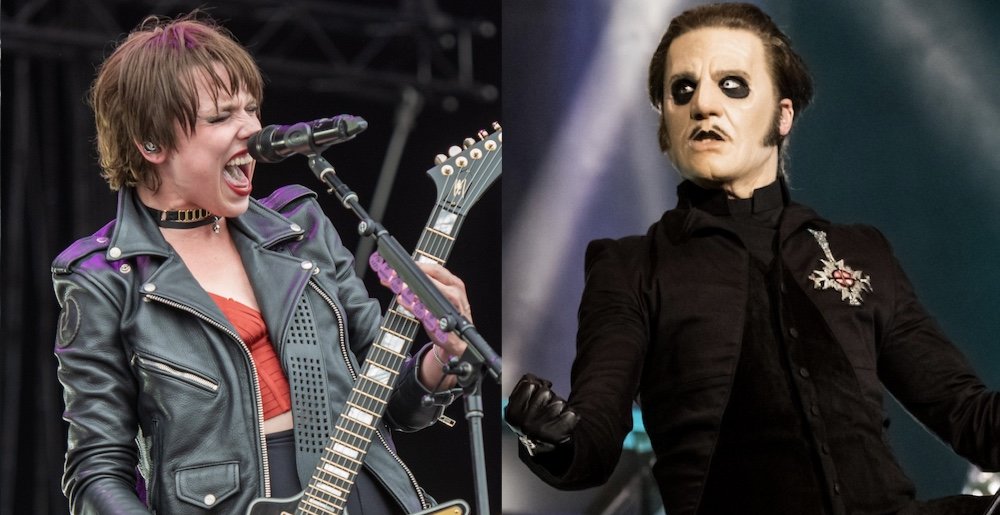 If you’re the type of person who hates on Ghost at every turn, you’re probably also the type of person who dislikes Halestorm (us? We shit on Ghost selectively, and we actually have a great fondness for Halestorm). And you’ll probably be unsurprised to learn that Halestorm vocalist Lzzy Hale is a big fan of Ghost’s Tobias Forge, both as a musician and as a thinker and band leader.

Speaking to Rock Sound (as transcribed by Blabbermouth), Hale went all in on her appreciation for Forge and his music:

“I love just the idea that you can have this heavy music that’s almost religious satire and it has this comedic aspect to it and a smile, but also if you’ve ever been to a Ghost concert, there are people that legit think they’re worshipping Satan…I just love all of those things together, in a nice little package, with this band.

“…[he’s] a genius. He’s such a smart man. And if you get to have a conversation [with him], he’s the most interesting person, I think, that I’ve ever met — very well spoken.

“What I admire about him… I don’t think I know any other band that does this, but Tobias always has a plan — he’s thinking about five years ahead, where he needs to be with this band and this project. I remember talking with Nick Raskulinecz, the same producer that just did our last record; he also did an album with Ghost. I remember him talking to me about how Tobias would show him all of these songs that were not meant for this specific record; they were meant for two records down the line. ‘Cause he has a timeline and he has the story already figured out and all of the production already figured out. And [Nick] was, like, ‘Oh, these are such great songs. We should record them.’ And Tobias was, like, ‘No. The world isn’t ready yet.’ [Laughs]

“[Tobias has] done the same thing with me in the past where he’s shown me some production drawings and little things that he’s gonna be doing a couple of years from now. And then a couple of years would go by and we would go and see [Ghost in concert], [and we would be,] like, ‘Oh, yeah. That was that thing he was talking about. That’s amazing.’ So just to be able to think like that I really admire, as far as just a career plan and a mission statement. Because I am completely not like that. I’ve tried the five-year-plan thing. And every time I make plans, we finally get to that point and something has changed, so I have to pivot and do something different. So I’m more of a living-in-the-now person. [Laughs] So we’re the complete opposite, me and Tobias, in that aspect, but I definitely admire him for the way that he is.”

You can check out the full interview below: