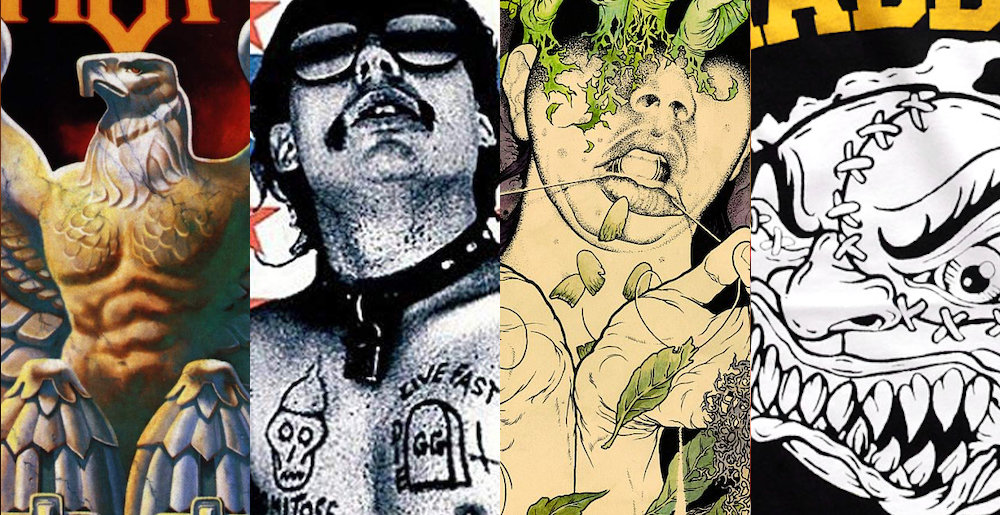 If you wear band shirts every day, you usually come up with a system. There are the shirts you wear around family (no gore, usually no rotten penises), the shirts you wear to festivals (rotten penises galore), and the lucky shirts that for some reason make you look really hot (oddly enough for me, it was a Morbid Angel Gateways… shirt). Not only that, but you have certain personal rules when it comes to wearing shirts. No album art, for example, or no designs off to one side of the chest…and sometimes, a hard no to specific bands, even if you like them.

We can’t entirely explain why some bands just feel like an absolute no-go for us when it comes to shirts. But like so much of metal, we find going with our guts is the smartest method, and for certain bands, our guts have put up a hard wall. So in order to parse out why exactly we feel this way, here are 13 examples of bands whose music we thoroughly enjoy, but whose shirts, for whatever reason, we are just not interested in…

When we imagine someone wearing a Manowar shirt, it’s tucked into their jeans. Manowar are the official band of dudes who consider themselves warriors in the army of metal proper, and that shit will always kind of rub us the wrong way. Besides, they love doing text and designs on the sleeves of tees, which we’ve never cared for (not longsleeves, but actual T-shirts). Obviously “Blood of My Enemies” is killer, but nah, we can’t rock their gear.

We love scathing black metal completists Naglfar, to be sure. But their logo is an onion. And every time I see that logo, I think, Oh, right, the logo of that awesome band. It looks like a fucking onion. This is your onion shirt. So yeah, while we dig the shit out of Naglfar, but onions make us cry. Maybe if they made a shirt that literally said, ‘HAIL THE ONION’ on the back, we’d go for it.

Simply put, I can’t pull it off. A Biohazard shirt looks great when it’s hanging off of a lanky, sweaty hardcore fan, or a huge-ass dude lunging his way through the pit. But I’m a bit of a teddy bear, and no matter how much Urban Discipline meant the world to me growing up, I’ll never not look like a wannabe tough guy rocking their shirt. Probably should just pass.

Listening to Gruesome is always awesome, because their music exists as a tribute to old-school Death. But maybe that’s why we’d never rock a Gruesome shirt – the tribute band thing. While Gruesome may rule, we’d rather just go get a Death Human shirt. Always down to put these guys on the stereo, but maybe not on our torsos.

Man, I don’t got time for all that fucking drama. Is my shirt of the real Batushka, or Bartushka? Is it a shirt of the right album or the poser one? Fuck all of that, I just want to rep a band with some cool-ass artwork. Do not engage.

Even if wearing a Vomitory shirt didn’t already involve a shirt with the word ‘vomit’ on it, that band go hard in the paint without nuance. Something about Cannibal Corpse’s morbid overkill makes their grotesqueness almost comical, but a shirt with the album title Raped In Their Own Blood just feels like too much at any family event. And yeah, also because it’d have ‘vomit’ on it.

The legacy of GG Allin is one of punk’s most volatile and vindicating. GG was the real deal, a monster among men. But his name is associated with one thing more than any other: deuce. Allin is most famous for pooping onstage at the drop of a hat, we’re not sure that’s a connection we want any punk-savvy person to make when he sees our shirt. Oh, hey, look. That guy’s down with getting shit all over him.

In our minds, a Madball shirt is just too loaded a garment for us. Hardcore allegiances, endless scene drama, the desire to throw a punch any time – these are what we associate with a Madball shirt nine times out of ten. Which is a shame, because their music is solid, and has influenced a legion of bands we love. That said, not sure we’re here for the type of attention that grimacing baseball on our shirt would garner us.

Too stark, too simple, and most of all, too pink. Much of what we love about Devil Master’s music is how snotty and sleazy it sounds; that guitar tone is fuckin’ delicious in part due to its flippant fuzz. But translate that to a shirt and it’s a simple image of some candles over their logo, all in the same color as Pepto Bismol. Nothing against these guys in the slightest – just not our thing.

I feel bad for their guitar tech.