Metal Sucks
Metal Sucks Meet Elizabeth, Who Are Like Gruesome But For the First... Beavis and Butt-Head Starring Odin and Thor: The Bifrost...
- Tweet SHARE
Enlarge
My Favorite... 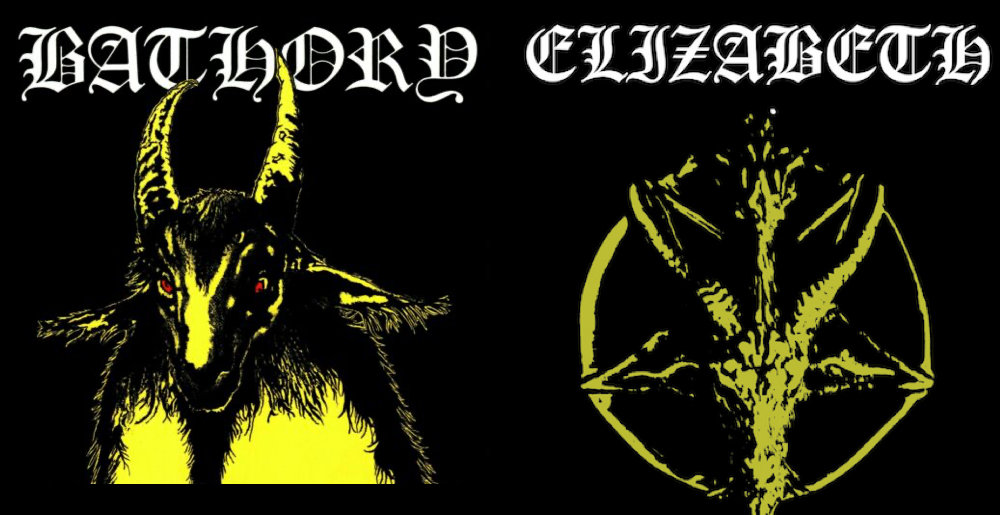 Meet Elizabeth, Who Are Like Gruesome But For the First Bathory Record

Something we really appreciate about death metal act Gruesome is that they don’t pussyfoot around their intentions. The band’s MO is 100% to pay homage to classic Death records, and they’re super open about that. There’s something charming about a band that says, We don’t want to be a tribute band proper, playing covers, but we just want to write songs in our idol’s vein. Now, another such outfit has emerged — Elizabeth, whose music is written and performed solely in homage to the first Bathory album.

How dedicated are Elizabeth to letting you know they’re here to stan Bathory’s 1984 self-titled debut? If you glance at their album cover below, you’ll see that it looks like the Canadian band used the eyedropper tool in Photoshop to steal the same shade of yellow from that album for their own goat-headed record sleeve. They also obviously found the Bathory font for their logo as well.

The album’s sound has all of the trappings of Quothon’s baby — icy buzzsaw guitars, snotty snarls, and a churlish pace that makes one think of old blues riffs matched with misanthropic hardcore. Hell, the one-man band’s only member, Jo Steel, describes Elizabeth like this:

“Not trying to be original, just trying to recreate the first BATHORY sound cause there wasn’t enough songs of that stuff released in the first place”

We have to admit, we respect this. There are a lot of bands out there right now blatantly biting off Bathory anyway, but selling themselves as the next evolution of pure satanic underground blah blah fuckin’ blah. We’d honestly rather hear a band just tell us, I like this record. I made an album very similar to it. It fucking rules.

Check out Elizabeth’s self-titled album below. Or just listen to the first Bathory album. Jo would probably be okay with that, too.

Cinemetal 0
Watch a New Video Interview with the Cast and Crew of Lords of Chaos
January 24th, 2018 at 2:36pm MetalSucks

The producers promise they’ve made “something much greater than just a heavy metal murder movie.”

Metal Sucks Greatest Hits
0 -
Has Moshing Turned Into a Form of Bullying?
2860 -
What is the Best Christian Metal/Hardcore Band???? [you’re moshing 4 Christ]
0 -
Editorial: Your Dead Metal Heroes Were No Angels
0 -
The formula 4 good music: Generic, but with a gimmick (*please read*)
0 -
Video: Dudes Rockin’ Out to Van Halen Meet David Lee Roth, Have No Idea Who He Is
0 -
Exclusive Interview: John Baizley of Baroness on the Bus Crash, Recovery and the Future