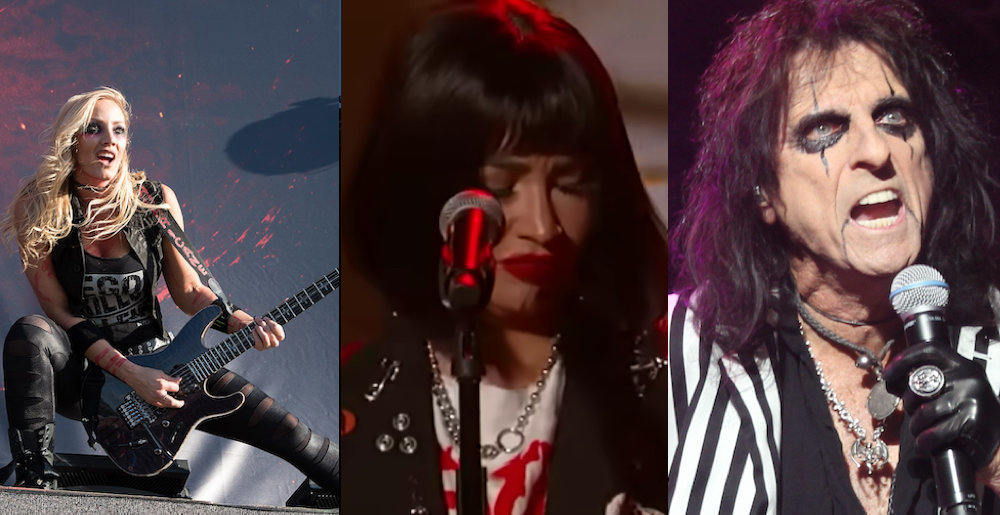 Nita Strauss on Leaving Alice Cooper to Play with Demi Lovato: ‘I Don’t Feel That I Left’

It was a pretty obvious level up for the guitarist but, in a new, extensive interview with Metal Hammer, Strauss clarified that the door is open for a potential return to Cooper’s band in the future.

“It’s an interesting thing that everyone’s picked up saying it’s a ‘departure’ but I don’t feel, necessarily, that I left. I took a step back and I’m stepping back from this upcoming tour but I don’t think anyone has ever used the word quitting or leaving outside of other people. When I had my last few shows with Alice, we had what Alice called a ‘Hiatus Dinner’ where he said ‘We wish you the best, we love you, you’re welcome back’. There’s no shutting of a door and changing of the guard, it’s just I’m taking a step back a little bit. Depending on what the schedule looks like next year, I may have the chance to come back, I may not. But it definitely doesn’t feel as final to me and to the people in Alice’s band and the inner circle as it has been portrayed out in the world.”

Strauss spoke highly of the king of shock rock, telling the publication that anyone who follows her in the role is lucky to be there. She also opened up about how she ended up scoring the gig with Lovato, telling Metal Hammer that Lovato is into rock and metal.

“So I actually got a text from Demi’s musical director when I was on the road with my solo band on the Black Label Society tour, and essentially what it said was what we all know now: Demi is a huge rock and metal fan. And Demi wants to go back to her routes and wants to put together an all-female rock band. She’s really one of the biggest stars in the world and she wants to take a step into our genre and this style of music that we love so much. When you get that text, that somebody wants to bring that type of music to the forefront, how do you say no? How do you turn down this opportunity to bring this style of music to so many more people? So I was thrilled to hear about it and I jumped at the opportunity.”

She also spoke about her role in Lovato’s band, referring to herself as the Slash to the singer’s Axl Rose.

“I think that every great rock front person needs a sidekick. And I think I have been a good sidekick to Alice Cooper over the past several years. But it’s a fun role to step into. Axl Rose needs a Slash, and that is sort of where I feel I fit into this. There is so much time in the new tour for that moment to happen where the rock star and the rock guitar player can be there together. It’s fun filling that role in a different capacity and the band is so good. The all-female band that Demi has on the road is so freaking good so it’s a pleasure to play with them and bring these songs to life.”

The guitarist also commented on the effect that she could have on girls seeing her play for the first time.

“I remember being a young guitar player and seeing videos of Jennifer Batten playing with Michael Jackson and going, ‘Oh my god, this is so cool’. There’s this badass, beautiful blonde strutting on the stage, whipping her hair, shredding her face off, and playing stuff that any guy would be lucky to go out and play with Jennifer’s incredible showmanship and impeccable technique. If I could give that experience with this next generation of fans, that will then go ‘Hey I want to go out and play guitar. I want to get a guitar for Christmas instead of a video game console’, then hopefully inspire that next generation of girls who hopefully will pick up the guitar and carry the torch. That’s what it’s all about in the end.”

Metal Sucks Greatest Hits
0 -
I Watched Rock of Ages so You Don’t Have To
0 -
Video: A Young Mr. Bungle Play Their High School Talent Show
0 -
France’s Got Talent, too: Beautiful French Girl Performs Heavy Metal Song on TV
0 -
Listen to Metallica’s “Nothing Else Matters” in a Major Scale
0 -
That Time Shaun Got Drunk and Filmed a Music Video with His Cat
0 -
The Secret 2 a Successful Career in Music