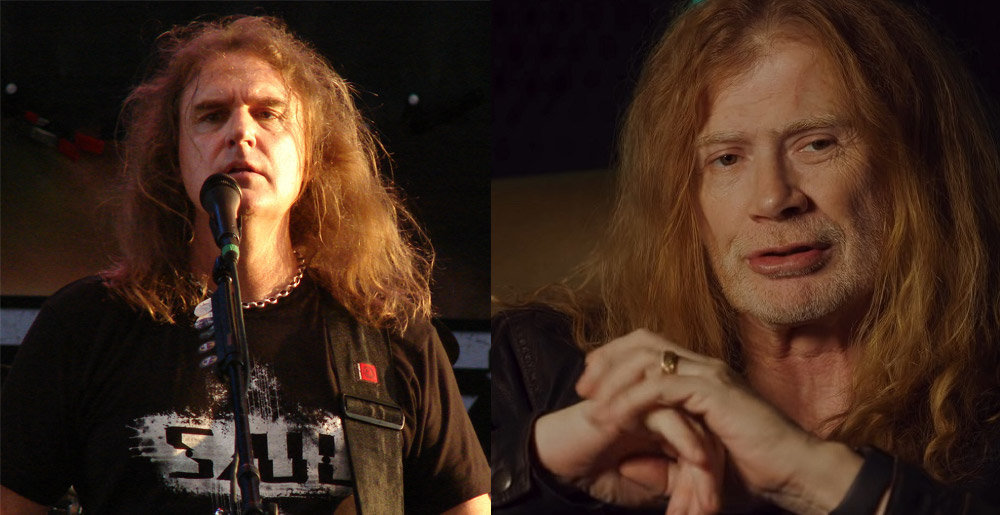 Mustaine on Firing Ellefson: “I Just Couldn’t Have That Around Us”

In a recent interview on Eddie Trunk‘s “Trunk Nation” SiriusXM show, Dave Mustaine discussed Megadeth‘s new album, The Sick, the Dying… and the Dead! As expected, the topic of firing longtime bassist David Ellefson amidst a sex scandal and recruiting Testament bassist Steve DiGiorgio to record his parts came up.

Mustaine starts off by saying he doesn’t really like talking about the situation anymore before answering, giving the interview a considered response that suggests more friction than just the sex scandal.

“I like telling the funny stories, but I really don’t like talking about that part of things, because the guy that I know and love was a different person.

“Making the change to Steve, we needed to do that; we needed to do that for so many reasons. On the outside looking in, there were a few people that were saying that I did the wrong thing, but I’m sorry — for my personal convictions, I just couldn’t have that around us. And even if it wasn’t true, I didn’t want that in my life.

“When Steve came in, he was a wonderful breath of fresh air because he could play the parts. And the parts that were on the record that were there… I did an interview recently and the girl says, ‘Why did you change Dave’s parts?’ And I thought, ‘You can’t be that stupid. I have to change the parts.’ I didn’t say that to her, but I was thinking that.”

Mustaine also says that the majority of the bass parts that DiGiorgio recorded weren’t Ellefson’s, saying they were rough tracks he laid down in the studio while writing guitars.

“First off, the majority of the bass on the record I played. And it’s demo tracks — we didn’t have all the record recorded yet. When I was in my studio with [engineer] Chris Rakestraw and I’m writing the guitar parts, I picked up the bass and plunked along with it. I mean, it wasn’t terrific, but it was the parts. So when anybody came in to record the parts, whether it was Steve or Dave, the parts were already written and recorded.”

MegaDave has nothing but positive things to say about the presence of DiGiorgio in the studio, explaining that he came at a crucial time for the band.

“The part about DiGiorgio coming in, it was cool because there was just so much bad going on at the time. It just seemed like the record was gonna keep getting delayed and delayed and delayed. But I believe there’s a spiritual vacuum in my life and that whenever things get really bad, there’s a breakthrough ready to happen. And I know that when things get bad like that, it’s kind of a challenge for the universe to see if I’m gonna stop living my life on the right side of things, if I’m gonna start trying to force things to happen again. And that’s not who I am anymore. I think right now we’re sitting on some of the best years ahead of us ever. I feel great. I think I’m playing really well. My relationships with most of the people in my life are really doing good. And I think that the band’s trajectory has just continued to go upward.”

Unfortunately MetalSucks doesn’t have a crystal ball that tells us what the future of Megadeth looks like, but the return of former bassist James LoMenzo makes the lineup one of the best the band has had in years.

Metal Sucks Greatest Hits
250 -
Worst Year Ever: All of Our 2011 Year-End Sh*t in One Place
0 -
‘Til Death Do Us Part: Metal + Hard Rock Musicians’ Wedding Portraits
0 -
Let’s Talk About Rammstein’s Controversial “Deutschland” Video
0 -
Why I’ve Stopped Buying Vinyl
0 -
It’s Official: There is Too Much Slayer Merchandise
0 -
Paul Di’Anno: Still a Winner