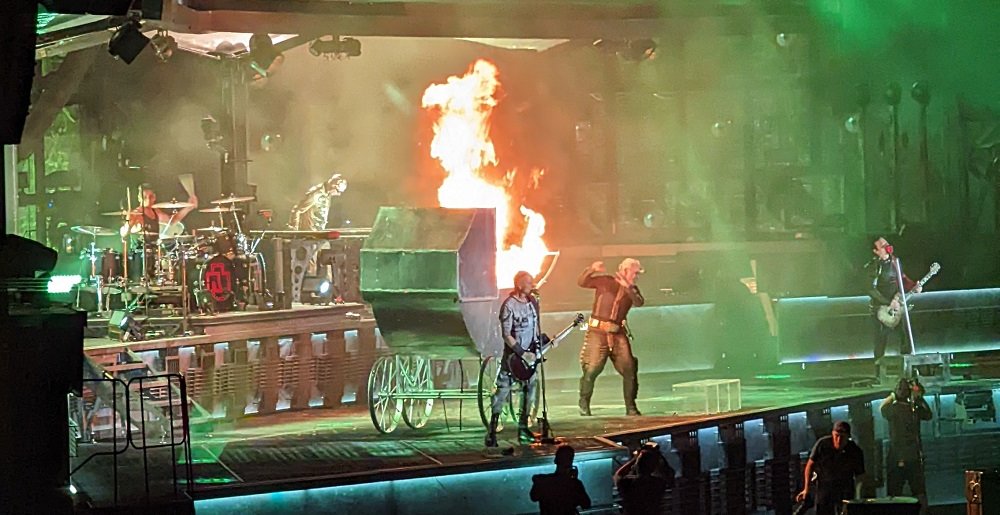 Show Review: Rammstein’s Explosive Show in Philly Was a Must-See

As I sit here in my apartment writing this, it’s midnight and my legs are sore, my ears are ringing, and I’m still slightly sticky with sweat from a mix of pyro and the hot August air. Yet even in this condition I know I’ve just witnessed something special. It’s that feeling of accomplishment you get for finally crossing a band off the “must see” list with a tinge of uncertainty if you’ll see them again.

Lincoln Financial Center was center stage for the fire and fury that only one band can really provide. Last night, I got to witness German industrial metal legends Rammstein burn it down in the City of Brotherly Love. (I haven’t seen Philly get this roasted since my New York Mets were in town!)

Now, I know what you’re expecting me to say: “The pyro was nuts.” “They played the hits.” “Hey, you can’t speak German.” And you’d be right — all those things are true and have been since the band first came to the U.S. in 1997.

The thing that stands out to me about the show, especially when set in a major NFL stadium, is just how grandiose Rammstein’s outings have gotten.

It’d been 10 years since they last played Philly and 12 years since their last New York City show. In that time, they released their self-titled album in 2019 and Zeit earlier this year. They played shows and major festivals all over the world, growing in size and scope. The result of all that time was a huge, bombastic affair that only a stadium with a seating capacity of nearly 68,000 people could hold.

Kicking off the show with new songs “Armee der Tristen” and “Zick Zack,” things seemed relatively tame, as they’re still newer additions to Rammstein’s repertoire. Things started to heat up both literally and figuratively with old classics “Links 2-3-4,” “Sehnsucht,” and “Mein Herz brennt.” Yet a surprise standout for me was the almost creepy “Puppe,” which sees a disturbing animatronic baby in a huge carriage get completely engulfed in flames.

More new songs followed, such as “Heirate mich,” “Zeit,” and “Deutschland,” each with their own unique stage dressing and performances. The main setlist ended with old bangers yet again, with “Sonne” proving to be one of the most fire-laden songs of the entire gig. Each time those flames hit, both from the stage and the 100 foot towers standing among the crowd, the temperature in the entire place had to have gone up at least 10 degrees for a quick moment. Each burst of flame or explosion damn near took the wind out of me.

Two encores later, including a beautiful version of “Engel” with pianists Duo Abélard played on a secondary stage among the crowd, and the show was done. The pyro was spent, the choreography was nailed, and magically, Rammstein played with fire and no one got burnt.

And that’s what makes Rammstein so unique as a concert experience. It’s equal parts metal show, Euro rave, and art installation. It’s a two and a half hour long bout of sensory overload that demands to be taken in the entire time.

But through all of that, something I noticed as tens of thousands of people flocked to Philly to see a German band play heavy music in their native language, was just how diverse the audience was.

This wasn’t just an industrial metal show. There were EDM scene kids. Regular Joe Six-packs and non-binary individuals were standing side by side in the merch line. Mothers and fathers brought their kids to show them the spectacle of a band they loved in their youth.

Language barrier be damned, Rammstein is the perfect example of how music can bring different cultures together without really having to understand each other. A simple riff, a marching rhythm, and a flair for the theatrics, and you can get anyone on board with enough fire and explosions.

If you haven’t seen Rammstein live before, or are even slightly on the fence, do it. We don’t know how much longer these guys are going to be kicking about, let alone how many more shows they have on our side of the globe.

There are still nine remaining North American tour dates left. You don’t want to miss out.

It’s gonna be a hot summer in Europe next year.