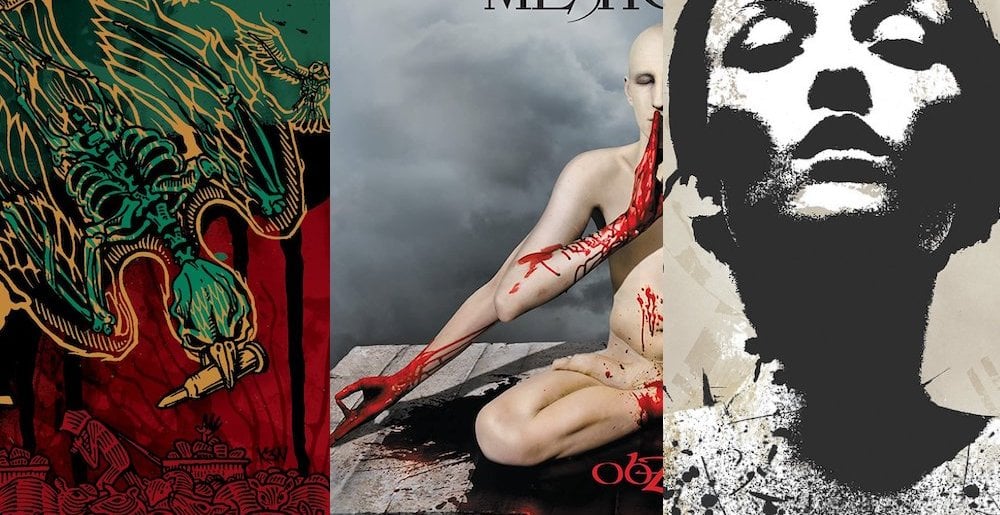 11 Metal Albums That Epitomize the Sound of the 2000s

Nostalgia is a hell of a drug, man. As the 2000s fade further and further into the rearview, it becomes clear that the decade was influential and important for the development of almost every style of heavy music. In the latest installment of our ongoing series examining the albums that best represent a decade, we’re digging into the 2000s: an era that solidified the fact that nü-metal was a mistake and introduced us to the full power of bands like Gojira and Mastodon.

Strap in, find your Hot Topic rewards card and reminisce on Ozzfests past.

You tell me that the opening riff to “Blood and Thunder” doesn’t get your blood pumping and I tell you that you’re a liar. The progressive sludge titans have done a lot and changed their sound quite a bit since their second album, but Leviathan is a musical peak that hasn’t been replicated by Mastodon—or any of their peers—since.

Do you feel that? It’s the memory of the first time you heard David Draiman‘s trademark “Oh, ah, ah, ah, ah” at the beginning of “Down With the Sickness” rushing back into your brain. Disturbed released their opening salvo in March of 2000, an accurate portrayal of what the mainstream of heavy music would look like for the rest of the decade. The cringe factor is a lot higher on Down with the Sickness than other Disturbed albums, but that’s the magic of the 2000s, baby!

Jane Doe is one of the great unifiers between hardcore and metal. On their fourth album, Converge became something far greater than the sum of their parts, pairing raw emotion and heartbreak with the chaoscore established on Petitioning the Empty Sky and When Forever Comes Crashing. Singer Jacob Bannon‘s iconic cover art is probably one of the most-tattooed album covers in the hardcore and metal scenes. An important reminder that it’s okay to feel things while you mosh.

“He who makes a beast out of himself gets rid of the pain of being a man.”

If you’re a headbanger who was around for this period in metal, this quote from Dr. Samuel Johnson (and a bastardized version by Hunter S. Thompson) was probably your AIM away message. On City of Evil, metalcore unit Avenged Sevenfold proved they had hella “real” metal chops, ditching the screams and breakdowns for riffs on riffs, catchy choruses and blazing guitar solos. Synyster Gates and Zacky Vengeance perfectly understand the lead/rhythm guitarist dynamic on this record, perfectly backing vocalist M. Shadows‘ vocals, which leveled up significantly from the band’s previous album, Waking the Fallen.

We’ll give Meshuggah a pass for their influence on djent because ObZen is just a pulverizing, spine-disintegrating slab of heavy music. Polyrhythms!

Before the goddess’ name was associated with terrorism and televised beheadings, it was associated with California post-metal act Isis. Not just the warm tones and reverb-heavy vocals aged well; the album’s concept about the government’s role in a growing security state is a solemn reminder of the ills of technology and people who would abuse it. No singular band has had such an influence on the post-metal genre than Isis and Panopticon is their highest peak.

There were flashes of brilliance in Children of Bodom‘s music before but Hate Crew Deathroll is where it all really comes together. Opener “Needled 24/7” sets the mood: power metal influences, dueling guitars and keyboards and the late Alexi Laiho’s theatrical vocal performance. Laiho’s appearances on the cover of magazines like Guitar World are undoubtedly responsible for birthing legions of shredders.

Progressive groove titans Gojira first hit their stride on From Mars to Sirius, their 2005 album. Featuring themes about environmentalism with an emphasis on whales, the Frenchmen cranked out some of the heaviest tunes on this planet or Mars.

If Gojira are titans, Lamb of God are, um, gods of groove. Featuring Lamb of God staples like “Now You’ve Got Something to Die For,” “Laid to Rest,” “Omerta” and “Hourglass,” Ashes of the Wake created a slew of groove metal clones, few of whom could live up to the lofty standard set on this record.

The sounds of winter live on The Mantle, the second album by US black metal/neofolk/post-something institution Agalloch. The album is deeply revered and with good reason. For an hour and eight minutes, Agalloch hypnotize the listener with enchanting melodies, freezing riffs and vocals that sound like secrets being whispered from a wise man’s mouth to your ears.

Is Dopethrone the most important doom record since Paranoid? Probably. Electric Wizard had already established themselves with two albums, but Dopethrone is like a blueprint for what was to come: thick, syrupy guitar tones; desperate-sounding vocals buried a little further into the mix; and themes of barbarians and warriors, horror and just general despair. Dopethrone is what it sounds like when you drop out of life, bong in hand, to play doom metal.