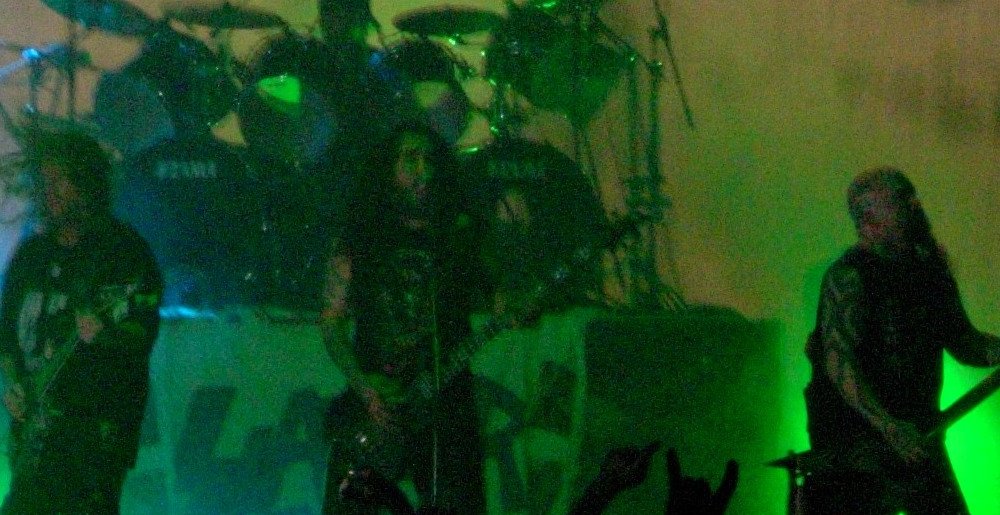 Slayer circa 2006 by Gabriele via Wikimedia Commons

Tour Support: The 10 Best Slayer Tours of All Time

As a wise man once said: “SLAAAAAAAAAAAYER!”

Metallica might be the largest of the Big Four and Megadeth might have the most bitter frontman, but Slayer have the most-dedicated fans, many of whom have seen the band a dozen times or more. And while we never tired of hearing “Angel of Death” and “War Ensemble” live, Slayer tours usually also came with the opportunity to see other ripping bands, be it up-and-comers or legends.

Slayer called it quits in 2019, but we’ll never grow tired of reminiscing about seeing them live. To aid in a little reminiscing of your own, we compiled a list of the ten best Slayer tours of all time. Competition was stiff, but these are the ones that stand out the most.

Until the Big Four tour, Clash of the Titans was arguably the biggest thrash gathering of all time. Taking part in two legs, Slayer and Megadeth decimated Europe with Testament and Suicidal Tendencies in the fall of 1990. Leg two brought the noise to North America, where ‘Deth and Slayer hooked up with Anthrax for a tri-headliner with opener Alice in Chains. Literally something for everyone on this tour.

Talk about an ambitious fucking tour. Slipknot, Slayer, Sepultura, Mudvayne, Sevendust, Hed PE, Nashville Pussy, Downset, Hatebreed and a bunch of nü metal acts that the world has blessedly forgotten—plus a slew of tattoo artists—hit the road for a month in the summer of 2000. Oh, and Metallica, Stone Temple Pilots, Dope and Lamb of God played select dates. We can only imagine that playing a month of shows with Slipknot is why Slayer decided to go nü metal for their post-Diabolus redemption arc.

Slipknot and Slayer with Mastodon and Hatebreed

Slayer and the ‘Knot crossed paths once again as the Iowa nonet continued their warpath to heavy music domination. This time, they brought out rising stars Mastodon—hot off their flawless second album Leviathan—and metallic hardcore crew Hatebreed, who had begun to break out in the wake of Tattoo the Earth.

Another tour that should require almost no explanation as to why it rules, the third leg of the South of Heaven tour featured English gods Mötorhead and New Jersey’s finest, Overkill, for a legendary month and a half. It’s probably a safe assumption that anyone in attendance at any date on this tour suffered permanent hearing damage.

1999 is one of the best Ozzfest years for the presence of young Slipknot alone. With their debut album just released, the jumpsuit-wearing clowns quickly carved out a reputation for an insane live show. Add in a finally-reunited Black Sabbath, Rob Zombie touring Hellbilly Deluxe, Slayer, Deftones, Primus, Godsmack, Fear Factory, Static-X and a a half-dozen other bands for an Ozzfest to remember.

On their first European tour, Slayer brought the heat with a Reign in Blood-heavy set, touring on the just-released album. Starting with “Raining Blood” and ripping through a seventeen-song set that ended with “Chemical Warfare,” the Reign in Pain tour was an emphatic statement that Slayer were here to reign for a long, long time.

Do I even need to write a paragraph about why this tour just totally fucking rules? Look at the bands and look at the year. If you don’t think Ultimate Revenge is one of the best tours of all time in general, leave the hall, poser.

Shortly after Slayer recorded the notorious Still Reigning live album/DVD combo, they set out on their second Jägermeister Music Tour headliner. While both lineups are stacked—the fall 2003 run features Slayer, Hatebreed and Arch Enemy—the Fall 2004 tour captures a diverse bill with all three bands operating at full capacity. Taking place right after Slipknot and Mastodon got off of the Unholy Alliance tour, the duo joined the Howard Jones-fronted Killswitch Engage for nearly two more months on the road.

The thrash legends really went out on a high note, crushing an extensive world tour to say goodbye for the last time. Different bands opened different legs of the tour, but it was pretty much guaranteed that Slayer—with Exodus guitarist Gary Holt—would be surrounded by the best talent the old guard had to offer. Few bands can truly go out on top, but Slayer’s farewell tour allowed them to do just that.