Metal Sucks
Metal Sucks Revel in Goatwhore’s Special Brand of Blasphemy with... Powerwolf Releases Single and Video for “My Will Be...
- Tweet SHARE
Enlarge
New Stuff 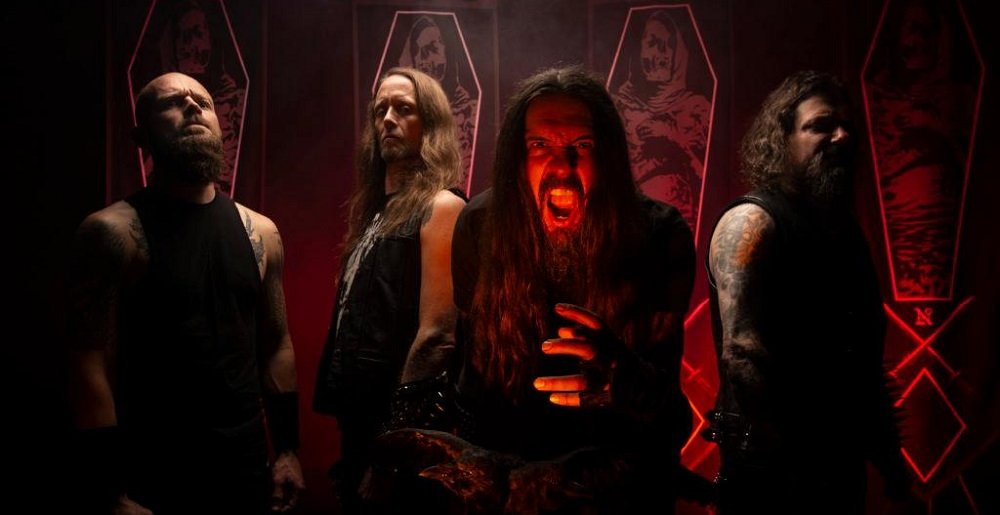 Let’s just get this out of the way. Goatwhore‘s latest release Angels Hung from the Arches of Heaven is a certified, grade-A banger. It’s absolutely something that should be in your rotation as one of the better releases of 2022. Full stop.

But if you’re still not convinced that last Friday’s drop from the blackened death thrash quartet was killer, the band unleashed its music video and single for the album’s title track.

Just as it does on the album, the video is a straight up ripper befitting of a band that’s been doing this shit for a quarter of a century. It’s ruthless. It’s punishing. It’s fucking badass.

Speaking about the song in question, vocalist Louis B. Falgoust II said the title track in question “ventured into an idea of emotional despondency within older texts and writings, feeling like several of these writings missed an element of human nature/emotion.”

“The basic laws and rules guided by simple aspects of good and evil and the emotional/mental journey in which people would have to traverse them. Life is simple, but very complex when coming to the relationships of numerous people together and their paths crossing.

“The idea was spawned from delving into my own idea behind the relationship of Judas and Jesus, reading various writings on the topic, from the basic ones we all have heard to the forbidden concepts like the Gospels Of Judas. It’s also about the idea of doing something you may think is positive or beneficial, but it only ends up putting you in a more negative foundation, and this abstraction can send a person into a very dark place. Life around you begins to crumble and the thoughts become more askew. The title is more of a metaphor embracing this idea.”

Be sure to give this track a listen and check out the visually striking video, directed by David Brodsky, below.

Goatwhore, Angels Hung from the Arches Of Heaven

It’s the latest single from the Iowa band.

New Stuff 0
Creepy Dudes Get Theirs in the Cinnamon Babe Video for “Loose”
October 31st, 2022 at 11:51am Hesher Keenan

Metal Sucks Greatest Hits
0 -
New Candidate for Most Metal Wedding Ever: Bride and Groom Shred Down the Aisle
0 -
The 110% Totally True Confessions of a Left-Wing Conspirator
1480 -
Being in a Band is for Losers [Scientific Proof]
0 -
Navy SEAL Team Six Member: “I Wore My Demon Hunter Patch When I Blasted Osama bin Laden”
0 -
Video: Vocalist Performs Ten Styles of Metal, Complete with Appropriately Silly Lyrics
0 -
Why I’ve Stopped Buying Vinyl