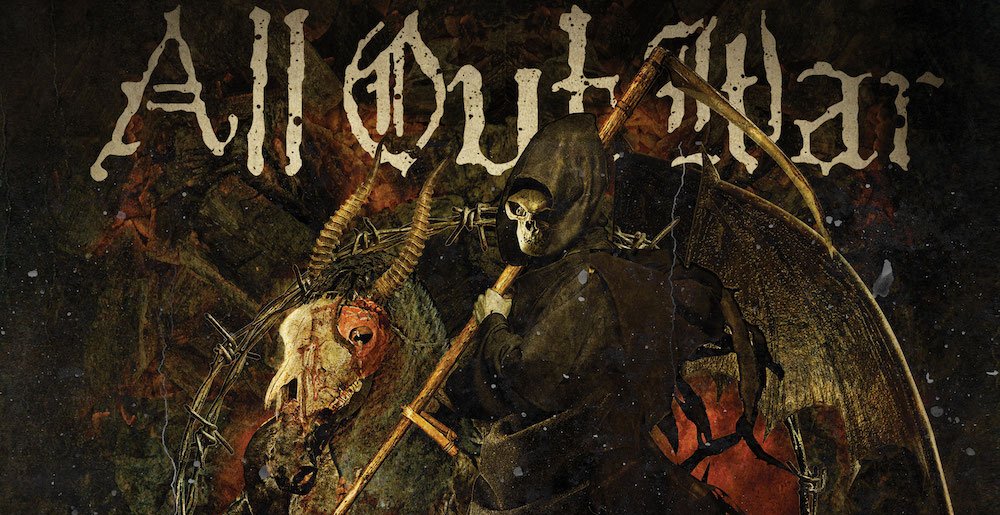 Good news from New York City: metallic hardcore legends All Out War are back with album number eight, Celestial Rot, and it is nothing shy of a total assbeater. The lead single, “Glorious Devastation,” has a blackened layer that covers All Out War’s core sound of Slayer meets Cro-Mags, vocalist Mike Score‘s voice somewhere between a howl and a drill sergeant.

Celestial Rot is lined up for a February 3 release on Translation Loss (special editions through Decibel and Revelation Records). I know we haven’t even gotten around to end-of-year lists for 2022 yet, but I’m telling you: Celestial Rot is an easy album-of-the-year contender for 2023, assuming you like riffs or breakdowns, preferably both.

From the PR wire:

“New York’s All Out War are one of the true originators of modern metalcore as we know it, not only predating the genre term, but defying, combining and defining what hardcore and metal should sound like for almost 30 years. Revolutionary in their approach, All Out War fused the speed and aggression of “Reign in Blood”-era Slayer with the ferocity and attitude of “Age of Quarrel” -era Cro-Mags.  Two styles that are vast in sound, but All Out War combines them to form an attack that is still unmatched. Add to the mix one of the most iconic voices in hardcore and metal, Mike Score’s unique vocal approach to aggressive music and introspective lyrics has helped keep All Out War light years ahead of their time and has never felt more necessary in today’s landscape.

“Celestial Rot” is the band’s eighth full length offering, containing ten tracks of pure aural devastation and offers up their most expansive release to date while reaffirming their position as one of the most powerful and aggressive bands in extreme music.  Never content with maintaining the status quo, All Out War constantly pushes the boundaries of extreme music with every release, this time around melding black metal and death metal influences to the mix while effortlessly maintaining their signature sound. “Celestial Rot” was recorded by Taras Apuzzo of All Out War, mixed and mastered by Erol Ulug at Bright Lights Studios (Teeth, Our Place of Worship is Silence, Rotting Out) and features the art of Alexandre Goulet (Despised Icon, End, Apes, WAKE, Fit for an Autopsy).

Listen to “Glorious Devastation” below.

Metal Sucks Greatest Hits
0 -
And Now, Here’s a Couple of Dudes Playing Slayer on Pre-School Instruments
0 -
Editorial: Your Dead Metal Heroes Were No Angels
0 -
Type O Negative’s Peter Steele Once Punched Chino Moreno In The Face for Inciting an Onstage Riot
0 -
Exclusive Interview: Damien Echols of The West Memphis Three on His Life After Death
0 -
A MetalSucks Exclusive: Return from The Graveyard — King Diamond on His Near-Death and New Life
660 -
KNEEL BEFORE THE POWER OF ELEPHANTS MARCHING RIFFS