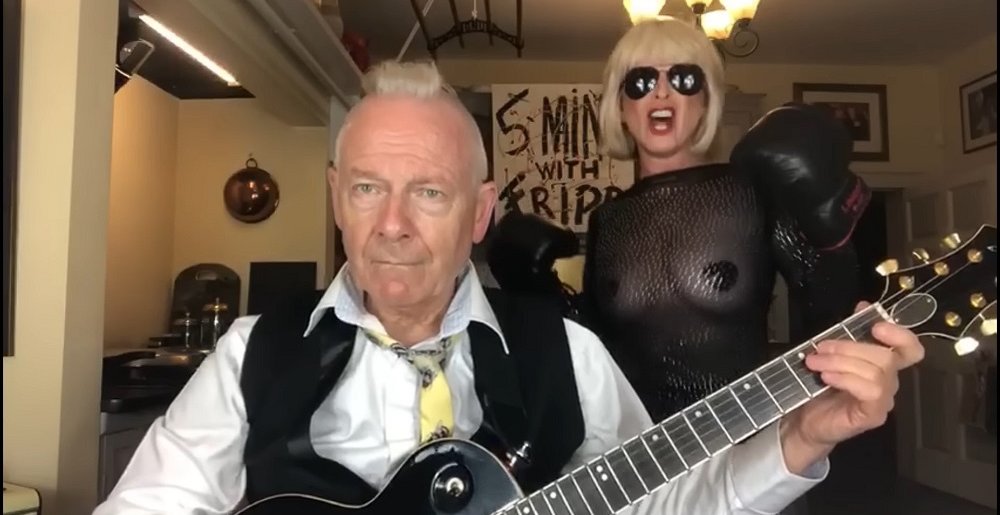 It’s been a few weeks since King Crimson guitarist Robert Fripp and his wife, actress and singer Toyah Wilcox have graced our page, but that doesn’t mean the couple haven’t continued putting out their quirky and sometimes risqué YouTube series Toyah & Robert’s Sunday Lunch. With more than 100 videos under their belt, their antics have been enjoyable for many, but a vocal portion of the audience (eg. our commenters) have met the clips with anger and vitriol.

While speaking with The Telegraph in support of the King Crimson documentary, In the Court of the Crimson King, Fripp recognized that some of the band’s fans hate his and his wife’s antics, but that’s not going to deter them, he said.

“At the beginning of lockdown, my wife handed me a tutu and a pair of her black tights and took me to the end of the garden and put on Tchaikovsky’s Swan Lake. My wife insists performers have a responsibility to lift people’s spirits in hard times. Do I respect that? My answer is yes, completely and utterly I do.

“We’re keenly aware of what people have experienced during lockdown. I mean, banged up in a small apartment while your mother’s dying and you can’t go to the funeral. My wife said to me, if all we’ve done in two years is help one person through their bad time, it’s all worth it. So I’m not sure if that meets a criteria of serving what is highest in music, but for me, it’s a real undertaking that I respect. And I am quite prepared to strap on a guitar and rock out to a classic riff in order to achieve it.

Why should he give a fuck indeed. What they’re doing online isn’t going to hurt anyone, which is why…..

SURPRISE, MOTHERFUCKERS! THIS IS NOW A TOYAH & ROBERT SUNDAY BRUNCH VIDEO POST. I WAS AWAY THIS PAST WEEKEND, BUT HERE IT IS ON A MONDAY AFTERNOON!

Released yesterday, this week’s video features Toyah on the kitchen furniture, rocking out to the 1993 Korn classic “Blind.” Which reminds us that the self-titled Korn album is almost 30 YEARS OLD. When the hell did that happen?!

Anyway, here’s the video and get mad about it if you want. Or don’t. Just let people enjoy their short time on this planet, if you can.