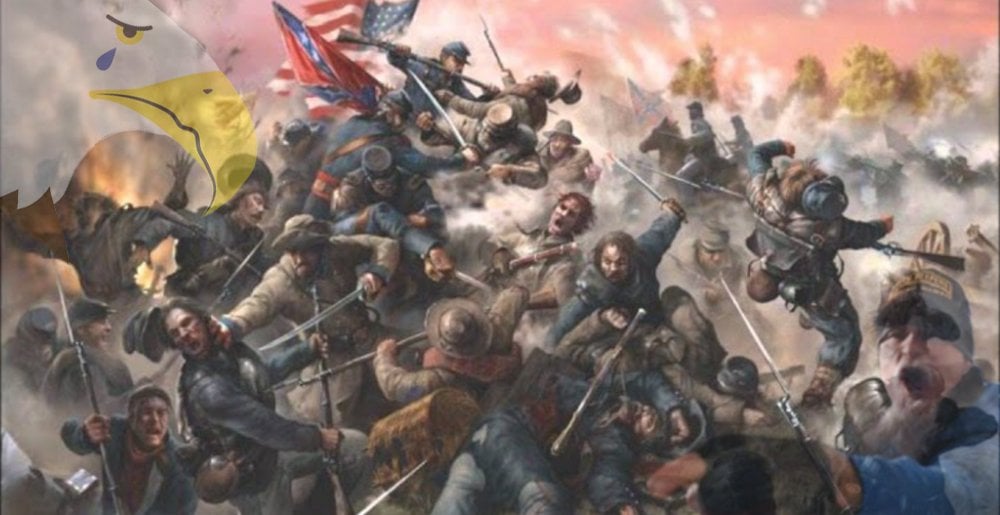 Songs to Listen to as American Democracy Dies

After months of insane rhetoric from both sides of the aisle, it’s finally election day. With scores of Americans heading to the polls that haven’t already cast their ballots, all that’s left to say now is “well, it’s been a good run America. So long, and thanks for all the fish.”

If you’re of a certain mindset, today’s midterm elections feel like the end of an era as one side believes it’s saving the country from “Communists that want to make your kids trans” while the other side thinks this will be “the last American election ever” if the other side gains control of Washington. Apparently it’s all or nothing. Do or die. Don’t pass Go and don’t collect $200.

And while you can point to a whole list of reasons why this all feels so pointless, I personally blame the January 6 insurrection as the tipping point. So to celebrate the apparent end of democracy, here’s a playlist that has absolutely no central theme to it all and has nothing to do with any disgraced fascist metal musicians.

What can be said about our national anthem that hasn’t already? Written by Francis Scott Key, it’s a huge middle finger to the Brits, effectively saying “suck it, you limey nerds. Your rockets’ red glare and bombs bursting in air did fuck all to our flag.” Extra points for stealing a British drinking song’s tune. I’m sure Jon Schaffer had this in his heart while he was threatening police with bear spray.

Though this song’s initially based on the Spanish Inquisition and the way it completely perverted the very religion it claimed to love and defend. It’s kinda like Jon Schaffer and all the other MAGA chuds on January 6 that claimed to love law enforcement and the Constitution, but beat up on both in the same day.

Iced Earth – “When the Eagle Cries”

When I think of songs that evoke the kind of sorrow I’d expect a real patriot to shed a tear to, “When the Eagle Cries” isn’t one of them. This is, however, the perfect “aw man, our countree is goin’ down da shitter” tune for the Big Mac guzzling LARPers like Jon Schaffer that perpetrated the biggest attack on democracy in the country’s history.

I’ll be honest here. There’s a bit and I have been trying to follow the bit, but there’s only so much Iced Earth I can stomach, especially knowing now how much of a traitorous piece of shit Jon Schaffer is. So let’s just say this song represents the scores of pasty white failures that couldn’t even get a room of old people to stop voting. Way to suck, nerds.

Iced Earth – “Disciples of the Lie”

Had El Trumpito not spent weeks and months pumping up a conspiracy theory that the election was rigged, nine people (including five law enforcement officers) would still be alive. All for a stupid fucking lie that we’re still dealing with now. Did you know that over 300 candidates in today’s election believe the 2020 election was stolen? In the words of Metallica, “we’re so fucked.”

This one’s a pretty obvious choice. With both sides believing they’re voting to save freedom in the country, could it be that it’s actually terminally ill, on life support, and about to have the plug pulled anyway? Who knows? What I do know was when Jon Schaffer was charged with obstruction of an official proceeding of Congress, and trespassing on restricted grounds of the Capitol while armed with a deadly or dangerous weapon, he probably literally saw the ghost of his freedom drift away.

Iced Earth – “My Own Savior”

Like most songs by this band, “My Own Savior” probably has to do with some eternal struggle or whatever, but I’m sure all the people that got arrested, charged, and agreed to plea deals would call themselves “My Own Savior.” Especially Jon Schaffer, whose involvement in the democracy damaging insurrection led to him entering a plea agreement where he must rat on his fellow Oathkeepers if he ever wants to avoid the inside of a jail cell.

This one’s easy. If you were convinced to literally storm the center of the American federal government and thought you weren’t ever going to be caught, you were brainwashed. I mean, come on — DC is one of the most heavily surveilled places on the planet. How dumb do you have to be, Jon?

With all the talk about society collapsing and seething anger and whatnot, this song perfectly encapsulates the events of January 6 and the continued rage that boils over across the entire political spectrum in the country. Feels like we’ve had years of rage and who knows if there’s ever going to be a return from that.

The final song of a three part series based on the Battle of Gettysburg. You know, that major Civil War battle? Some say we might be headed to another one of those, so maybe listening to this could be considered preparation? Either way, here’s hoping that January 6 was the high water mark for this country’s insanity. I also can’t help but imagine this song was on Jon Schaffer’s mind as he briefly ran from the feds earlier this year. Especially the part at the end where Tim “Ripper” Owens wailed “It’s all my fault/The blood is on my hands.”

Sponsored Links from Across the Internet
Show Comments
Related Articles
Br00tal-lists 0
13 Songs That Hellraiser’s Pinhead Would Rock Out To
October 4th, 2022 at 12:23pm Ryan Dyer

Get your leather gear in order. Things are about to get hellish.

Metal Sucks Greatest Hits
0 -
Listen to Metallica’s “Nothing Else Matters” in a Major Scale
0 -
Let’s Talk About Rammstein’s Controversial “Deutschland” Video
0 -
Students at British School Sing Iron Maiden’s “Flight of Icarus”
0 -
A Sh*tstain on the Ass of the Universe, #28: Lie or Liar
0 -
The Top Ten YARLERS of All Time
0 -
Metallica’s St. Anger Was Released Ten Years Ago Today