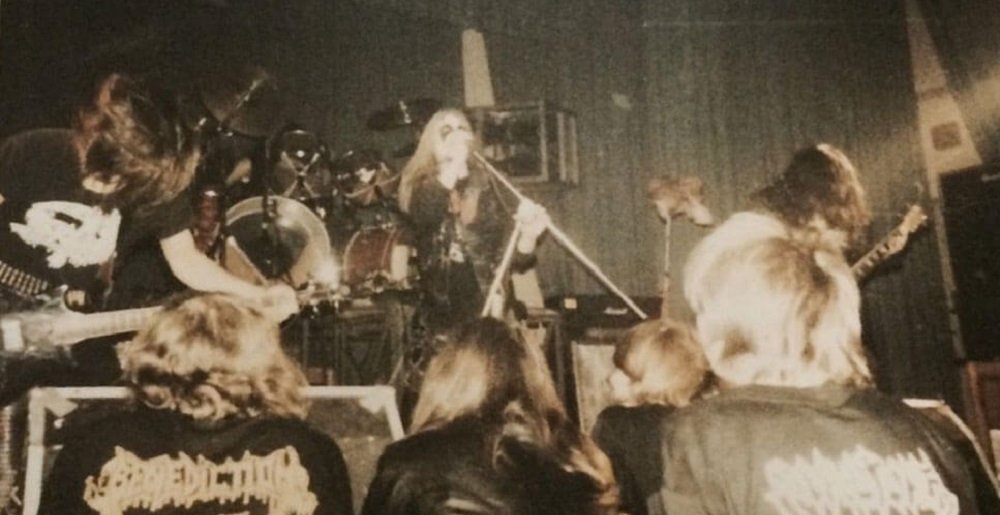 On December 15, Mayhem will return to Leipzig to celebrate their most iconic gig. Although it won’t be their first time back, it’s bound to be their most meaningful. Mayhem’s Live in Leipzig was recorded on November 26, 1990. Yet, it wouldn’t be released until 1993 — by then, two members had tragically passed away. This highly influential album is one of the few recordings we have featuring Mayhem’s “golden lineup”: “Euronymous,” Øystein Aarseth (R.I.P.: 1968-1993); “Dead,” Per Yngve “Pelle” Ohlin (R.I.P.: 1969-1991); “Necrobutcher,” Jørn Stubberud; and “Hellhammer,” Jan Axel Blomberg.

Mayhem’s upcoming “30th Ritual Concert” was delayed by two years, which is actually fitting considering that their 1990 tour was a complete disaster. The fabled tour in question was, unfortunately, the only time that Mayhem was able to perform abroad with Pelle — not only the most charismatic black metal vocalist of all time, but also the luminary who imbued the subgenre with its mysticism. Back then, Mayhem’s travels were made possible by the low cost of Interrail passes, hellish accommodations, and the willingness to go hungry.

Germany, the first stop on the agenda, seemed chaotic since it had been reunited the month prior to Mayhem’s arrival. Before Leipzig, Mayhem played a show in Annaberg-Buchholz and then another in Zeitz. (The result of the latter was released as part of Peaceville Records’ 25th anniversary edition of Live in Leipzig in 2015 and separately as Live in Zeitz the following year.) All three dates were organized by Euronymous’ pen pal Abo Alsleben.

In Leipzig, the entire band struggled with breathing issues due to air pollution from coal. Prior to their gig, Mayhem endured a sleepless night on the floor of a “squat” whose inhabitants had recently fended off a Nazi attack. The show itself was held in the cult club Eiskeller, where Manos served as the opening act. In The Death Archives: Mayhem 1984-94, Necrobutcher recalled:

“I made my way over to the mic pretty often during the Leipzig gig to scream unpleasantries at the audience. They sucked the energy from me. They just stood there with no reaction. I needed more feedback to get going. In pure desperation, I yelled, ‘Come on, Leipzig!’ There was still no response.”

During the concert, Mayhem performed four out of the eight tracks that were destined for their classic debut album, De Mysteriis Dom Sathanas (1994) — “Freezing Moon,” then titled “The Freezing Moon”; “Funeral Fog”; “Pagan Fears,” and “Buried by Time and Dust” — as well as material from Pure Fucking Armageddon (1986) and Deathcrush (1987). Pelle actually didn’t care much for Deathcrush’s “gore,” which he perceived as “trendy,” as opposed to real. We can thank Pelle for most of the brilliant lyrics to De Mysteriis: These, by contrast, reflect his true vision. The masterpiece’s title, for which Pelle was also responsible, actually appeared on posters for the Leipzig event.

Although Pelle was thrilled that he was able to cut himself at Eiskeller, he nearly passed out backstage as a consequence. In a letter to his Italian correspondent, “The Old Nick,” Pelle mentioned that Mayhem was able to use impaled pig’s heads to start a “great metal war,” which most audience members seemed to “enjoy.” He also expressed his satisfaction with East German metalheads. On a less positive note, Necrobutcher remembered that a railroad strike complicated Mayhem’s exit.

Post-Leipzig, most of Mayhem returned to Norway to pick up their welfare checks. At home, the band misread a letter from Rotting Christ’s Sakis Tolis and thus believed that their plans for Greece had been cancelled. En route to Turkey, Pelle experienced nosebleeds caused by malnutrition. Mayhem’s İzmir gig was famously brought to a halt as a result of an agreement made with the police behind their backs. Mayhem decided not to risk playing their second Turkish show due to the threat of the Gulf War. Although Euronymous had some positive recollections of Turkey, the rest of the band reported suffering. Mayhem then left Holland, their last destination, without performing because they couldn’t reach Asphyx’s Bob Bagchus, who had booked them.

For the whole tour, Mayhem hardly saw any of the money they were owed; Pelle’s wallet was even stolen at one point. For the better part of their homeward journey, Mayhem was forced to live on about four Snickers bars. After all, those were the days when Mayhem’s ambitions rarely even materialized. Among the things that fell through were Pelle’s plans for gigs in his native Sweden.

Pelle, who took his life on April 8, 1991, was never able to record a studio album with Mayhem — only a couple of tracks in 1990 that appeared on a 1991 compilation. These appeared on the original version of Live in Leipzig. Other recordings starring Pelle include rehearsals from the Henhouse and the Sarpsborg concert that took place February 28, 1990, to raise money for Metalion’s Slayer Mag. The Sarpsborg evening — Mayhem’s second full show with Pelle — has been immortalized by the highly unethical bootleg The Dawn of the Black Hearts (1995), which Mayhem has reclaimed as Live in Sarpsborg (2017). Of course, Pelle’s pre-Mayhem work with Morbid, whose roster featured future-Entombed’s Ulf Cederlund and Lars-Göran, is another must for all metalheads.

Looking back, it’s incredible to think that Necrobutcher never wanted the Leipzig gig to be released. He confessed in his book: “We decided that the recording wasn’t good enough and I knew we could do better. A couple of years later Øystein made a deal with Robert Mammarella at the Italian Obscure Plasma label to release the recording as a tribute to Pelle.” In fact, the gig was so magical that it even makes the album’s horrendous sound quality seem like an asset — the greatest testament to Mayhem’s genius. Yet, even before the “official” version dropped, the Leipzig tape had been circulated. Even Darkthrone had a copy.

The photo of Pelle holding a candelabra that sometimes appears on the front of Live in Leipzig has been recreated by generations of musicians. (The cover of Darkthrone’s Transilvanian Hunger [1994], which was sent to Peaceville in 1991, bears a strong resemblance.) On this record, you can hear Pelle embracing what Mayhem had been while also determining the future of black metal. Live in Leipzig represents the height of extreme music insofar as it captures Pelle progressing on his journey toward “The Mysteries.”

Behold sonic blasphemy in all its sweaty glory!