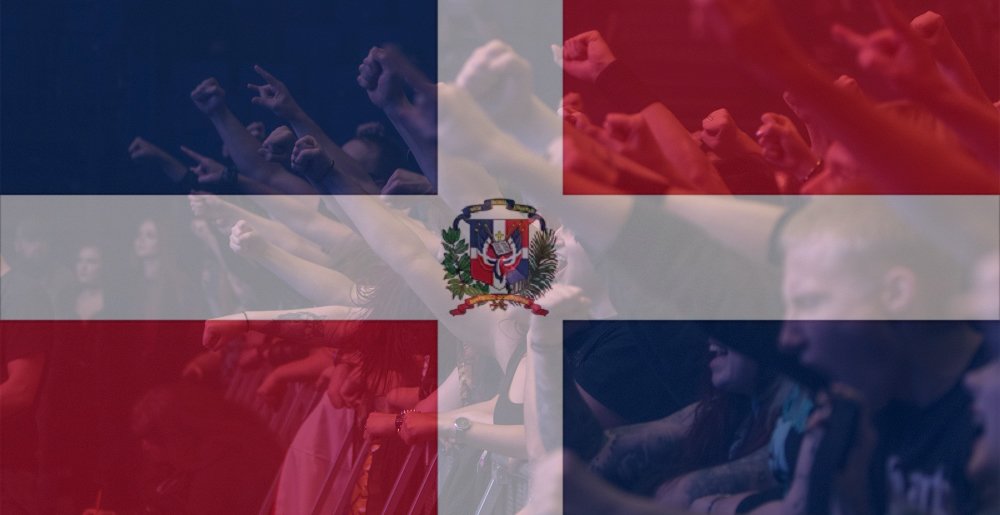 The Caribbean nation known as the Dominican Republic is renowned for its beaches, rainforests, resorts and (if you’re so inclined) golf, making it one of the most popular destinations for sun-seeking tourists. In an average year, the island sees about five million visitors. The Christopher Columbus-founded capital city Santo Domingo was the first European settlement of the new world, meaning the city has a rich history which can be seen with structures like Catedral de Santa Maria La Menor, finished in 1540.

When it comes to metal music, however, the Dominican Republic may have less history, though the bands produced in the country are as flavorful as a shot of the country’s finest rum. Fill up your cup, do some whale-watching and check the links for 15 of the best metal bands from the “Nature Island of the Caribbean.”

Formed in 1987, Abaddon RD are the Dominican Republic’s “premier metal band.” They started as Abaddon, changed their name to Masacre and broke up in 1991 before getting back together in 2000 as their current moniker. They’ve released banger after banger since their reformation, with albums like Animal Bizarro and Tragic Eternal Mutation bringing that classic thrash sound which is hungry for the kill.

Meaning “ancient,” Santo Domingo’s Archaios are a melodic death metal band who previously played as Legion before changing their name in 2003. They have released two full-lengths, Out of the Shadows in 2005 and The Distant in 2011. The band waxes about existentialism and despair on some seriously intense tracks which are filled with atmospheric keyboards and the occasional melodic solo to counterbalance the brutality.

Stoner and doom metal is almost as scarce in the Dominican Republic as a snowy day, yet with Santiago de los Caballeros’ Hereje, the people of the Republic get enough of a fix to satiate that occultish, misanthropic craving. The three-piece band was formed in 2021 and the year after they released their first album, Burn! featuring a thought-provoking album cover featuring fire and religion – though it’s not the stale and overdone church burning you’d expect.

The Dominican scene sees some musicians creating multiple bands to fill out the metal scene more thoroughly. With Fosk, we get a few members from Hereje – Morbid and Odanozarocsed, whom partner up with vocalist Luis Alberto Toribio for this black metal project. They have released one album as of 2022 – Apokatastasis – a term that, in Christianity, means the ultimate salvation for everyone including the damned. With the reaper on the album cover and a hideous eye above it gazing from the sky, it’s clear that there will be no salvation or forgiveness here.

Santo Domingo’s Soul of Death was formed in 2004, being a melodic death metal force in the Dominican Republic ever since. Lyrical themes include tasty topics like ancestral war and apocalyptic prophecies, which can be found on the few releases they have out thus far. To prove that the band is still a force to be reckoned with, they posted “We are not vanquished, we are not beaten, we´ve gotten in some turmoil but now we are rising again… with the same strength, same brotherhood…yet more power and more thirst for blood!” They showed this blood thirst with the release of their Spiritual Disease single in 2020.

The black metal scene in the Dominican Republic is small but as with other countries where there are only a handful of such bands, the few that exist are of high quality. Innsmouth was formed in 2004 by members Corpse (Cult of Hate, Malefic) and Heretic (whom went on the join Demized in New York). Their career spans just a few EPs and singles, culminating in the live album Live Manifesto, released on VM Records (also owned by Corpse), which also released albums by other Dominican black metal bands like Council of Heresy and Haceldama.

VM Records owner and Innsmouth guitarist Corpse teamed up with guitarist Clandestine (Haceldama) to form this brutal death metal band in 2011. While Corpse only played on Infected Omnipotence’s debut Global Infection EP, the band remains a brutal bulldozer. While they are brutal, their sound has an old school, goregrind type of flair with a lot of vocal variation, meaning you won’t be suffocated in constant gutterals.

A one-manned project sounding like an army is going at it on your headphones, Sífilis de Nazareth was created by the guitarist Focalor in 2015.

Combining black metal, thrash and the occasional acoustic intro, Sífilis de Nazareth is another card carrying member of the anti-Christian club in the Dominican Republic, with the aptly-titled EP Anticristo Pandemonio being another sweet sacrilegious whisper in your ear when you’re in need of one.

La Armada is a mixed bag of styles – grindcore, hardcore, crossover and powerviolence. They are also of mixed locations – starting in the Dominican Republic but moving to Chicago in 2007. Most of the band’s material came out after their migration to the windy city, such as the two-part Anti-colonial albums – the latest coming out in 2022. Wherever they may be, the message remains the same in La Armada’s sound – “Checkmate Humanity.”

Meaning “night owl,” Múcaro are another one of the rare, slow, sludgy bands building up muck in the Dominican. Made up of Soul of Death’s Ruben Mahfoud, former Abaddon RD drummer Manuel Mueses and vocalist Josue Garcia, Múcaro is fuzzed-out psychedelic bliss, with their Jinete del sur (south rider) album bridging the gap between ‘70s rock swagger and the thick, modern production of current stoner bands. Stoner, sludge and doom fans – don’t overlook this diamond from the Dominican.

The two-man groove metal crew called Batu have been going at it since 2014, releasing four volumes of albums. Their latest, Vol. 4: Toxicolandia shows, as System of a Down would say, the toxicity of the city – with a man in a gas mask in front of a wasteland of a metropolis on the album cover. Batu’s sound is a unique one – chanted and often spoken lyrics, power chords and background atmospherics paint a picture of social commentary that will have listeners who only know English running to Google Translate to get the whole story.

Peace? Love? Well, some band had to say it. AntiHippie emerged in 2013 with an injection of groove metal and hardcore with their EP 666. Songs like “Skinhead Maricon” and “Perico” being venomous commentaries on drug use and racists, the band is a focused and refined blow to the guts with no traces of sympathy or beating around the bush. AntiHippie beats and burns said bush.

Not to be confused with the New York death rapper by the same name, Necro are one of the OGs of the death metal scene in the Dominican Republic, blasting out of Santo Domingo in 1995. Listen to their album VI for a gaze into the ‘90s death metal sound of the country – which is savage and at times surprisingly ethereal. Bassist Ariel Nux went on to play in industrial metal band Nux, who we will cover below.

Rarer than the stoner, doom and sludge genre in the Dominican Republic is the fresh ‘90s sound of industrial metal. Nux started out as Phantom in 1996 and changed their name in 2000, releasing two albums since the dawn of the new millennium. When I hear a band is industrial metal, I will assume that they sound akin to Rammstein, and Nux is no different, with chugging riffs, keyboard bedazzlement and chanted/occasionally sung vocals culminating in quite catchy songs.

Dominus Dominantium, meaning “king of kings and lord of lords” taken from the inscription “Rex Regum et Dominus Dominantium” are a symphonic metal band who formed in 2016. Dominus takes on a theme of Christianity and the impending apocalypse. Chained: The Epiphany ov the Soulless is a nine-act epic featuring clean female singing mingling with demonic masculine vocals and Doug Bradley-esque monologues, while the instrumentation is as top notch as any Fleshgod Apocalypse release.

Metal Sucks Greatest Hits
690 -
Let’s Argue About Iron Maiden Album Art
0 -
Unearth are the Slayer of Metalcore
0 -
Joey Jordison Claims He Was Fired from Slipknot Via a Singing Telegram
0 -
The Best Metal Albums of 2013, As Chosen by Metal Musicians Themselves — Part I: Machine Head’s Robb Flynn
0 -
Rigged: Testament Guitarist Alex Skolnick
0 -
Report: “The Number of Heavy Metal Bands in a Given Country is Associated with its Wealth and Affluence”