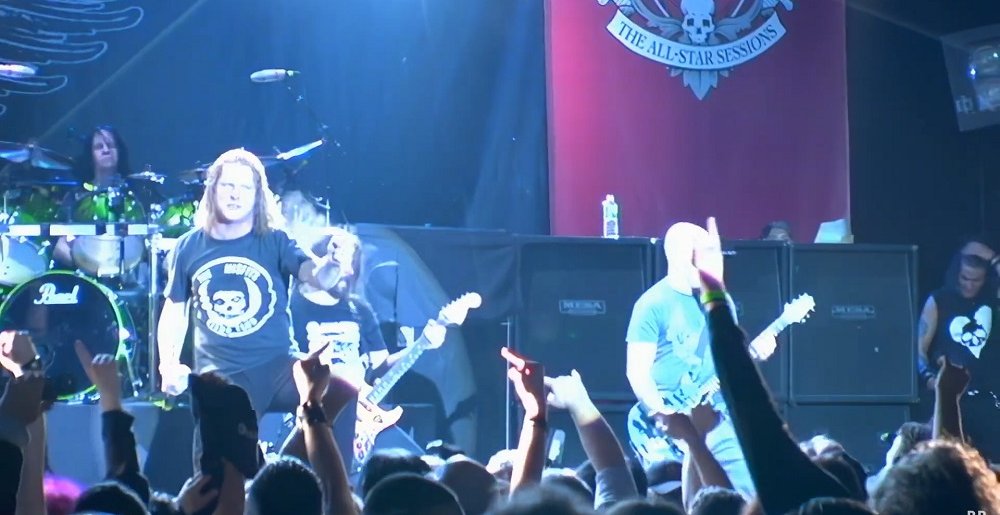 Nearly eighteen years ago, concertgoers in New York City got to witness something truly special. On December 15, 2005, Roadrunner Records held a special event at the Nokia Theatre to celebrate their 25th anniversary, as well as the release of Roadrunner United’s The All-Star Sessions. It was a massive celebration that saw artists under that label’s umbrella get together and perform some sick fucking tunes.

In the years since, the performance has been something of legend, with some of our favorite musicians sharing the same stage and playing each other’s hits, as well as some original tunes written for Roadrunner United.

To commemorate that event, and to celebrate the release of the live concert from that December night, Roadrunner just released footage of Slipknot’s Corey Taylor, Paul Gray, and Joey Jordison joined on stage by none other than Scott Ian of Anthrax to cover “(sic).” It’s a crushing rendition of an already badass song from Slipknot’s breakthrough self-titled album.

Looking back on the event, Scott Ian said it was a special evening that he still looks back on fondly.

“It was incredible to be part of a lineup of such insanely heavy hitters. WOW. And to have had the opportunity to play with Joey and Paul that night, with Corey singing — definitely a Make-A-Wish moment for me.”

The original All-Star Sessions album and the live concert will be available in multiple configurations via Roadrunner Records on March 10. And while you can check out footage of “(sic)” and “The End” online, you can preorder yourself a copy of the entire experience today.

THE ALL-STAR SESSIONS TRACK LISTING:
“The Dagger”
“The Enemy”
“Annihilation by the Hands of God”
“In the Fire”
“The End”
“Tired ‘n Lonely”
“Independent (Voice of the Voiceless)”
“Dawn of a Golden Age”
“The Rich Man”
“No Way Out”
“Baptized in the Redemption”
“Roads”
“Blood & Flames”
“Constitution Down”
“I Don’t Wanna Be (A Superhero)”
“Army of the Sun”
“No Más Control”
“Enemy of the State”